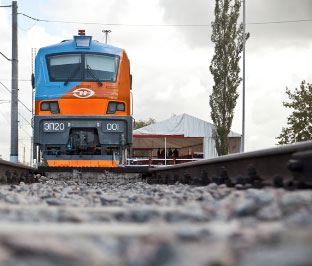 The EP20 locomotive is the first in the series of the new Alstom-TMH joint product range.

Transmashholding and Alstom have handed over the first series production EP20 electric passenger locomotive to the Russian Railways at Novocherkassk Plant (NEVZ)1 in the Rostov region (Russia), where they are being manufactured. The ceremony was chaired by Dmitry Medvedev, Russian Prime Minister and attended by Valentin Gapanovich, Senior Vice President of Russian Railways, Vasily Golubev, Governor of Rostov region, Andrey Bokarev, CEO of Transmashholding and Patrick Kron, Chairman and CEO of Alstom. The EP20 locomotive is the first in the series of the new Alstom-TMH joint product range.

The EP20 locomotive is the first in the series of the new Alstom-TMH joint product range developed by engineers from both companies within the TRTrans engineering centre. Held by Alstom Transport and TMH on a parity basis, TRTrans employs 150 engineers and develops railway rolling stock. TRTrans was created in December 2011.

The EP20 is the first Russian electric passenger locomotive which can run at a maximum speed of 200 km/h and the first of this kind to be produced in Russia. The main advantage of the EP20 is its dual-system (3kV and 25 kV) allowing it to operate on tracks, which are electrified both with direct and alternative current. The locomotive is equipped with asynchronous traction drive which allows a significant reduction in life cycle costs, with longer intervals between maintenance operations and significant energy savings.

In 2012–2013, the locomotives will be delivered at a rhythm of three units per month to the Russian Railways which plan to operate the fleet on the Moscow-Sochi route for the 2014 Winter Olympic Games.

The contract for the delivery of the 200 EP20 dual-system new generation passenger electric locomotives was signed by Vladimir Yakunin, President of Russian Railways OJSC, and Andrey Bokarev, Chairman of the Board of Directors of Transmashholding CJSC, in May 2010 in Sochi, as part of the 5th International Business Forum “Strategic Partnership 1520.”

The second product jointly developed by TMH and Alstom is a freight AC locomotive with asynchronous traction drives, 2ES5. Such locomotives have never been produced in Russia before and the first 2ES5 was presented to Prime Minister during his visit to NEVZ.