The Russian certification authority, the “Register of Certification on the Federal Railway Transport”, issued its approval for the Desiro RUS regional multiple-unit train… 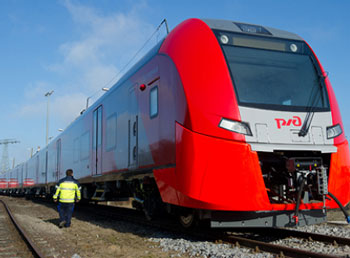 The Russian certification authority, the “Register of Certification on the Federal Railway Transport” (RS FzhT), yesterday issued its approval for the Desiro RUS regional multiple-unit train. The certification runs began in June 2012 and were successfully completed by the end of November. “We finished three months ahead of time. This is attributable to the clear general conditions and our close collaboration with the customer,” said Jochen Eickholt, CEO of the Siemens Rail Systems Division. This was possible because the demanding certification process and the intensive acceptance tests conducted by Russian Railways (RZD) were carried out in parallel. Tests were also performed on five trains at the same time. The Desiro RUS has to satisfy Russian standards to obtain certification. Not only the entire train, but also the individual train components have to be certified as proof of compliance with the standards. The first step was to obtain certification for over 60 components. They include the air conditioning system, audible signal devices, wheels, axles and bogie frames. The second step was to test the parameters of the train as a whole, such as derailment protection, electromagnetic compatibility and braking behavior.

As the train needs to be able to run without impairment at temperatures as low as -40 degrees, all components were subjected to corresponding tests. The tests took place in the Rail Tec Arsenal (RTA) climatic wind tunnel in Vienna, Austria. The purpose of the tests with artificial wind, ice, rain and snow is to check the functionality of the coupler, the doors or the windshield wipers, for example. While the vehicle is being sprayed with artificial snow from the outside, some 150 sensors monitor the heating and air conditioning on the inside. Humidifiers arranged on the floor and heating mats on the seats simulate passengers on board the train. The tests and evaluation of the results at RTA alone took about ten weeks altogether.

The RZD order for 38 Desiro RUS regional multiple-unit trains in December 2009 was worth around 410 million euros. Manufacture for the entire order has been in progress at Siemens’ Krefeld plant, Germany, since April 2011. Delivery started in February 2012, with the first Desiro RUS being shipped to Russia from the ferry port of Sassnitz, Germany, on the island of Rügen in early March 2012.

At the InnoTrans rail trade fair in September 2010, RZD placed an order for a further 16 units to be built with an increasing amount of local content in Russia as from the end of 2012. This order is worth 170 million euros. RZD has also concluded a maintenance contract with Siemens for all 54 of these vehicles. This contract has a term of 40 years and is worth in excess of 500 million euros.

Then, in September 2011, RZD ordered the biggest tranche so far of 1,200 more cars of the Desiro RUS regional train from LLC Ural Locomotives, a joint venture company set up by Siemens and the Russian rail manufacturer Sinara. The order has a value of about two billion euros. Production of the cars at the LLC Ural Locomotives works near Yekaterinburg is due to start in 2013.

Technically speaking, the Desiro RUS for Sochi, which RZD has named “Lastochka” (Russian for “Little Swallow”), is based on the Desiro ML vehicle platform. The vehicles underwent further development especially for the Russian market: for example, they have been designed for a temperature of – 40 degrees, with a carbody width of 3,480 mm, a floor height of 1,400 mm, and bogies for a gauge of 1,520 mm. Thanks to the flexibility of the interior layout adopted from the Desiro ML, the Desiro RUS will able to meet the special requirements for operation during the Winter Games in 2014. Although the games will be based in Sochi on the Black Sea, these trains have to be able to negotiate gradients of 4% to provide connections to the sport venues in the nearby mountains. So the Desiro RUS offers a solution for mass transit and regional services in Russia.