Southeastern has won a Rail Business Award for its efforts in making the railway safer for staff and passengers. 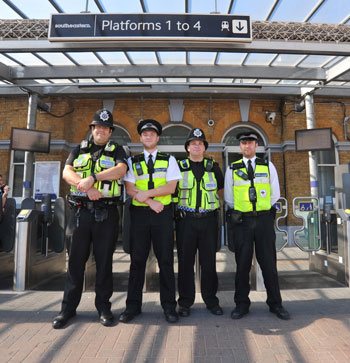 Southeastern has won a Rail Business Award for its efforts in making the railway safer for staff and passengers. The company, in partnership with the British Transport Police (BTP) has been successful in reducing the number of incidents of assault, robbery and violence on the south east rail network by nearly half – making the railway one of the safest places in the community. Alison Nolan from Southeastern said: “The safety and security of our passengers and staff is paramount. We’re working to do everything we can to discourage anti-social behaviour and ensure people travelling on our trains can do so safely. Since we commenced running the rail franchise in 2006 we’ve increased the number of Rail Enforcement Officers (REOs) from 44 to 70, strengthened ties with the British Transport Police and targeted our most vulnerable stations and lines of route with extra support. In doing so, we’ve been successful in reducing incidents on our network by 40 percent.”

REOs play a vital role in supporting the British Transport Police to patrol the rail network and are specially trained to make arrests and eject passengers from the network who’re causing harm or distress to other passengers and staff. Southeastern has also invested heavily in CCTV on trains and stations and introduced an EyeWitness scheme.

Ms Nolan said: “Under the EyeWitness initiative, dedicated REOs based in the central control monitor CCTV, receive live reports from staff and other officers on the ground and coordinate an emergency response using the Airwave emergency services radio. Anyone travelling on the network can report incidents or concerns directly to the REOs by simply sending an email to the Eyewitness address.”

The Rail Business Awards are in their 15th year and celebrate the UK rail sector’s success. Southeastern’s business development manager, Mike Boden also received a Highly Commended award for his work and contribution to Southeastern’s successful transport plan for the London 2012 Games. The company was also a finalist for the following categories:

For further information about the awards visit: www.railbusinessawards.com