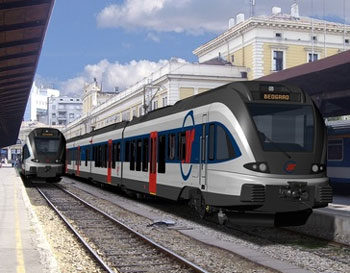 Serbian Railways (ŽS) has ordered 21 electric FLIRTs (Fast Light Innovative Regional Train) from Stadler Rail for commuter rail services in the Belgrade region. The contract worth around EUR 100 million was signed today in Belgrade. The order is being financed by the European Bank for Reconstruction and Development (EBRD) in London. The vehicles will be delivered in two-week intervals between autumn 2014 and late summer 2015. The trains are very environmentally friendly due to their low energy consumption. Today, at the headquarters of ŽS in Belgrade, Dragoljub Simonović, Executive Director of ŽS, and Peter Jenelten, Executive Vice President Marketing & Sales at Stadler Rail, signed the contract for the procurement of the 21 new trains. The trains ordered are latest-generation four-carriage FLIRTs. Based on the FLIRT, which has sold over 800 units over the last 10 years, Stadler has developed the next generation, FLIRT3. This latest range of trains is made up of various modular sub-ranges. Peter Jenelten is very pleased about the order: “We are proud that we were able to win this EBRD-financed invitation to tender. The new FLIRT trains will allow ŽS to set new standards in regional transport. And it is our first FLIRT order in South-Eastern Europe.”

The trains have an electric drive for a voltage of 25 kV, 50 Hz. The maximum speed of the modern trains is 160 km/h, and they can be used for three-way traction. The carriage areas can all be accessed without steps and have 234 seats, including 14 tip-up seats and 12 seats in 1st class. The FLIRTs incorporate spacious multifunctional compartments in the entrance area for wheelchairs, prams and bicycles, a wheelchair-accessible toilet and air-conditioning. Emergency intercoms allow passengers to contact the driver.

The trains will initially have an Indusi train control system, with a subsequent upgrade to the European ETCS 2 standard included at the planning stage. The vehicles are made of lightweight aluminium and are therefore low in weight. This means they can accelerate faster, thus significantly reducing energy consumption and operating costs in comparison to conventional vehicles.

Each of the four bodies has one passenger door per side to meet the requirements of Serbian Railways. This highlights one of the real strengths of the FLIRT3 concept: the number of doors and various other features can be adapted variably to meet the customer’s requirements.