Under the theme ‘good is good, but better carries it’, voestalpine Schienen GmbH will showcase the latest fruits of its target-oriented track solution approach at this year’s InnoTrans trade show. 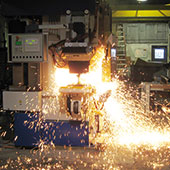 Rail technology leader – voestalpine Schienen GmbH – is again opening a window to the future of customer benefit. Under the theme ‘good is good, but better carries it’, the company will showcase the latest fruits of its target-oriented track solution approach at this year’s InnoTrans trade show, including:

The heat treated hypereutectoid steel grade 400 UHC® HSH® combines an extraordinary hardness with a resistance toward rolling contact fatigue and corrugation not known from any other commercially produced premium rail. Thus, as claimed by voestalpine, operational availability can be doubled on mixed traffic tracks and maintenance costs halved – even in comparison with basic heat treated rail steels.

A heat treated rail steel grade with reduced carbon content. Its unique chemical composition in combination with an adjusted heat treatment process makes deposit welding in track – without any pre-heating of course – as simple as for standard grades, while the hardness corresponds with that of conventional premium grooved rails.

An area which voestalpine Schienen will work on in the future even more intensively than already up to now, aiming to generate maximum customer benefit in the rail system.

Visitors will be welcomed at the new large voestalpine stand at InnoTrans in Hall 21b which is featuring themed zones to focus on the distinct issues.