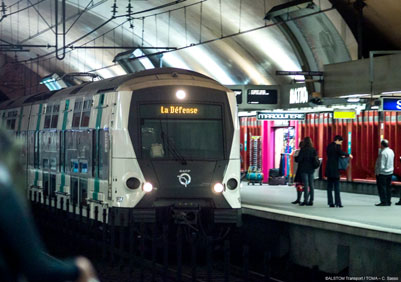 STIF1 has ordered a further ten MI09 double-deck trains from the Alstom-Bombardier consortium. The total amount of the contract is €150 million, including €95 million for Alstom. This order relates to a purchase option on a contract awarded to the Alstom-Bombardier consortium in 2009. The new trains – which will be delivered during 2017 – will operate on the RER2 line A, which carries 1.2 million passengers per day, making it the busiest regional line in Europe. The new order aims at strengthening the line’s performance by increasing trains capacity and frequencies. It goes along operations that are related to a performance master plan being conducted on the line. “The MI09 is the only train able to absorb a flow of over a million passengers a day, enabling RATP to smooth the traffic on its network. Priority was given not only to the  capacity but also to traction performance and passenger comfort,” says Ana Giros, Senior Vice President of Alstom Transport France.

Each MI09 train can carry up to 1,725 people at a maximum speed of 120 km/h. The 110 metres train is composed of five cars, each with three wide doors on each side to optimise passenger flow in stations. Its high-performance electric braking system reduces the train’s energy consumption. A train-ground Wi-Fi link transmits operating parameters for the train, making it possible to anticipate maintenance operations and guarantee a reliable service.

The MI09 trains are designed and built in France at Alstom’s industrial site in Valenciennes. The five other Alstom sites involved are Ornans for the traction motors, Le Creusot for the bogies, Tarbes for the traction equipment, Petit Quevilly for the traction transformers and Villeurbanne for the onboard computer systems.

The MI09 trains previously ordered and currently in service on the RER line A have already covered more than 19 million kilometres.