The third meeting of EU-Japan Industrial Dialogue on Railways got underway in Brussels yesterday highlighting critical topics addressed in the EU-Japan Free Trade Agreement (FTA) negotiations. The Industrial Dialogue meeting, organised by the European Commission and Japanese government and joined by The European Rail Industry Association (UNIFE) and Community of European Railway and Infrastructure Companies […] 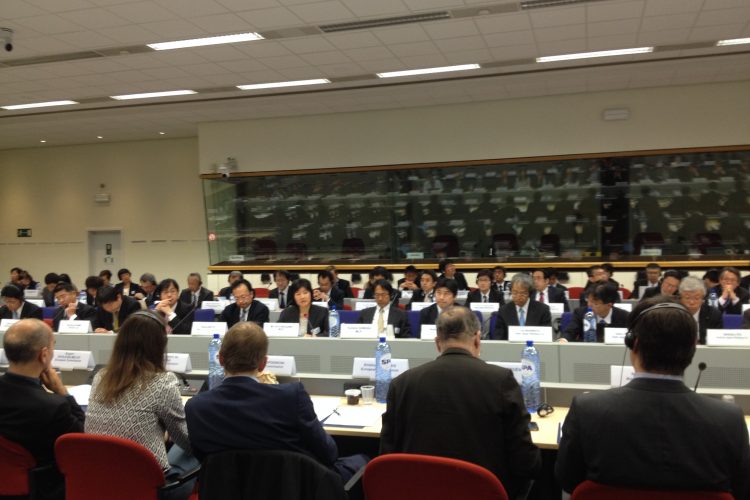 The Industrial Dialogue meeting, organised by the European Commission and Japanese government and joined by The European Rail Industry Association (UNIFE) and Community of European Railway and Infrastructure Companies (CER), facilitated exchanges following the tenth round of negotiations held in April in Tokyo.

It was also organised at a critical time, since the EU-Japan political summit will be held on 29 May, where Japanese and European leaders will take stock of the progress made in the FTA negotiations, among other topics.

UNIFE and CER state their support for the Industrial Dialogue initiative as an additional channel to monitor mutual market access and discuss mutual recognition of safety standards. The organisations welcome the possibility to have discussions with both the public and the private sectors to ensure effective and comparable rail market access between the EU and Japan. Moreover, UNIFE and CER support the involvement from DG MOVE, the European Railway Agency and CEN-CENELEC in the discussions on rail safety and call for further exchanges to facilitate the negotiating process. UNIFE stressed that the third Industrial Dialogue meeting was an opportunity to draw negotiators’ attention to the major obstacles to European access to the Japanese rail market. During discussions on procurement, UNIFE and its members called upon the Japanese government to ensure a transparent and open procurement system for rail entities. UNIFE asserts that if a true level playing field were to exist between the rail markets, EU rail suppliers could expect to be considered and have a fair chance to win major contracts with the Japanese railway undertakings, as Japanese suppliers have been awarded major contracts in the EU. UNIFE also made recommendations for improvements in procurement procedures and information available to EU companies.

UNIFE Director General, Philippe Citroen, said: “UNIFE has high expectations with respect to market access coverage, the Operational Safety Clause and regulatory cooperation, and calls for a comprehensive agreement on rail to achieve a true level playing field between the European and Japanese rail markets.”

CER reiterated the support of the European rail operators and infrastructure mangers for an EU-Japan Free Trade Agreement that facilitates business opportunities for all market players.

CER Executive Director, Libor Lochman, said: “CER commends the aim of the EU-Japan Free Trade Agreement to facilitate trade and business opportunities between all market players in the railway sector. European rail operators have a long history of cooperation with Japanese operators, which includes sharing best practices, but also the provision of services by CER members such as feasibility studies and staff training. I am convinced that a fair FTA will bring further business opportunities for the European railway undertakings.”