The Government has approved a £360 million contract to supply 29 Hitachi high speed trains to First Great Western for services between London and Cornwall in 2018. The Government approved contract will allow the privately funded £360 million fleet of Hitachi AT300 trains to replace the 40-year old intercity trains currently service the Paddington to […] 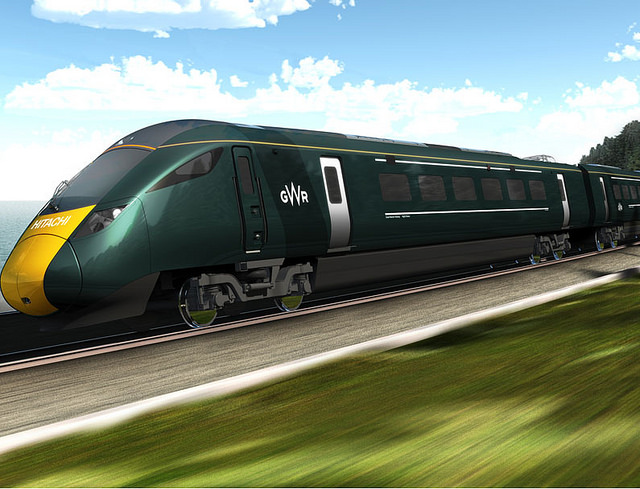 The Government has approved a £360 million contract to supply 29 Hitachi high speed trains to First Great Western for services between London and Cornwall in 2018. The Government approved contract will allow the privately funded £360 million fleet of Hitachi AT300 trains to replace the 40-year old intercity trains currently service the Paddington to Plymouth and Penzance route. The state of the art trains will have up to 24 percent or 1,000 additional peak time seats into and out of Paddington every day.

Rail minister Claire Perry, who visited Exeter to mark the announcement, said: “These new trains will make a real difference to the millions of commuters, business travellers and tourists who use this route every year.

“This industry initiative goes hand-in-hand with the work this Government is doing to reverse decades of underinvestment in transport infrastructure in regions like the south west. This will not only mean better journeys for customers, it will also help to secure long-term economic growth across the country. Like the new IEP trains serving cities in the North of England, this new fleet will help to open up the region for investment.”

The new trains consisting of 7 nine-car and 22 five-car bi-mode trains, due to enter service in 2018, will cut journey times from London to Exeter by up to 5 minutes, to Plymouth by up to 6 minutes, and to Penzance by up to 14 minutes. The mixed fleet has been designed for flexible usage creating the option to couple two five-cars into a 10-car formation.

Karen Boswell, Managing Director for Hitachi Rail Europe said: “Today’s announcement builds on our significant and sustained investment in the British rail sector. This contract with First Great Western recognises the quality of Hitachi’s high-speed trains and our world class engineering capability. Hitachi Rail Europe is committed to delivering trains for the UK’s fare-paying customers that are genuinely transformative in terms of speed, capacity and comfort. This new fleet will be a revolution in customer experience for those travelling to and from the south west, and we look forward to delivering these Hitachi trains for use from 2018 onwards.”

The 29 AT300 trains are closely related to the Class 800 bi-mode trains designed for the Department for Transport’s Intercity Express Programme (IEP). However, they will use higher engine operating power to cope with the gradients in Devon and Cornwall. The vehicles will run as electric trains between London and Newbury, and are equipped with bigger fuel tanks to cater for the long distance journeys to Plymouth and Penzance.

Plans to purchase the new trains were submitted by First Great Western following Government approval of a franchise agreement which sees the operator continue to run services on the south west route.

Mark Hopwood, Managing Director of First Great Western said: “We warmly welcome the announcement today that our recommendations to introduce a new fleet of trains to serve customers between Devon and Cornwall and London have been approved by the Department for Transport.

“We know how important the railway is to the economies and communities of the South West, and today’s agreement is fantastic news for the region and the rail industry as a whole. These trains will help us deliver faster, more frequent services into the South West, each providing a 14% increase in seats across the routes once they are all in service.

“Following this we have now formally finalised the agreement with Hitachi Rail Europe and Eversholt Rail, which will see the first trains in service in the summer of 2018.”

Burges Salmon, legal advisors to First Greater Western Limited, commented on the AT300 procurement: “We are pleased to have advised our long-standing client First Great Western on the procurement of new rolling stock to run on its West of England Routes.  Our specialist transport lawyers supported FGW in delivering this major project to a rapid timescale, deploying our experience on major procurements, asset finance and rail.  Having the right team in place from the outset was a key part of our delivery,” said Brioney Thomas, a partner in the Rail sector group at Burges Salmon.