London Midland will continue to operate services between London, the West Midlands and the North of England until October 2017 and invest £13 million worth of improvements. Go-Ahead Group, who has a 65 percent stake in London Midland alongside Keolis who owns the remaining 35 percent, welcomed the announcement by the Department for Transport allowing […] 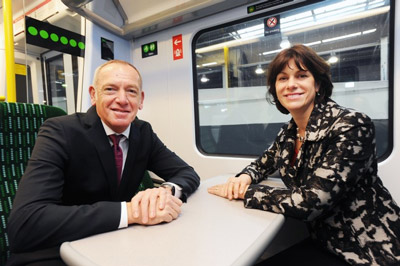 London Midland will continue to operate services between London, the West Midlands and the North of England until October 2017 and invest £13 million worth of improvements. Go-Ahead Group, who has a 65 percent stake in London Midland alongside Keolis who owns the remaining 35 percent, welcomed the announcement by the Department for Transport allowing the Govia joint venture to continue to operate the West Midlands franchise. A direct award contract has been agreed which includes introducing schemes to benefit passengers throughout the duration of the new franchise which runs from April 2016 to October 2017.

Rail Minister Claire Perry said: “We have already delivered significant improvements in the West Midlands and surrounding areas – including investing more than £60 million in a fleet of brand new trains, and the massive £750 million redevelopment of Birmingham New Street station which was completed earlier this year.

“Today’s contract with London Midland builds on this work, and will not only ensure that customers continue to benefit from better journeys, but also support long-term economic growth in the region and beyond.”

The 18 month package of improvement will introduce approximately 6,600 extra seats, free Wi-Fi and better ticketing. Other benefits will include:

Commenting on the awarded contract David Brown, Go-Ahead Group chief executive, said: “We’re pleased that the government has put its confidence in London Midland to continue operating the West Midlands franchise and also deliver further enhancements for passengers such as extra train services, free Wifi, and additional car parking at busy stations. The plans offer benefits for passengers, taxpayers and the local communities that are served.”

London Midland will also have to meet tough new targets to improve train cleanliness install CCTV on cross-city Birmingham services to improve security and equip station staff with tablets to improve the information given to customers. The operator will also be required to work with the Smart Cities Partnership to introduce smart ticketing on trains, building on the existing Swift smartcard scheme, to provide seamless and more convenient journeys.

London Midland managing director, Patrick Verwer said “Winning this contract is a great endorsement by the DfT of how London Midland is focused on improving our passengers’ journeys. Since 2007 we have invested nearly £300 million in trains and stations. Over the last two years we have significantly improved performance – cutting both delays and cancellations. Twelve months ago we delivered a further £60 million investment in 10 brand new trains. Last year we also introduced a new timetable, offering more seats and services than ever before into and out of major towns and cities and cut our Birmingham to London fares by up to 40%.

“This new franchise offers some very exciting opportunities and will bring benefits touching every element of our passengers’ journeys. It will enable us to continue delivering improvements for our customers and, as before, we remain committed to listening to our passengers and working with our stakeholders, communities and local elected representatives to make further improvements in the months ahead.”