Smart ticketing available on ScotRail routes by end of summer

Smart ticketing will soon be available across ScotRail routes bringing about the largest expansion of smartcard technology on Scotland’s railways. 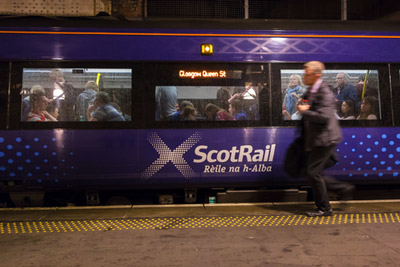 Smart ticketing will soon be available across ScotRail routes bringing about the largest expansion of smartcard technology on Scotland’s railways. ScotRail has launched its ‘Summer of Smart’ campaign highlighting the introduction of Smartcard technology across every ScotRail route by the end of summer 2016. The occasion was attended by Transport Minister Derek Mackay, in the presence of ScotRail Alliance commercial director Cathy Craig at Glasgow Central station. The introduction will mark an important step towards ScotRail’s target of 60 percent of journeys being made using Smartcards by 2019. Cathy Craig, ScotRail Alliance Commercial Director said: “Smart ticketing promises to revolutionise travel in Scotland. Our customers tell us that one of the biggest hassles they face when travelling is having to queue up for a ticket either before or after they get on the train. With Smart ticketing, the days of standing in queues are coming to an end.

“By the end of the Summer, season ticket holders the length and breadth of Scotland will be able to buy their season tickets at home or at one of our at-station ticket machines, load them up onto their Smartcard and then just tap and go. Once people move to Smart they will have access to best-value fares and will enjoy smoother journeys with less need to queue.

“The technology that sits behind our Smartcards is the same as that being used by many other transport operators. We are absolutely committed to working with these other operators to find a way to make sure that Smartcards work right across Scotland’s transport network, making travelling in Scotland a seamless, hassle free experience.”

Mr Mackay said: “This announcement is good news for rail passengers in Scotland who will start to see more Smart-enabled route options right across the ScotRail network during the summer. These will offer passengers increased flexibility and value for money whilst aligning the rail industry for future Smart ticket integration with other forms of transport as they become Smart enabled.

“As part of last year’s ScotRail franchise contract award, Ministers emphasised the need for an innovative approach to Smart ticketing within rail, which included an ambitious target to deliver an overall figures of 60 percent of journeys by Smart by 2019. The Scottish Government’s long-terms vision for Smart travel is that passengers on all forms of public transport will be able to pay for their journeys using some form of Smart ticketing.”

Scotrail has also announced further Smart ticketing options will be rolled out beyond season tickets to the majority of ticket types by 2017, all ticket types will be available on Smart by 2019, including some multi-modal tickets.