The Minister of State for Transport visited infrastructure projects in Hong Long on 03 June, under the leadership if MTR Corporation. 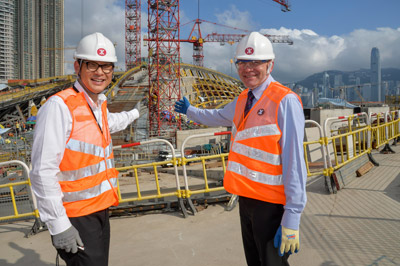 The Minister of State for Transport visited infrastructure projects in Hong Long on 03 June, under the leadership if MTR Corporation.

Mr Goodwill travelled on the Airport Express, which offers swift links between Hong Kong International Airport (HKIA) and Hong Kong’s vibrant Central business hub. The 35.3km journey between the Airport and the city takes as little as 24 minutes.

After travelling on the Airport Express to Kowloon Station, Mr Goodwill visited the future West Kowloon Terminus of the Hong Kong Section of the Guangzhou-Shenzhen-Hong Kong Express Rail Link (XRL) to see the latest works in progress.

Commenting on his visit, Robert Goodwill MP said: “I was very pleased to learn more about MTR’s impressive infrastructure projects and to see at first-hand how UK contractors are contributing advanced engineering capabilities. MTR also plays an important role in the delivery of first class transport services in the UK particularly London’s Crossrail. I’d also like to thank MTR for their excellent work on London Overground.”

Meanwhile in the UK, MTR celebrated one year of service on TfL Rail this week, which will form the Eastern section of Crossrail Elizabeth line once it fully opens in 2018.