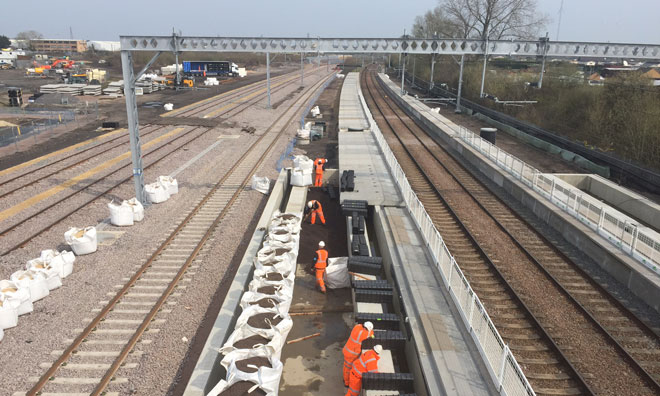 New pictures reveal how the main building at the new Cambridge North railway station is taking shape as work ramps up in the run-up to the station opening in 2017. Two lift shafts are now in place at the site of the new £50 million station which is anticipated to handle 3,000 passenger journeys a day. The new station – part of Network Rail’s Railway Upgrade Plan to provide a bigger, better railway for Britain – will alleviate the pressure on Cambridge station, where people currently leave the train in order to travel by other means to the science and business parks.

Helen Warnock, Network Rail’s Area Director for West Anglia, said: “Cambridgeshire’s newest station is now really beginning to take shape and is set to transform the way people travel around the city of Cambridge next year, giving passengers better connections and journey times and access to the business and science parks by rail.”

Lucy Frazer QC MP for South East Cambridgeshire commented: “It is great to see the project progressing to completion. Cambridge North station will vastly improve transport links in the area, particularly to the Science Park, St John’s Innovation Centre and Cambridge Business Park. Improving our infrastructure in Cambridgeshire is not only important for residents, but will also be a great economic opportunity for local businesses.”

Daniel Zeichner MP for Cambridge commented: “Passengers in and around Cambridge will be reassured that the long-awaited new station is on track – we’ve waited a long time and it is badly needed. By taking some of the pressure off the existing station, this new development offers real hope that some of the intense transport pressures can be lifted across the whole City.”

Cambridgeshire County Councillor Steve Count, Leader of the Council, added: “Cambridge North Station will be a real asset to the City and the wider area in both boosting the local economy and giving local people greater transport options. I’m delighted to see that work on the station is now ramping up and we will continue to work with partners to improve transport connections in Cambridgeshire.” Work has already taken place to build the track, points, structures to carry the overhead line cabling and power supply. Once completed, the station will have three platforms, parking for 450 vehicles and 1,000 cycles, and solar panels will provide up to 10% of the station’s power. The station is due to open in May 2017 and will serve Cambridge Science Park and the suburb of Chesterton. Funded by the Department for Transport and developed by Network Rail in partnership with Cambridgeshire County Council, Cambridge North station will provide an alternative connection point for commuters in the north east of the city and provide improved access and journey times for passengers.

It is expected that the station will encourage new businesses to the area as well as aid the expansion of existing businesses, and encourage additional employment opportunities. In the meantime, the station will serve staff already working at the Science Park and St John’s Innovation Centre.