According to reports, a Portuguese train derailed at 09:30 local time on Friday 09 September in north-west Spain. 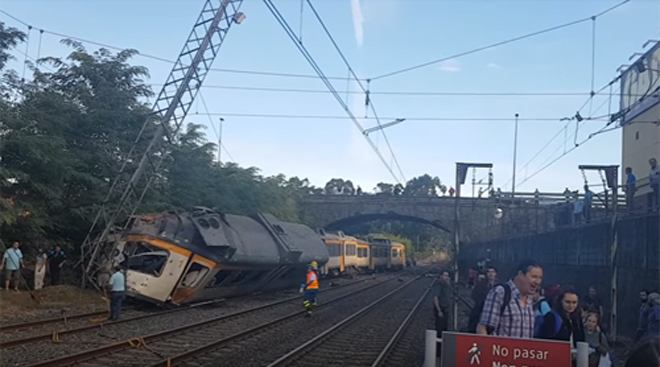 According to reports, a Portuguese train derailed at 09:30 local time on Friday 09 September in north-west Spain.

El Pais newspaper has reported a train has derailed near the station of O Porriño, Pontevedra, in north-western Spain. According to Spanish railway manager ADIF (Administrador de Infraestructuras Ferroviarias), there were approximately 60 people on board the Portuguese train traveling from the city of Vigo in the Spanish region of Galicia to Portugal’s second largest city, Porto.

Early reports suggest four people have been killed – one of which is the train driver – and up to 50 injured, with two in a critical condition.

Vigo-Porto train derailed at it entered a bend

The Spanish newspaper reports that the first car derailed 200 metres before pulling into the station, slightly damaging two other carriages.

Initial accounts suggest the vehicle came off the rails as it entered a bend; hitting a bridge and stopping after colliding with a steel tower structure.

The Vigo-Porto service has been jointly operated by Renfe and Comboios Portugal since 2011.

Prelimary investigations are now underway to determine the cause of the incident.

In July 2013, a 730 Alvia Talgo high-speed electro-diesel set derailed near Santiago de Compostela in Spain, after failing to brake from 200km/h to the mandatory 80km/h permanent speed restriction. The incident killed 79 people injured 170.