Network Rail has released time-lapse footage showing the progress of rebuilding work at London Bridge station over the course of a month. 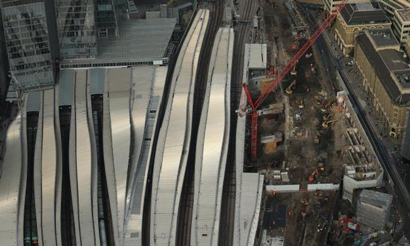 Network Rail has released time-lapse footage showing the progress of rebuilding work at London Bridge station over the course of a month.

As rebuilding work at London Bridge station moves into its final phase, a video has been released capturing Network Rail’s engineers working round-the-clock to demolish platforms 1-3 and deliver work to the tracks through the station as part of the Thameslink Programme.

Carried out between the bank holiday weekend and the end of September, Platforms 1, 2 and 3 were reduced to rubble exposing brick supports on top of the original Victorian arches. The remaining platform buildings and footbridge were demolished down to street level, making way for the final third of the new concourse to be built. Over the August bank holiday, two-thirds of the new station concourse opened to the public and newly rebuilt platforms 7, 8 and 9 came into use for Southeastern passengers. The final section of street-level concourse will open in January 2018 together with the new platforms.

Commenting on the progress, Simon Blanchflower, Network Rail’s Thameslink Programme director, said: “In August we reached a huge milestone for the Thameslink Programme with the opening of the first part of the new concourse at London Bridge. The progress we’ve made since then has been nothing short of incredible. The new station looks fantastic and understandably grabs a lot of the attention, but just as important is the work we’re doing at Bermondsey and on the approaches to the station. Ultimately, that’s what allows us to give passengers what they really want – better, more frequent and more reliable journeys.”