New look smartcard rolled out to thousands of rail passengers

Thousands of rail travellers are now be able to travel around the West Midlands the smart way using a new look Swift card.

Thousands of rail travellers are now be able to travel around the West Midlands the smart way using a new look Swift card. 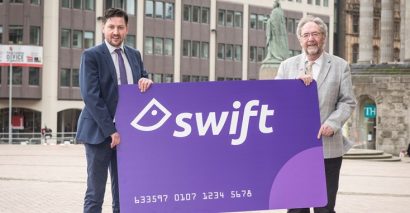 Transport for West Midlands (TfWM) has started to switch all of the 9,000 customers currently on its train direct debit ticket scheme from traditional paper tickets to the hi-tech smartcard, which has also been given a fresh new design.

It means 12,000 customers now use Swift on rail in addition to the 130,000 who already use the cards on the region’s bus and tram networks.

The train direct debit Swift cards are accepted by London Midland trains which operate local rail services in the area covered by TfWM, which is the transport arm of the West Midlands Combined Authority (WMCA).

They can also be used within the region on Virgin Trains, Chiltern Railways, Arriva Trains Wales and Cross Country trains. The cards, which can be read by train staff with hand-held equipment, will also activate ticket barriers at New Street, Snow Hill, Moor Street, University, Five Ways, Birmingham International and Coventry stations.

Cllr Roger Lawrence, WMCA lead for transport, said: “Customers no longer have to worry about getting a ticket each month, or getting stuck at a rail gate, and they will also see the cost of their monthly ticket reduced by moving over to Swift.

“Swift offers a range of benefits and passengers can be assured TfWM will continue to work on enhancing smart ticketing to support better connectivity across the wider Midlands region.”

By Transport for West Midlands (TfWM)