Transport Secretary, Chris Grayling, has opened in a new rail academy in the North West of England, which is due to train 500 apprentices over the next five years. 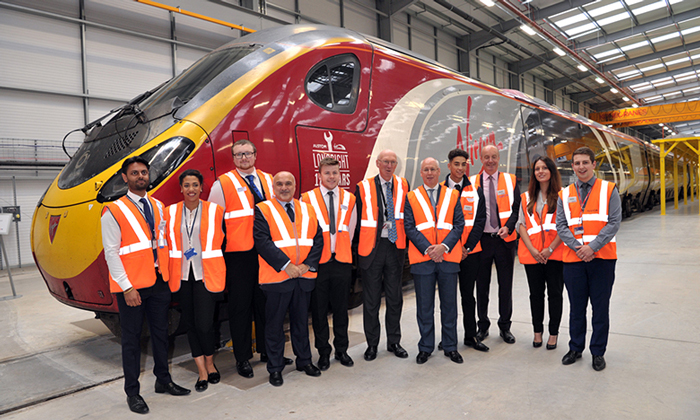 The Alstom Academy for Rail in Widnes, Cheshire, is due to take on 20 new apprentices this autumn, and offer further 30 apprenticeship places to current Alstom staff.

Furthermore, at over 13,000sq ft, it will be the largest site in the UK for this purpose and the most efficient thanks to its bespoke design, embracing highly advanced Industry 4.0 principles (for virtual painting training, for example).

“Our rail network is growing and I have been clear we will need thousands more people working in the sector in the years ahead,” said Chris Grayling. “I’m delighted to open Alstom’s top class new Rail Academy will help train up the next generation of talent. We are investing £13 billion in transport across the north and there are some great, rewarding careers working on our railways.”

Alstom has said the training academy will:

“Today we celebrate a fantastic new industrial facility for the UK, and even more importantly, our first intake of new apprentices,” added Nick Crossfield, Managing Director at Alstom UK & Ireland. “In year one the Alstom Academy for Rail will train 20 apprentices, 5 of whom have been taken on to help repaint the iconic Pendolino trains right here in Widnes.

“It is a particularly proud moment for us to welcome the Secretary of State to see our progress on that project, because it demonstrates how transport contracts can deliver real jobs and training on the ground. Not just creating a better railway, but also building a new generation of highly skilled railway engineers.”

Thousands of extra rail apprentices will be needed in the coming years as the network grows, with the government investing £1 billion in the Great North Rail Project up until 2020.