BLS is to purchase 52 latest-generation Flirt trains after the contract was signed by Peter Spuhler, President of the Board of Directors of Stadler and BLS CEO Bernard Guillelmon… 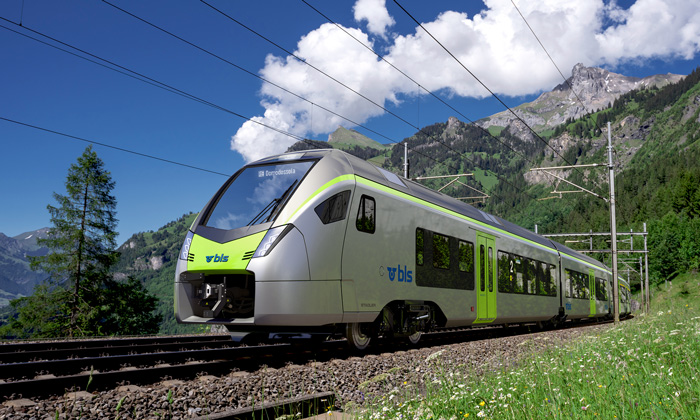 The 52 Flirt trains from Stadler will replace three older train models, enabling BLS to push ahead with the planned expansion of regional transport in the Berne area.

The Confederation, the cantons and the Board of Directors of BLS have approved the necessary resources for the purchase. The latest-generation Flirt trains for BLS will follow on from the previous MUTZ double-decker multiple units.

“We are particularly pleased to be able to deliver Swiss trains from Thurgau to BLS for this contract,” said Peter Spuhler, President of the Board of Directors of Stadler, who described the new train as particularly lightweight and energy saving with extra comfort and security for passengers.

BLS will use the 52 new trains to harmonise its fleet and operations, planning and maintenance will be simplified as a result. In addition, BLS can now proceed with the planned expansion of regional transport in the canton of Bern. It is planned to run trains at 15-minute intervals in the main perimeter of the Bern commuter rail network alongside 28 trains that will be put into service on various commuter rail routes.

BLS is initially only ordering 24 trains rather than 30 for regional express traffic because the Bern-Neuchâtel-La Chaux-de-Fonds line will no longer form part of its regional network in the future. However to guarantee the uniformity of the fleet in the long term, BLS is taking out an option for a possible further order.

“We were convinced by Stadler’s offer for the largest train acquisition in the history of BLS,” said BLS CEO, Bernard Guillelmon. “We look forward to offering our passengers an even more comfortable and reliable means of transport to their destinations in the future.”

From mid-2018 Stadler will create a full-scale model – or maquette – in its Bussnang factory. BLS and Stadler will confirm the design of the new trains on the basis of this maquette. The model will help make decisions such as the fittings in the boarding areas, the type and upholstery of the seats and the size of the tables. To take the needs of passengers into account as much as possible, BLS is involving various customer representatives in the process, such as Pro Bahn, selected passengers and organisations for travellers with reduced mobility.

Stadler is expected to start building the first railcar bodies in early 2019 and the first trains should be ready to be tested on track by mid-2019. BLS will put the trains into operation gradually between 2021 and 2025.