A new railway route has been proposed by London firm Expedition, creating a high-speed railway version of the M25, connecting both Gatwick and Heathrow airports… 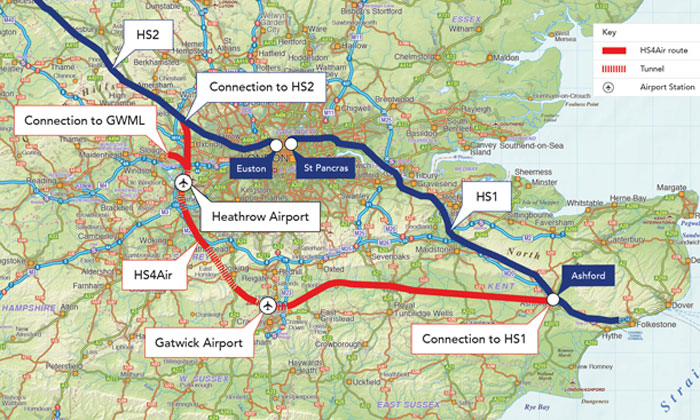 Expedition, a London-based engineering consultancy firm, have revealed their proposal for a new high-speed railway called HS4Air (High-Speed for Air).

The new railway would connect the existing HS1 with the planned HS2, linking both Gatwick and Heathrow airports. Also included would be a connection to the Great Western Main Line railway (GWML).

Along this planned route, passengers would be able to travel to either airport from cities such as Birmingham, Manchester, Leeds and Cardiff without the need to change trains; reducing road congestion, air pollution and travel times. Journey duration from Sussex and Kent to the Midlands and the West would also be reduced by up to one hour.

Moreover, HS4Air would bring direct international train services, from the Midlands and the North to Europe via the Channel Tunnel. The high-speed rail service to the city centre of Paris, from both Birmingham and Manchester, would be faster in comparison to flying.

Director of Expedition, Alistair Lenczner, Leader of the HS4Air proposal, said: “HS4Air has been developed to allow rail and aviation infrastructure projects in South East England that are currently unconnected to become joined-up. This will offer greatly enhanced benefits for users and provide better value for the investments currently being made in the UK’s strategic infrastructure.” 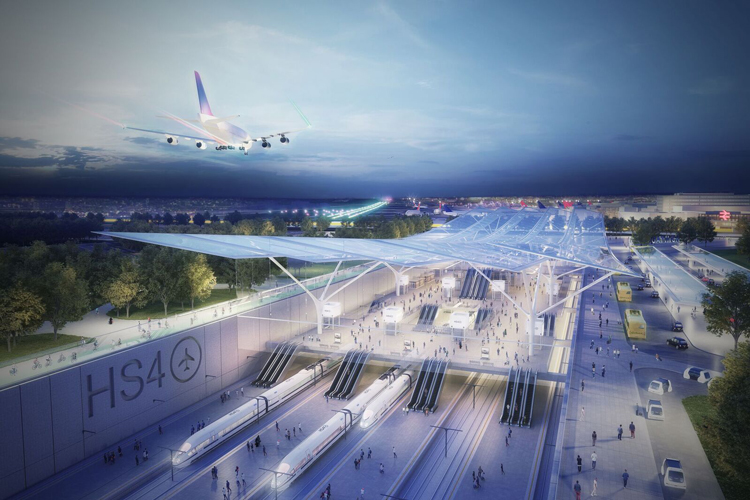 With HS4Air, South East England’s transport network would become more environmentally-friendly with reduced carbon emissions and less air pollution. The region would experience stimulated economic growth across the nation as a result from the stronger transport links between cities. The nation’s distribution networks could also benefit from HS4Air by running cables and pipes alongside the railway.

“In a way HS4Air can be regarded as a high-speed railway version of the M25 around London, except that it allows much faster journey times with no congestion and with far less impact on the environment,” continued Alistair.

The proposal illustrates the route to be approximately 140km-long between the connections with HS1 at Ashford and HS2 near Denham. Twenty per cent of the line would be tunnelled to avoid impacting the landscape and 40 per cent would re-use the existing straight railway running between Tonbridge and Ashford which would require simple upgrading to operate high-speed trains.

“The proposed HS4Air project is an example of integrated strategic planning that spans across multiple infrastructure sectors that are too often planned within separate ‘silos’,” said Alistair. “Such integrated planning allows projects to achieve better results in terms of their land-use efficiency and investment value.”

Using the cost estimates from HS2 Phase 1, HS4Air has been estimated to cost approximately £10 billion and is expected to provide a similar transport network integration that already exists in France, Germany, the Netherlands, Belgium and Switzerland.