The projects included in IA’s 2019 Infrastructure Priority List are important nation-building initiatives and are endorsed by the rail sector. 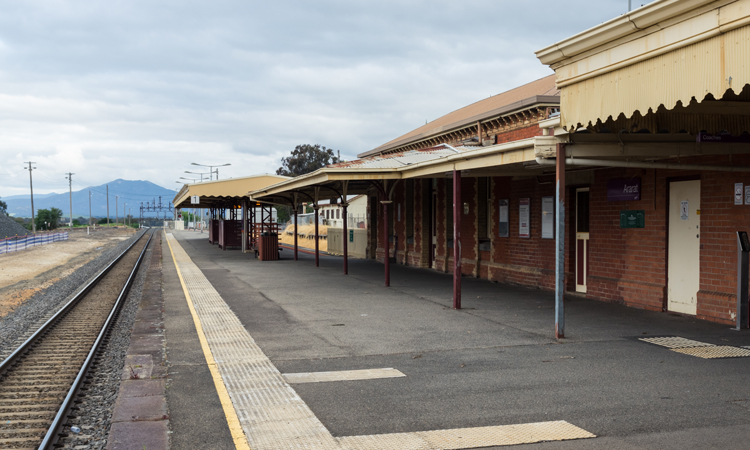 The Ballarat Line, which passes through Ararat station (pictured) has been named a priority project in need of upgrading

The Infrastructure Priority List is the authoritative list of nationally-significant infrastructure investments that Australia needs over the next 15 years.

“We know that rail is an efficient, environmentally and socially beneficial mode of transport. We also know that rail has lower emissions than road transport, is safer and can help reduce congestion in cities.

“The significance of these rail projects identified by IA warrants investment from governments at all levels. Our networks of infrastructure and services connect people and communities, support freight transport across the country, help deliver our resources to overseas markets and continue to generate economic growth and employment.

“The latest update to the Infrastructure Priority List highlights a number of projects have been positively assessed, including METRONET: Yanchep Rail Extension which has been identified as a high-priority project.

“The Ballarat Line Upgrade, METRONET: Thornlie-Cockburn Link and the Gawler Rail Line Electrification and Modernisation project have also been positively assessed as Priority Projects in light of the significant opportunities they will bring to our nation.

“A high-priority initiative of particular note is the Network Optimisation Program – Rail. This involves a programme of work focused on addressing capacity constraints and improving service levels on existing urban and regional passenger and freight networks.

“I’d like to reiterate the key point that maximising the economic benefits of the projects and initiatives contained in the Infrastructure Priority List relies heavily on Australia having the skilled labour available to construct, operate and maintain them. In 2018 ARA produced a report that predicted skilled labour shortages would inhibit our ability to deliver projects on budget and on time, unless urgent action was undertaken to address them,” Danny concluded.