DART has awarded Stadler the contract for eight FLIRT for Texas

The contract, which is thought to cost in excess of US$119 million, will see trains equipped with 240 seats and space for 225 standing passengers. 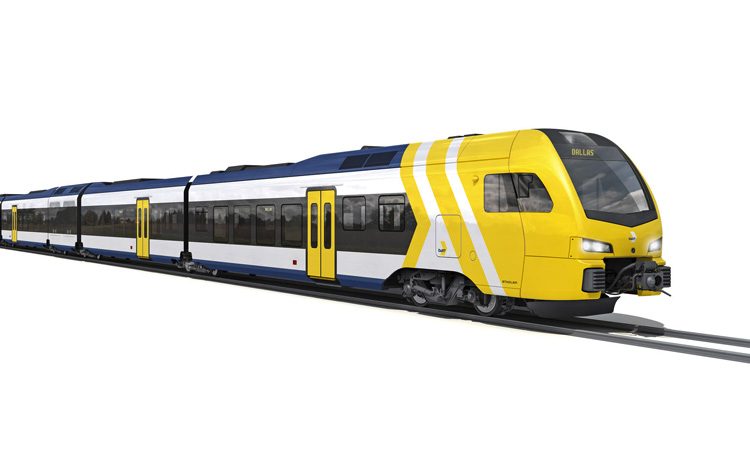 The Dallas Area Rapid Transit (DART) has awarded Stadler the contract to assemble and build eight FLIRT and for the design of an Equipment Maintenance Facility (EMF) for the Cotton Belt Regional Rail Project.

The contract for the diesel multiple unit trains is valued at approximately US$119 million. According to the contract DART anticipate the trains to go into passenger service by the end of 2022.

The new vehicles Stadler is designing for DART have the ability to transport 240 seated passengers and 225 standing passengers and are fully compliant with the Americans with Disabilities Act (ADA). To ensure safety for all guests, Stadler plans to install a comprehensive CCTV system on each train.

In addition, the trains are to be equipped with an automatic passenger counting system, which can count the number of passengers boarding and alighting the train at each stop, can detect huddling of passengers in certain areas of the train as well as blockages of boarding areas.

The FLIRT for DART is self-propelled by a diesel multiple unit (DMU) and meets both tier four EPA emissions standards and FRA Standards. Each train set consists of four units, plus a power pack in the middle, which houses the power unit. This setup includes four powered axles and eight unpowered axles which puts the trains at approximately 267 feet long.

According to the contract, Stadler will provide input and past experiences to engineering company Urban Engineers, who is contracted for their design services for the planned EMF. This is the fourth contract for Stadler in Texas so far.

Operators such as CapMetro in Austin, Denton County Transportation Authority in Lewisville and TEXRail in Fort Worth are already successfully in revenue service with Stadler trains.

Martin Ritter, CEO of Stadler US Inc., said: “Stadler is honoured to now also supply DART with new state-of-the-art trains. We are proud that DART has chosen our FLIRT and know that we will be able to deliver a product that satisfies the customer to the highest degree.

John Rhone, DART VP of Capital Design and Construction, said: “It’s been a pleasure working with Stadler US, Inc. on the design and specifications of our new Cotton Belt Regional Rail Project trains. Their focus on technology innovation and design promises to provide our customers with the safe and enjoyable ride they’ve come to expect from DART.”