Due to railway metal theft costing £1.4 million in UK taxpayer-money over the last 12 months, Network Rail and the British Transport Police are taking action to tackle stolen metal trading. 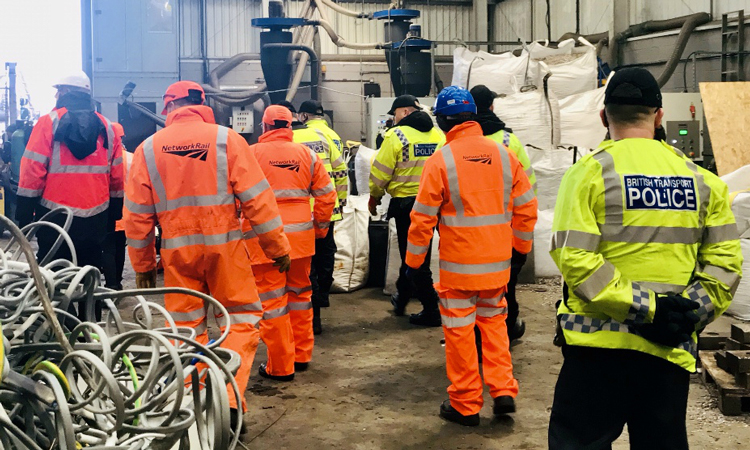 Network Rail and the British Transport Police (BTP) have begun visiting scrap yards in Greater Manchester as a part of efforts to tackle the trading of stolen metal following recent figures revealing that over 400 incidents of metal theft on the railway between London Euston and Carlisle have occurred in the last 12 months.

The result of metal theft on Britain’s railways include significant delays to passengers and costing the UK taxpayer an estimated £1.4 million in Network Rail’s North West & Central Region.

The efforts to discourage metal theft and stolen metal trading include surprise scrap dealer site visits, including reminding traders of their obligations under the Scrap Metal Dealers Act 2013.

Project Manager for Route Crime Performance Initiatives at Network Rail, Andrea Graham, said: “Metal theft not only makes it harder to maintain our railway, but causes significant problems for passengers too. To stop the trade of illegal scrap metal, dealers must be vigilant if offered materials which could have been illegally obtained. Trespassing on the railway is incredibly dangerous, as well as illegal. Thieves are not just risking a criminal record when they come onto the railway to commit crimes, but risking their lives too.”

UK law dictates that dealers must ensure traded metal is legally sourced and that sellers’ details are recorded and kept as part of any sale. Despite this, organised criminal gangs are increasingly targeting metal used in rail infrastructure and exploiting high metal prices. Thieves are being warned that the police are introducing new means of catching offenders, such as metal marked with a variety of trackable tags.

Chief Inspector Gary Jones said: “British Transport Police officers regularly work with industry partners, particularly Network Rail, to catch out and target metal thieves, which includes paying surprise visits to scrap metal yards, as well as patrols and covert and overt operations. Our aim is to disrupt this criminal activity by targeting strategic points across the country. Anyone involved in the theft and trade of metal from the railway will be brought to justice. Cable theft on the rail system involves not only huge financial losses, but causes hours of delays to millions of passengers. It is not a victimless crime. It is also extremely dangerous for those involved who put themselves at risk of serious injury and death by trespassing on lines.”