Following the introduction of free water fountains at UK stations, Network Rail has saved the equivalent of three million plastic bottles from landfill. 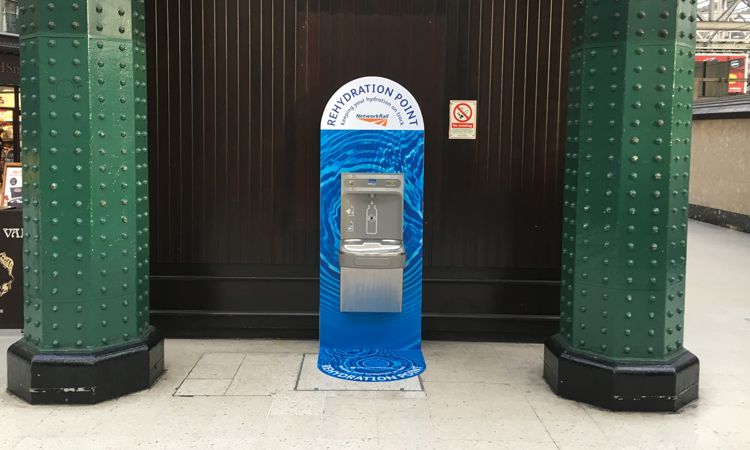 Following the launch of the campaign in 2018, Network Rail’s free water fountain initiative has led to passengers travelling through the UK’s biggest and busiest stations helping to save the equivalent of three million plastic bottles* from being sent to landfill.

The initiative has proved increasingly popular with passengers – during 2019’s National Refill Day, an initiative led by City to Sea, Network Rail announced that the equivalent of one million plastic bottles had been saved. Therefore, the company subsequently set a target of reaching two million by the end of 2020.

Since setting that target on 19 June 2019, Network Rail has significantly surpassed two million and successfully accommodated the avoided waste of three million plastic bottles by encouraging the switch to reuseable bottles.

Managing Director of Property at Network Rail, David Biggs, said: “Network Rail has a big role to play in tackling plastic pollution. We know that passengers share our passion for reducing single-use plastics, so it’s important that we make it as easy as possible for them to refill throughout their journey. It’s great that we now have free water fountains in all of our managed stations and, even more so, that they’re making a real difference for passengers.”

The success coincides with Leeds Station, the final major station on the network, installing its water fountain during January 2020 as part of wider refurbishment works currently being undertaken at the station. Free water fountains can now be found at all 20 of Network Rail’s managed stations, including London Waterloo, Birmingham New Street and London King’s Cross.

With the introduction of free water fountains across the UK, passengers are being encouraged to download City to Sea’s ‘Refill App’, which connects users to almost 30,000 refill stations nationwide and helps them to reduce their use of single-use plastics whilst on the move.

Steve Hynd, Campaigns Manager at City to Sea, said: “It’s fantastic to have the support of Network Rail and, through our partnership with them, we are empowering passengers to avoid single-use plastic. We know that when people are on the go, this is the time they’re most likely to buy a plastic bottle of water. Research shows 36 per cent of people who regularly carry a reusable water bottle say they would buy a plastic bottle at a train station. We are here to offer them an easy, cheap and good for the environment alternative. Now that’s something to raise a glass to.”

The UK’s Transport Secretary, Grant Shapps, hailed the initiative, saying: “Network Rail and City to Sea’s campaign has been a massive success, ensuring passengers stay hydrated, save money and we all save the planet one water bottle at a time. People across the country start and finish their days on our railways and encouraging water refills both avoids waste and means that, as a nation, we won’t be running on empty.”

Network Rail to optimise rail network through collaboration with EIC