Finding the right formula for bogies and wheelsets: 12 months on

Neil Dinmore, Principal Engineer of Structures and Material at the Rail Safety and Standards Board (RSSB), outlines how RSSB is continuing to support innovative solutions to improve the lifecycles of bogies and wheelsets, funded by the UK’s Department for Transport (DfT). 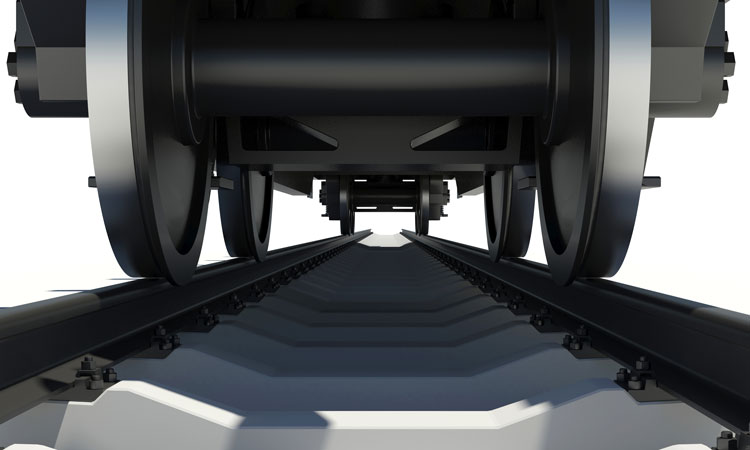 Following the Vehicle Dynamics Competition in 2016, a £4.5 million competition was launched by RSSB to find innovations to reduce damage to tracks by rail vehicles – three projects were chosen to develop improvements to rail vehicles. Despite the coronavirus pandemic affecting initial timelines, the projects have made progress over the last 12 months.

The carbon fibre bogie project makes use of recycled carbon fibre material (pioneered by ELG Carbon Fibre) to provide a lightweight replacement bogie frame for a passenger vehicle, fully compliant with the relevant structural, dynamic and fire safety standards. The bogie is around 35 per cent lighter than the steel bogie it replaces, and the manufacturing process facilitates the design of a structurally efficient frame.

The finished bogie incorporates many of the components from existing bogies, such as axleboxes and suspension elements, provided by Alstom. Without many of these components, the weight savings could be far more significant, as the frame itself is more than 60 per cent lighter than the steel version. Integrating the existing metal components with the carbon fibre structure was a major challenge; however, Magma Structures had experience of similar connections from their work in the marine industry.

Currently at the University of Huddersfield, the prototype bogie is undergoing laboratory testing. The team have provided a more detailed update, including descriptions of the fibre-optic strain gauging, which has also been used in the marine industry for real-time monitoring of structural integrity. The prototype was manufactured using the manual lay-up of the composite material; however, this is a labour-intensive process. Developments are underway to increase process automation in order to provide time and cost savings in production. The consortium is looking to manufacture at least two more bogies to use for on-track testing in the future.

An inerter is the mechanical analogue of an electrical capacitor; it produces a force which is proportional to the relative acceleration between its ends. Inerters were pioneered by the University of Cambridge in 2002 and have been used to improve tyre contact in Formula One racing (known as the J-damper). The component itself is the size of a typical hydraulic damper, weighing no more than a few kilograms, but with over a tonne of effective inertia, termed ‘inertance’.

A team at the University of Bristol and the University of Huddersfield undertook extensive theoretical studies using the multi-body dynamics simulation tool, Vampire®. These studies were used to demonstrate the potential use of inerters to reduce track access charges by allowing for reductions in the vehicle’s Primary Yaw Stiffness (PYS). Key acceptance criteria for the theoretical studies’ findings was that reducing PYS would not adversely affect ride or safety, i.e. that any bogie modified to incorporate inerters would maintain compliance to the relevant standards and performance criteria.

Inerters can have multiple physical constructs, including a mechanical ball-screw or a hydraulic device employing orifice damping, which gives a variety of options for integration. Prototype devices exploring the space envelope constraints and the bogie suspension characteristics are currently under development.

Once the prototypes are available, laboratory testing will be required to validate the theoretical results. Discussions are underway regarding such testing, with the recognition that on-track testing will be needed to fully demonstrate the effectiveness and performance of the inerters. A key challenge is that the effects are more notable, and therefore easier to measure, at higher speeds, which will restrict where the testing can take place.

The Liebherr ARSS uses electro-hydraulic actuators, originally developed for aerospace applications, to actively steer wheelsets on rail vehicle bogies in response to track curvature. A few millimetres of longitudinal displacement at one end of the axle are enough to more closely align the axle with most curve radii; this alignment has the effect of reducing the forces in the wheel-rail contact patch. As with inerters, the system has the potential to reduce damage and wear at the interface. This can reduce costs for train operators by lowering the variable usage charge paid to run trains on UK rail infrastructure. There are also likely to be benefits for wheel maintenance.

The system has been thoroughly modelled to prove the concept, and RSSB has witnessed the operation of a prototype in a laboratory environment. Preparations are underway for track testing on a private railway in the UK. This was due to take place earlier in 2020, but has unfortunately been postponed due to the coronavirus pandemic. The preparatory work included adapting an existing bogie to accommodate the curve sensing equipment and the actuators, which sit in place of radial arm bushes. The system is tuned to ensure that it responds to the larger wavelength track (design) curvature, rather than short wavelength (irregularities) curvature. The modifications have been designed to meet the relevant standards and the associated analyses and approvals. The physical modifications are now complete, and assembly of the trial bogie will begin in summer 2020. The trial bogie will be fitted to a test vehicle with an unmodified bogie at the other end. Both bogies will be instrumented so that their performance can be directly compared.

At present, the plan is to complete the testing by late summer to early autumn 2020. The test results will then be analysed and evaluated, and the resulting report will be used to support the case for developing the design towards testing on the main line.

In summary, all three projects focus on retrofitting modifications to existing bogie designs and are showing very encouraging evidence of their ability to reduce track damage. Once the concepts are proven, they will be open for better exploitation by incorporation in new bogie designs.

Neil Dinmore has over 25 years of experience in rail vehicle mechanical engineering. He joined British Rail as a graduate, working subsequently for Atkins and Interfleet (SNC-Lavalin) before joining RSSB in 2018. He represents the UK on European Standards Committees (vehicle structures and fire), develops UK railway standards and provides technical support to innovation projects.