Peter Blaine and Pieter Conradie from the University of Stellenbosch look at the tools and methods available to remove components from the armature shafts or traction motors of motor coaches of the Passenger Rail Agency of South Africa (PRASA).

The Passenger Rail Agency of South Africa (PRASA) is a state operated enterprise mandated to provide passenger rail services throughout South Africa. They have 2,228km of track, 1,311 motor coaches and 3,424 coaches at their disposal. Most of the motor coaches use the 5M series traction motors. These must be serviced either at specified intervals or when there is a motor breakdown. During these events, the armature shaft bearings are most often replaced. Despite a work instruction specifying the use of induction heaters to release the interference fit with which the bearings were initially restored, the procedure is not followed because it was never seen as a viable alternative due to the volume of bearing races being dismounted on a daily basis. The artisans involved claimed that they had not been supplied with the induction heaters and so had fallen back on the old method of heating the bearings using oxyacetylene as shown in Figure 1. The bearings were then prised off the shaft using crowbars. The present process requires the work of three people. During conversations with PRASA management, the process of removing the bearings was identified as a serious problem during the overall procedure.

The method is unacceptable for several reasons, including:

Mainly to counter these reasons, a bearing puller system was considered the most appropriate. PRASA required that one tool be designed to remove bearings on both ends of the shaft.

The design of the classic three jaw bearing puller is well known, but not considered appropriate for this particular case because of the size of the bearings and the need to fix them firmly during the extraction process. They would need to be removed with the least damage to the armature shafts and with elimination, as far as possible, of danger to personnel. Therefore, the puller should enclose the bearing so that it is held correctly aligned to the shaft. The assembly is shown in Figure 2.

Figure 2: Half section of the bearing extractor tool [Page, 2019]

The Commutator End Collar is split into two halves so that it can be fitted over the bearing and the Puller Tube. It is held in position by the Retaining Ring. The Bush, originally specified as brass, was ultimately made of phosphor bronze and threaded with an ACME thread as was the Forcing Rod. The Forcing Rod had a conical assembly fitted to its working end fitted with a thrust bearing. At one stage the replacement of the Forcing Rod with an hydraulic cylinder was considered, and it might be advantageous to consider do so. It was decided to stay with the present design as it was considered more controllable and made the design modular and complete requiring no external pumps and hoses. 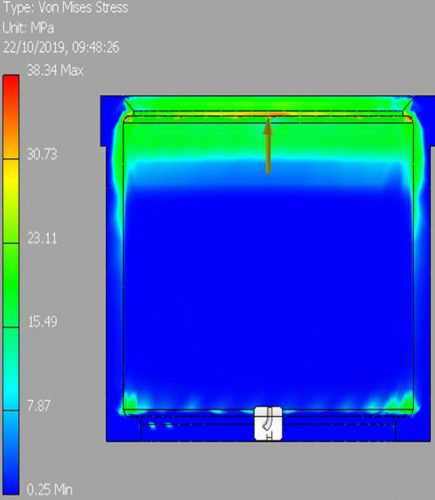 Initially it was planned to reintroduce induction heating of the bearings before removal. It was noticed that, if a tool could be designed which would remove the bearings without heating, the removal would be speeded up, no external power supply would be needed and a risk of injury to the workmen would be removed. The tool was designed with these considerations in mind. This required a full finite element analysis to identify weak areas in the tool. The results are shown in Figure 3.

The highest stress calculated was 38MPa which is well under then yield stress of common low carbon steels such as En8.

It was decided to test the design with and without oxyacetylene preheating the bearings as the latter would be the optimum solution. The tool was fitted to several bearings, starting with the smaller bearing. Strain gauges were fixed to the Puller Tube as this was common to both bearings which had different outer diameters so required different Commutator End Collars. The Retaining Ring was then fitted, and the strain gauge system connected to data capture apparatus. The Forcing Rod was turned using a spanner until the bearing was dismounted from the shaft. The torque applied by the spanner to the Forcing Rod was measured so that the transmitted force could be calculated. After the process had been repeated on a number of the smaller bearings successfully, the test was repeated on the larger bearing.

The tool worked successfully for the smaller bearing even when the bearing was not heated. In the case of the larger bearing, the Forcing Rod thrust bearing failed under load, so no valid result was obtained. This called for a redesign of the thrust bearing assembly, which has been done. However, there has been no testing recorded mainly due to the shutdown legislated to combat the COVID-19 virus outbreak.

The design showed great promise for a much safer procedure for removing armature shaft bearings without the use of preheating. The result was a safer and faster process requiring no outside resource supply such as electrical power or heat.

Video: The maintenance you need to keep rail vehicles rolling