Despite underinvestment in Turkey’s rail development in the past, Kamuran Yazıcı, Director General and Chairman of the Board of TCDD Taşımacılık A.Ş, explains that there is now a focus on transforming high-speed rail in the country, with the goal of constructing an additional 5,500km of high-speed and rapid rail lines by 2023. 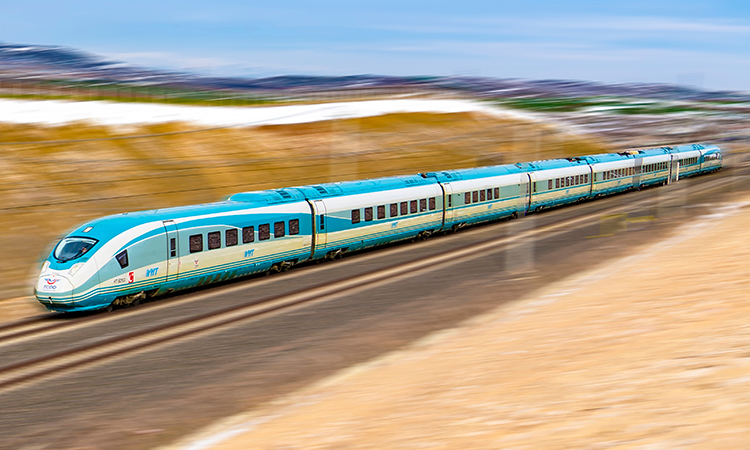 Since 1 January 2017, TCDD Taşımacılık A.Ş. – a government-owned train operator – has been responsible for most passenger and rail freight activity in Turkey, operating on the country’s railway network; the total length of which is 12,803km and consists of 1,213km of high-speed railway lines and 11,590km of conventional rail lines.

With the opening of the entire route of Marmaray – which forms a seamless railway line between Europe and Asia – on 12 March 2019, high-speed trains now connect with Europe, making it possible to reach Halkalı from Konya in five hours 41 minutes and Halkalı from Ankara in five hours. 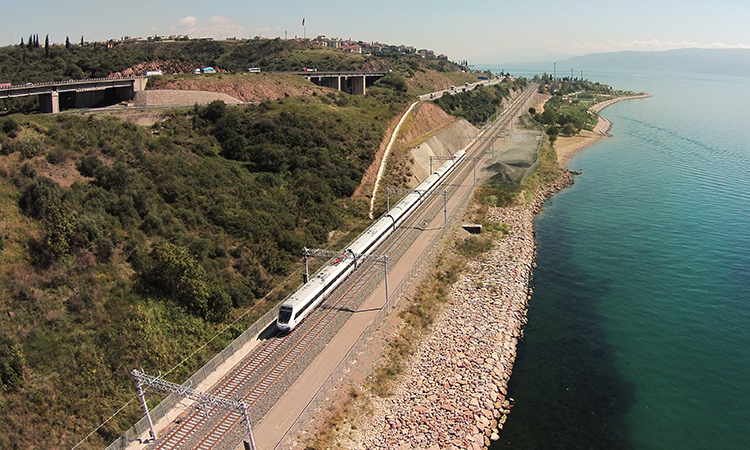 On the Ankara–Istanbul line, which is one of the most important passenger transport routes in our country, the daily ridership on YHTs reached 9,500 and the share of the railway increased from 10 per cent to 15 per cent.

Finally, the Konya–Istanbul high-speed line serves 3,500 passengers per day, and its share in railway transportation increased from five per cent to 17 per cent.

With the introduction of high-speed trains in our country, both transportation habits and transportation purposes are changing and diversifying. Circulation between cities, especially due to tourism, is increasing significantly. Additionally, high-speed railway lines play an important role as an element when people are making decisions about education, work and so on. People choose commuting every day instead of moving to another city because of work, education etc. Thanks to high-speed trains significantly decreasing city-to-city travel times, the number of people travelling on a daily basis is increasing, the number of tourists using high-speed trains have increased significantly – rising from 15 per cent to 40 per cent – and even the younger generations who did not like to travel by train before high-speed services were introduced are also discovering fast trains and now choose it for their travels.

After tourism-related travel, 33.3 per cent of high-speed rail journeys belong to commuters and 22.3 per cent belong to people traveling for educational purposes.

Face-to-face satisfaction surveys are conducted twice a year, with the average figure not falling below 90 per cent.

When the demographics of high-speed railway passengers are analysed, it was found that 30 per cent of them are students, 20 per cent are civil servants and 69 per cent are 37 years old or younger.

Environmentally-friendly and beneficial to the economy

As a result of the significant decrease in the number of cars and buses used because of people choosing to travel on electric-powered high-speed railway lines, Turkey’s fuel expenditures have reduced. In addition, environmentally-friendly railways help to reduce carbon dioxide emissions and protect the environment.

Furthermore, the implementation of rapid and high-speed railway line projects due to the policies with railway investment priority in Turkey contributes not only to the development of railway technologies, but also an increase in employment rates. Since 2003, qualified human resource required by the sector is satisfied through departments opened in secondary schools and universities in Turkey.

In Turkey – ranking as the eighth country in commissioning high-speed railway operations in the world and the sixth in Europe – engineering and technological know-how has been improving and local companies have been implementing extremely successful projects in advanced railway investments.

Furthermore, the introduction of high-speed railway technology in Turkey has given impetus to the endeavours for the development of an advanced railway industry and the creation of a domestic and national railway industry. Turkey, which depended on the foreign railway industry prior to 2003, is now in a position where it can provide for its own needs and is also an exporting country through the investments made.

Thanks to the efforts to create a domestic and national railway industry, the works for a container freight wagon to be designed and manufactured solely in Turkey and for the manufacture of a national electric trainset capable of a speed of 160km/h is in progress, as well. The ‘National Electric Trainset’ will be put into service following the completion of the required tests, which will continue until the end of 2020. Additionally, it is planned to put a National Electric Trainset capable of reaching a speed of 225km/h on tracks in 2021 as well.

With these developments and more, service quality is continuously improving to ensure the best service of the existing high-speed railway lines.

In this context, high-speed train travel cards (‘YHT Seyahat Kartları’) are offered as an alternative for passengers who use YHTs regularly and the ‘Turuncu Masa (Orange Table) App’ is offered to disabled passengers and persons in need of assistance during getting on and off trains.

Thanks to the E-ticket App, developed for the facilitation of access to tickets, 72 per cent of YHT tickets are purchased via the internet without using ticket offices. In addition, it is possible to find information and purchase tickets via the Call Centre that was established to communicate with passengers.

Besides, passengers can be reached promptly through social media; the operation and media centre considers SMS messages, pictures or videos sent by passengers immediately and provides feedback within five to 15 minutes.

Furthermore, a comfortable and peaceful journey is ensured by high-speed trains, and the on-board YHT Entertainment System allows passengers to enjoy themselves. Passengers can access various types of Turkish or foreign movies and documentaries etc. with their own computer or mobile device, and visually impaired passengers are offered audiobook content. 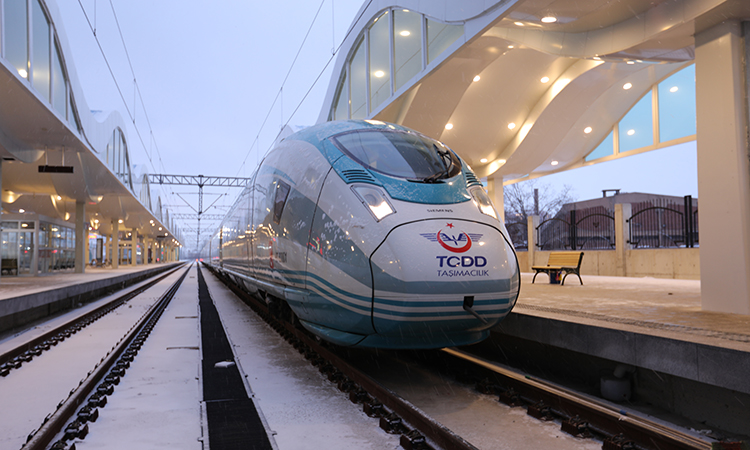 Rolling stock and expansion of lines

As the Directorate General of TCDD Taşımacılık A.Ş., we are continuing to procure modern high‑speed trainsets, too. We are planning to put 12 YHT trainsets (which have already been ordered) into operation during 2020 following their acceptance and the completion of the required tests. Thus, we are aiming to increase the current YHT ridership per day from 23,000 to 30,000, and to 40,000 by 2023.

By transporting approximately 14 million passengers by high‑speed/rapid trains on the lines of Ankara‑Sivas, Konya‑Karaman, Ankara‑İzmir and Bursa–Bilecik (to be commissioned by 2023), 57 per cent of our population will make use of YHTs”

By 2023, we are aiming to reach a 17,500km‑long railway network – through constructing 5,500km of high-speed and rapid railway lines – to increase the share of railways to 3.8 per cent for passenger transportation and to 10 per cent for freight transportation. By transporting approximately 14 million passengers by high‑speed/rapid trains on the lines of Ankara‑Sivas, Konya‑Karaman, Ankara‑İzmir and Bursa–Bilecik (to be commissioned by 2023), 57 per cent of our population will make use of YHTs.

Expanding high-speed and rapid railway networks – which are environmentally friendly, with low-cost construction and an extended lifetime – in Turkey from Edirne to Kars, from Trabzon to Antalya, will continue to positively affect various economic and social fields – from traffic to energy conservation, from protection of the environment to the elimination of regional differences.

Moreover, the railway sector significantly contributes to the strength of Turkey and the development of the railway sector between the countries in the region. Expanding the rapid railway lines to allow freight transportation, the Baku–Tiflis–Kars railway line and its integration with Trans-Caspian International Transport Route, which BTK is involved, has increased the importance of the shortest, most affordable and favourable railway corridor from China to Europe, which is named the ‘Middle Corridor’.

The commissioning of rapid railway lines on the Kars–Edirne axis in Turkey provides, on one hand, a significant amount of time savings in transportation between China to Europe through the Marmaray, offering a seamless railway connection and makes, on the other hand, the Middle Corridor even more advantageous. The works for passenger transportation on this corridor is also in progress.

Turkey is gradually raising its goals for railway transportation, which is regarded as the transportation system of the 21st century, and considers railways as the backbone of our transport system in making Turkey a logistics base

Kamuran Yazıcı graduated from the Civil Engineering Department of the Faculty of Engineering and Architecture of Karadeniz Technical University in 1988 and completed his master’s degree at the Graduate Institute of Natural and Applied Sciences at the same university in 1991. He started working at the Directorate General of Highways in 1991 and served in many positions, such as Chief Engineer, Deputy Regional Director and Head of Department. He worked as the Deputy Director General of Highways between 2017 and 2019 and was appointed as Director General and Chairman of the Board of TCDD Taşımacılık A.Ş. in September 2019, pursuant to the Presidential Decision No. 2019/329. 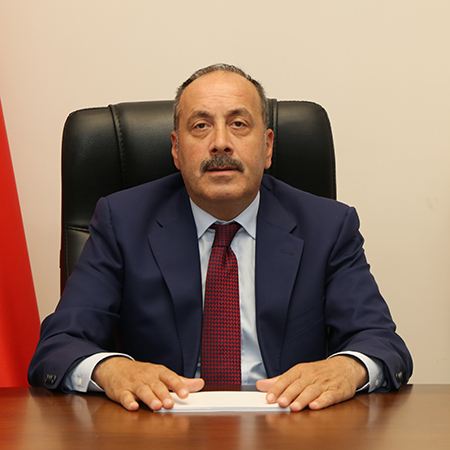