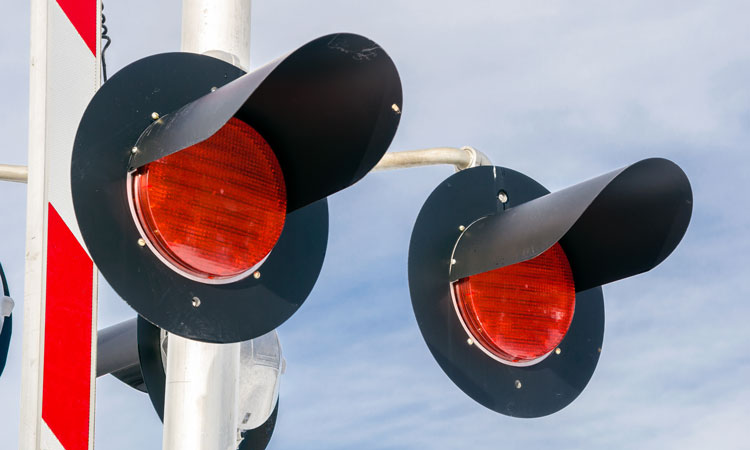 The emergence of new technologies and connected infrastructures and vehicles in recent years offers a new opportunity to increase safety at level crossings, which is a main priority for railways around the world.

DIGIM II – a new Proof of Concept (POC) – has been designed and evaluated for connecting level crossings to their surroundings to solve the problem of level crossing violation.

The aim of DIGIM II is to improve safety and efficiency at level crossings. In this POC, level crossings will be connected to cars to alert and warn them regarding the status of an approaching level crossing. If no action or insufficient action is taken by the driver, the car will take control by slowing down and stopping safely before the barrier.

The project will run in two phases. In the first phase, in partnership with DASSAULT SYSTÈMES, UIC showcased how the ‘3DEXPERIENCE® Platform’ could be used to develop and simulate an example of a conceptual architecture of a ‘Connected Level Crossing’. The aim of this first step was to show that several simulation technologies could be connected together within the same digital platform – the 3DEXPERIENCE® Platform – to define, study and simulate a complex system that connects a level crossing with an automobile.

In the second phase of the project, in partnership with an industrial organisation (either an automotive OEM or an automotive supplier), a real system could be designed, developed, simulated and then tested in a realenvironment.

Members of the project

The main technical function of the proposed system is responsible for activating the automatic braking system of the car in the event of a risk of collision with the level crossing and stopping the car safely before the level crossing area. In a normal situation, the system operates in three stages:

Step 1
The system informs the car of the level crossing status, i.e. open, closed or out of service.

Step 2
If the calculations show that there is a risk of a level crossing violation, taking into account the real speed of the vehicle, it issues an alert to the car driver.

Step 3
If the driver does not react or if their action is deemed insufficient, the system takes over and slows down the car and stops it before the entry barrier (see Figure 1).

The main proposed use case of the new Advanced Driver-Assistance Systems (ADAS) is to prevent cars from passing the crossing barrier illegally when it is closed.

The system may be used in other cases in the future; for example, to inform the approaching train of an obstacle in the crossing area and to signal an emergency. It can also be used in combination with certain information systems. However, it is essential to analyse the potential effects of the system on car drivers from a safety perspective. In general, such a POC could be used in the context of autonomous vehicles.

The POC design and simulation process

To design the POC, the UIC and the members of the project defined the general requirements. The requirements have been simulated using STIMULUS software, to detect ambiguous, incorrect, missing or conflicting requirements before designing begins. Then, in cooperation with DASSAULT SYSTÈMES, we showcased how the 3DEXPERIENCE® platform – which delivers innovative applications that support end-to-end digital continuity between the multiple disciplines involved in conceptual design – could be used to design a proposition of a conceptual architecture. Once the designing phase was over, a scenario was defined to evaluate the POC. DASSAULT SYSTÈMES simulated the concept and the scenarios using the 3DEXPERIENCE® platform software. The POC was evaluated based on the result of the simulation.

The results of the first phase

At the end of the first phase of DIGIM II, an example of a simplified conceptual architecture of an ADAS, which makes cars act more safely around level crossings, was designed and simulated using the ‘3DEXPERIENCE® Platform’.

In the next phase of DIGIM II, the project members have to identify an industrial partner, either an automotive OEM or an automotive supplier, to discuss the opportunity and the strategy to develop a new ADAS to improve safety and security at level crossings. It can be imagined having this system developed in several steps, starting, for example, via an information message, until the full control of the car by the ADAS, for the most secured advance systems.
Another axis would be to work with safety automotive and truck normalisation organisations to study the opportunity to create a new norm to increase the safety at level crossings, with new ADAS, for example.

Francis Bedel started his career at SNCF in 1982, filling roles such as traffic manager and manager of freight stations. In 1990, he joined SNCF’s IT Department to work on the rollout of a national project aiming to redesign the management of freight wagons and, from 1993 to 1997, was responsible for the operation of freight IT local bases. Between 2013 and 2016, Francis was RAILDATA President and, in 2015, took responsibility of the IT service of the UIC as Chief Digital Officer with the development of the UIC Digital Platform.

Parinaz Bazeghi has a master’s degree in Smart Mobility from Telecom & Ecole des Ponts Paris Tech, as well as a Master of Science in Railway Transportation Engineering from the Iran University of Science and Technology. Parinaz worked at the Iranian Railways (RAI) for Commuter Transportation and International Relations; in 2016, she got an award in the field of safety for the concept of ‘Rail defect diagnosis using smartphones and drones’. Parinaz then joined the UIC as Project Manager at the UIC Digital Platform. Among other duties, Parinaz has been coordinating the UIC DIGIM ‘DIgital IMpacts on business processes’ programme.