Jean-Marc Bedmar, Head of the Systems and Operations Department of RB Rail AS, details progress on the Rail Baltica transport corridor, and explains the challenges of implementing electrification on the largest Baltic‑region infrastructure project in the last 100 years. 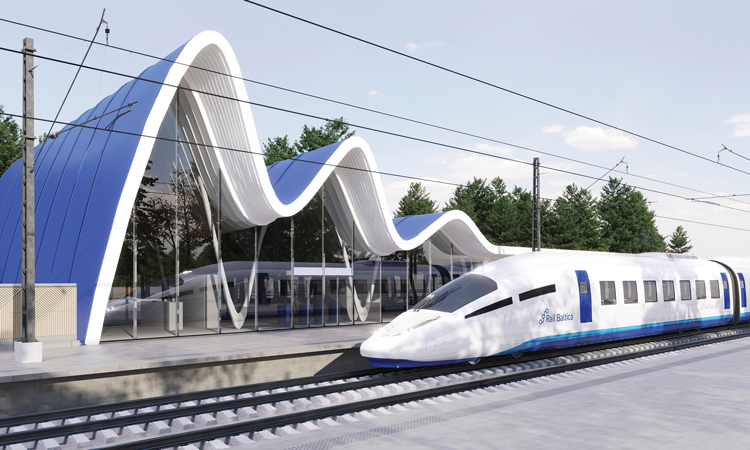 Rail Baltica is a greenfield rail transport infrastructure project in North-East Europe with the commitment to integrate the three Baltic States in the European rail network, linking Tallinn with Warsaw via Riga and Kaunas, plus a Kaunas–Vilnius branch, and ensuring the possibility of further development up to Finland. The project is financed by the EU’s Connecting Europe facility and the three Baltic states.

The train services to be operated on the line will combine high-speed passenger trains operated up to 250km/h, regional services and night trains up to 200km/h, while freight trains, mainly intermodal and containers trains, will operate at 120km/h.

For such a mainline corridor, traditional electrification using overhead catenary system (OCS) is a must – considering the range of power to be delivered. That said, numerous challenges need to be addressed: how to plan, design and deploy a modern electrification system on the longest one‑piece railway infrastructure ever built across the territory of three EU member states? How to take advantage of a unique greenfield project, to use the most state-of-the-art technologies, while keeping alive the long-term vision? And not to forget, how to maintain the ability to follow fast evolutions of the electricity sector in the Baltic states, and EU energy policies?

RB Rail AS, the joint venture of the Baltic states, in charge of implementing Rail Baltica as a cross-border project – including implementing the electrification (the so-called ENE subsystem) on the entire 870km line – has taken up the challenge since 2018. The first step was procuring a comprehensive analysis of the ENE subsystem implementation on the Rail Baltica corridor, which was awarded to the consortium Ineco-Ardanuy, consisting of Spanish companies Ingenería y Economía del Transporte S.M.E. M.P., S.A and ARDANUY Ingenería, S.A. The analysis evaluated and defined the main drivers, analysed the status and possible evolutions of electrical grids, the existing and future production capacities and their environmental impacts, as well as the applicable technologies. In addition, an ENE subsystem implementation plan and procurement strategy were also detailed.

With timely Rail Baltica stakeholders’ involvement being a key condition for successful delivery, an ad hoc technical working group was set up, associating ministries responsible for transport, energy and economy, entities in charge of Rail Baltica implementation, TSOs of the Baltic states, and the existing 1,520mm track gauge railway infrastructure managers in the Baltic states and railway infrastructure manager in Poland. It should be noted that the existing railway system in the Baltic States is dominated by a 1,520mm network; at the same time, difference in track gauges related to the ENE subsystem.

In April 2021, RB Rail AS, following a public procurement procedure, selected the consortium consisting of DB Engineering & Consulting GmbH (Germany), IDOM Consulting, Engineering, Architecture, S.A.U. (Spain) and ITALFERR S.p.A. (Italy) (the ENE Engineer), for the delivery of ENE Engineering services, covering the preparation of concept design of the electrification system, support for the procurement of design and build services for the entire Rail Baltica corridor, and supervision of construction and commissioning until the start of commercial operations.

As part of the concept design, the ENE engineer has already successfully performed several traction simulation iterations on the specifically created Rail Baltica electrification system model, by using a dedicated software tool. The software simulation approach was used as a comprehensive tool with the aim of comparing the different traction technologies, as well as optimising their configurations and ratings. The objective of this exercise was to ensure that power demand for railway operational needs (e.g. optimal feeding for the scheduled trains in nominal and degraded modes, reliability and availability levels, conformance to relevant standards as well as the best practices that proven technologies can bring) are identified, and action areas are identified to satisfy the demand by the public electricity networks at each Baltic state by complying to TSO requirements (i.e. absence or very restrictive requirements on impact to network stability and quality, technical conditions for connection, environmental impact etc.).

Additionally, the Baltic states are engaged in an ambitious project to synchronise with continental Europe country grids by 2025 and desynchronise their electrical grids from the BRELL1 energy ring.

By their nature, the railway electrical traction systems cause unbalance between the three phases of the electrical grids – which is strictly limited by the TSO regulations, a topic being solved thanks to a tight collaboration during the elaboration of the Concept design.

After compilation of all studies, parameters and requirements, the ENE engineer developed a sophisticated decision method, based on multicriteria analysis and economic analysis, with the target of determining the most technically economically optimum solution for the configuration of Rail Baltica energy subsystem. For the electrification system option analysis and ultimate decision, the following criteria were defined as main priorities: the best lifecycle cost for a duration of 50 years, maximisation of traction chain energy efficiency (from high voltage connections to wheels), and technology allowing flexibility to follow potential changes in type, and volume, of transport demand.

As a result of optimisation, the technology of Static Frequency Converters (SFC) was selected for traction sub-station configuration, associated with 2x25kV power distribution solution for feeding of railway OCS. SFC technology used for the railway traction combines the advantages of being fed from a three-phase network to deliver the power to a single-phase network by using dedicated power rectifiers and a single-phase converter. The traction chain AC-DC-AC allows the electrical quality decoupling of the railway traction system from existing electricity transmission grids, solving the unbalance issue, at the cost of an increased complexity. SFC technology also allows the control of transfers of energy between the electricity grids and railway traction system, in full reversibility modes.

A combination of SFC technology as a traction source and 2x25kV solution as traction distribution provides the possibility to increase the distance between traction substations, by optimising both cost of construction and cost of connections. Ultimately, energy efficiency is improved (compared to the traditional solutions), through better reuse of electricity regenerated by decelerating trains, which could be transferred to trains accelerating on a wider range.

Next stage: design and construction

Finally, the Rail Baltica electrification system will be designed and implemented as a single system in the three Baltic states. This also means the need to address the extra level of complexity stemming from border effects, and in Rail Baltica, there are three cross-border sections between Estonia, Latvia, Lithuania and Poland. Moreover, the size of the project itself is impressive: 870km overall length of double-track requires more than 2,000km of catenary system, ~4,350 tonnes of copper materials and ~50,000 masts. Electricity consumed by Rail Baltica will represent 900 GWh/year, leading to an estimated ~three per cent increase of the national consumptions in every Baltic state.

The procurement procedures for the following design and construction phase are under preparation and will be announced in the coming months, making the Rail Baltica design and build the largest electrification project as a single system to be deployed.

By taking decisive steps towards delivery of the Rail Baltica ENE subsystem, the Rail Baltica project and its energy sector partners are getting closer to delivery of an infrastructure fully fitted with state‑of‑art electric traction technology, highly efficient and with minimised environmental impact – paving the way to large-scale electrical transport operation by the end of the decade.

1. The BRELL energy ring is a synchronous mode of operation of the energy systems of Belarus, Russia, Estonia, Latvia, and Lithuania based on general principles of operation, exchange of electricity and support for each other by reserves in case of emergency situations

Since 2017, Jean-Marc Bedmar has been leading a team of experts from the Baltics and abroad responsible for the development of the Rail Baltica electrification and control-command and signalling systems, as well as the preparation of operation and maintenance phase. Before joining RB Rail AS, Jean-Marc gained extensive experience working as an engineer and project manager for high-speed railways and other public transport projects in more than 15 countries.