Andrea Giuricin, Transport Economist for University of Milan Bicocca, explores the development of open access competition in high-speed rail throughout Europe and how it has impacted the market. 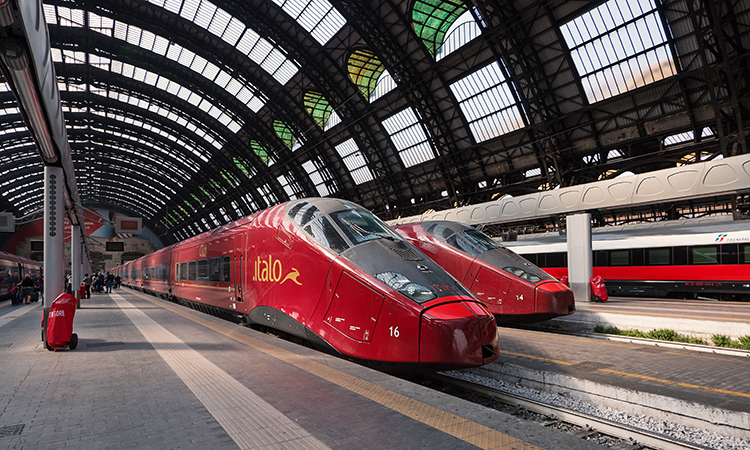 While in 2021 Italy was the first country to introduce the open access competition in high-speed rail, the past year has seen more countries become open to the competition. 2021 became the year of the development of liberalisation in high-speed rail, it was requested by the European Commission (EC) thanks to the Fourth Railway Package, because the most important markets were opened. Spain and France are the most interesting cases, because in these two countries the consumers finally had the possibility to choose the operator in some of the main important routes. It is important to underline that we are just at the beginning of this process, even if the impact of COVID-19 has slowed down liberalisation.

On 28 April 2012, Italo-NTV entered as the first competitor against Trenitalia and the Frecce services. After 10 years of competition, this example gave great benefits to not only the consumers and the new entrant, but also to the incumbent. The high-speed rail market in Italy increased around 120 per cent between 2011, the year before the liberalisation, and 2019, the last year before pandemic. Italo had great results in 2019, with more than 20 million passengers and a double-digit EBIT margin. COVID-19 had a big impact on the first private high-speed rail operator, but thanks to the strength of the years before the pandemic, the operator was able to survive and to continue the expansion. 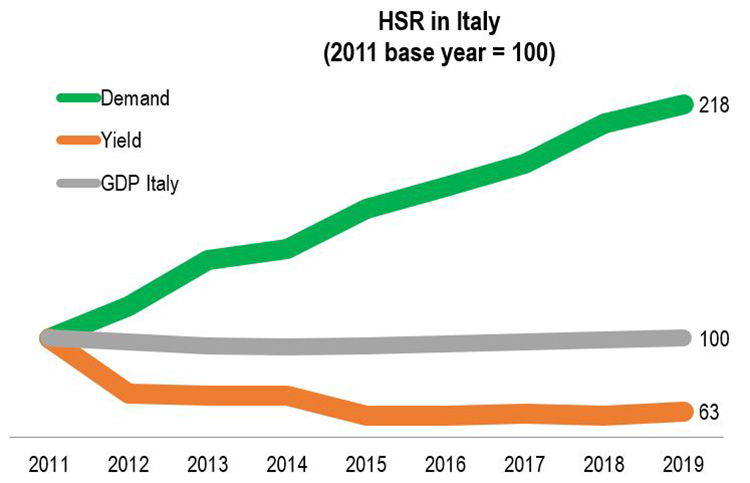 In the last four years, the fleet of Italo-NTV increased from 25 AGV to 51 AGV and EVO trains and during periods of the pandemic there were more than 110 services per day. The Italian government decided to reduce the access charge (the reduction of the component of the markup linked to the ability to pay of the railway operators) during the pandemic, the economic measure is confirmed to last until 31 March 2022. Italian travellers had the opportunity to benefit during the first year of competition with a reduction of 35 per cent of the yield of the tickets, increasing the possibility to travel to the different cities of Italy. At the same time, the increase of the trainsets, due to the purchase of rolling stock by Italo and Trenitalia, gave the chance to have a most efficient fleet and to increase the number of services and the quality of travel.

At the end of 2021, Italo-NTV had introduced the new service between Milan and Rome with 64 connections per day. The interesting aspect of the Italian liberalisation, it is that Trenitalia had to improve to answer the competition from the new entrants. It is not just a case that Trenitalia is one of the main protagonists of the new wave of liberalisation in Europe. The Italian incumbent will start the operation in Spain in the second part of 2022 as main shareholder of Iryo (45 per cent of the company), while it started the new international service with the ETR1000 trainset between Milan and Paris.

In Spain, the process of liberalisation has been a little bit more complex than in Italy, where it was a clear open access system. In Spain, ADIF and the Spanish Government went for three packages of services for the high-speed railway operator. Renfe won package A with most of the services. The Spanish incumbent decided to create AVLO, the low fare carrier, to be able to cover the part of the market with lower yield. ILSA, the company that has the commercial name in Iryo, won package B and it will be able to compete against Renfe with a good number of frequencies on the main routes of the Spanish network. 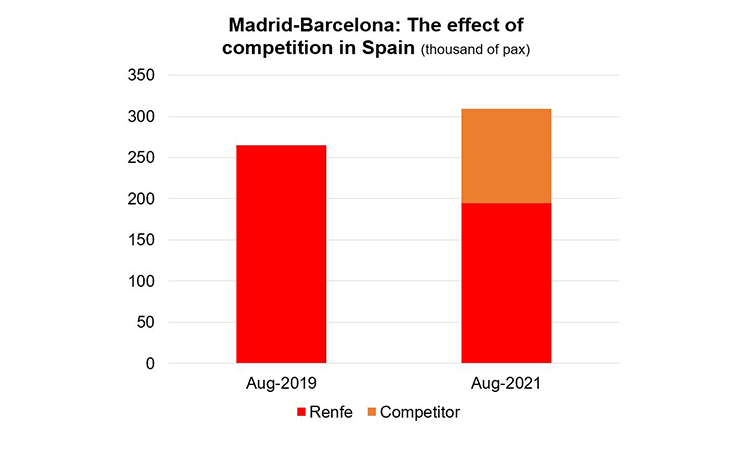 The third operator is Ouigo, of the French company SNCF, with a lower level of frequency and a business model focused on the low cost. Ouigo can operate in France with a yield of 5,1 euro cents per passenger km, less than half of the InOui product (2019 data). Ouigo Espana started the operation in May 2021 between Madrid and Barcelona; it was able to catch an important part of the market. In the month of August 2021, when Spain was hit by the fourth wave of COVID-19, the number of passengers between Madrid and Barcelona by high-speed rail increased in comparison with August 2019. The entrance of Ouigo was able to reduce the price of the ticket and to increase demand, even during the fourth wave of the pandemic.

The future of railway liberalisation and Europe

Ouigo is also an important player in France, in 2019, they reached 9,76 billion passenger km in France. The new entrant, Trenitalia, entered in December 2021 in the French market with a direct connection between Paris and Lyon as a part of the longer Paris–Milan route in competition with the InOui services. SNCF had a very strong product with more than 41 billion of passenger km in 2021, a yield of 10,8 euro cents per passenger km and a load factor of 71 per cent. It will not be easy for Trenitalia to compete with four connections per day (with an offer annualised of 284 million of seat kilometres between Paris and Lyon) against SNCF, but it is interesting that the Macron Government reached its target of liberalisation before the presidential election in 2022.

With the cases of Spain and France, while they seem to be the first cases after the liberalisation in Italy for the high-speed rail market, it is important to remember that South Korea introduced a competitor to Korail at the end of 2016 with the entrance of SRT. In general, there is a clear trend going for liberalisation of the railway market, especially in the European Union and the last development shows how the benefits of competition could be extended to more countries. Will Germany be the next target of new entrants in the high-speed railway sector?

Adj. Prof. Dr. Andrea Giuricin is CEO of TRA consulting, a strategic consultancy company based in Barcelona and Milan with international customers from Europe, Middle East, Asia, America working with the top management (CEO and President) in the strategic and operational decisions of railways companies, including the high-speed rail liberalised markets (Italy, South Korea, Spain). He is consultant for the CEO of Italo-NTV, the first private high-speed rail company in open access competition. Andrea cooperates and works with several Transport Authorities (CNMC in Spain, ART in Italy, CMA in UK, ARAF in France, SPAD in Malaysia, RSR in South Africa), with the European Commission (EC) and European Union Agency for Railways (ERA). He teaches Transport Economics at University Milano Bicocca in Italy. In the same University he is responsible for the development of transport studies at CESISP – Unimib, especially in charge of the centre on rail freight that includes main players and stakeholders. He is former visiting professor at China Academy of Railways Sciences in Beijing. Andrea is Senior Transport Consultant for the World Bank and for the United Nations. He has published several books and given analysis on the transport sector on TV and in newspapers (Wall Street Journal, Business Week, BBC, FT, Bloomberg, Reuters and The Economist). 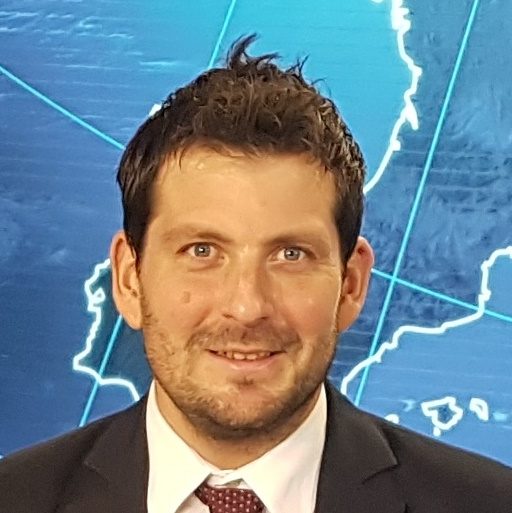