Construction General Director and Managing Director of Adif Alta Velocidad, Juan Pablo Villanueva, explains the unique challenges posed by the Madrid–Galicia high-speed rail line and the benefits that the route offers to the two cities and the environment. 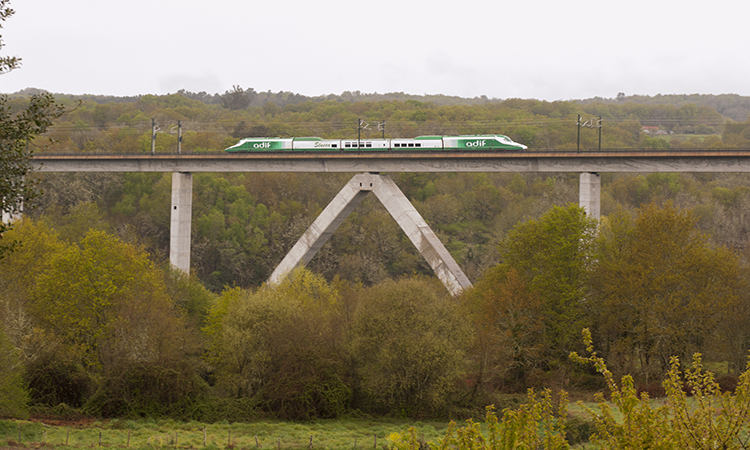 A train set crossing a viaduct in Arnoia.

The landscape of deep valleys and lush mountains that welcomes the lands of Galicia, in the northwestern part of the Iberian Peninsula, is a unique enclave that poses a huge challenge to one of the most ambitious actions carried out by Adif, the Spanish state-owned railway infrastructure manager; the high-speed rail connection to Galicia that was inaugurated on 21 December 2021.

The Galician railway routes have always been conditioned by a rugged relief that has hindered railway communications within the peninsular centre. In fact, the first direct line between Madrid and Galicia was not inaugurated until 1957, after more than 30 years of construction. Today, thanks to the high-speed line, the travel time is 2hr 15m from Madrid to Ourense.

The complex and mountainous orography is what makes the last section of the line unique; the Pedralba de la Pradería to Ourense section, and its permeability is something that characterises the route. To save the precious space, more than 66 per cent of the route has been executed, either underground or on a viaduct. The route, which entered service in December 2021. totals 118km, of which more than 10km runs through a viaduct and more than 126km through a tunnel (double-track). 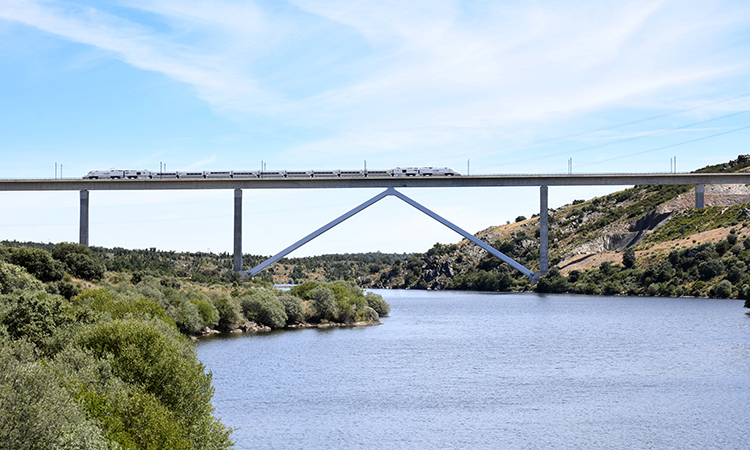 If the Central Ourensano massif meant an enormous challenge for the first half of the 20th century with the construction of the conventional line, in the 21st century the challenge has not been lessened, since a high-speed line presents very rigid layout parameters, with very wide radii of around 6,000m and maximum slopes of 25 thousandths, that force in abrupt areas like this to successively execute tunnels of great length and viaducts.

At the peak construction, more than 4,000 workers were involved in the execution works, with special mention to the viaducts.

There are 31 tunnels of the section, 23 of them are part of the Galician territory of the line. Although they were an important challenge for civil works, it has now reached a milestone in this sector at an international level. There is no parallel to such a succession of kilometres of tunnels in Spanish territory. In total, the right-track tunnels total 62.47km, 7.88km of double-track and 56.05km of left-track.

It is important to note that at the peak construction, more than 4,000 workers were involved in the execution works, with special mention to the viaducts. Unlike tunnels, viaducts are works that are visible and after a few years of their construction become part of the landscape where they are located.

In this intervention, all are made of prestressed concrete, built according to different typologies. The design of the most appropriate structure has been chosen in each case, considering aspects such as the need to save a channel, avoid affecting a protected area, or the impact on the environment or on heritage elements, as well as for the final environmental integration on the whole. These conditions determine the lengths of span and the most appropriate foundations. Based on them, the structural typology and its execution process are finally chosen.

There is a structure that has become emblematic of the line for its neatness: the double viaduct of Teixeiras, with a total length of 508m and a central arch of more than 100m high over the stream of the same name, a tributary of the Támega River. Its uniqueness lies in a structure that ensures great transparency and beauty, through central piles that exceed 90m in height and a separation of 132m between them, equivalent to two spans. 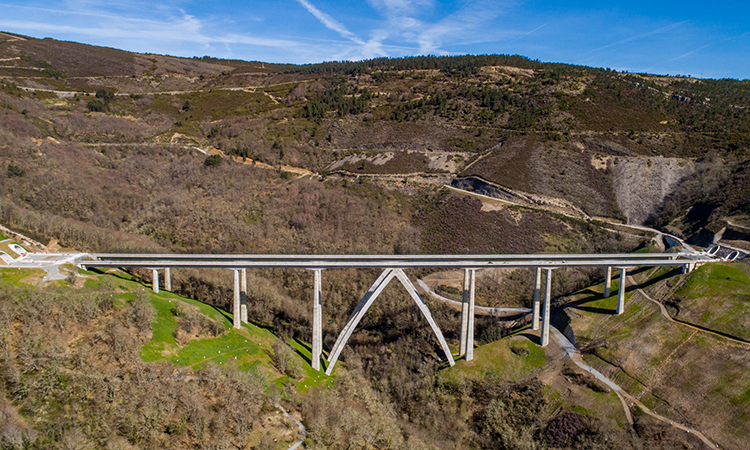 The rugged terrain, which generates the tunnel-viaduct sequence in a good part of the route, is also decisive when designing the superstructure. More than 500 workers intervened in its assembly. In the section of the UIC double-track (standard-gauge railway) that runs on Galician soil, more than 70 per cent of the track length does so on prefabricated plate track, one of its innovative aspects, and the rest, 29 per cent, runs on ballast.

Its unique orography also meant that the geotechnical reconnaissance campaigns, both in the project phase and in the construction phase, were decisive. We worked on the identification, analysis, and proposal of solutions against the different geological-geotechnical risks that were going to condition the construction of the tunnels in the most abrupt areas of the Pedralba–Ourense section.

In the same way, the high rainfall, the low population density and dispersion of settlements, the presence of natural and cultural values of great interest, meant a great effort and work for the preservation of the environment through the implementation of preventive, corrective and compensatory measures that have allowed for the best possible conservation of the space.

The environment of the action has protected areas with the qualification of Site of Community Importance (EU’s LIC standard) integrated into the Natura 2000, a network of biodiversity conservation areas in the European Union. The proper planning of the route has allowed only 0.61 per cent of the line to occupy these spaces.

For the protection of fauna, specific studies were carried out for the monitoring of species of interest, through monitoring and translocation of threatened species. Solutions were also sought for the adaptation of the temporal space of the clearings and noisier activities, and thus preserve the fauna during the period of reproduction of the sensitive species.

The historical heritage through which the line runs is of a high landscape and cultural value; it has extensive historical periods ranging from the Iron Age, through the period of Romanisation to the Middle Ages.

In the same way, the permeability of the line greatly reduces the barrier effect caused by the infrastructure. It should be noted that in the exploitation phase, 56 transverse drainage works were adapted for the passage of fauna. More than 56km of enclosure equipped with 70 escape devices were also placed to prevent the access of fauna to the trace and reduce the risk of being run over. Likewise, 10 linear kilometres of anti-collision screens were executed on the viaducts to reduce the risk of collisions of the birds with the train.

On the other hand, the management also carried out of the surpluses of the excavations of the tunnels. In localised areas, massifs have been crossed with pyritic materials in their mineralogical composition. This problem presented a potential risk of producing acidification of the waters around the landfills. The use of Tecnosols, à la carte soils made from organic and inorganic waste, has made it possible to neutralise chemical processes. Almost half a million cubic metres of material were treated with pyrite, with more than 52,000m3 of Tecnosol.

The historical heritage through which the line runs is of a high landscape and cultural value; it has extensive historical periods ranging from the Iron Age, through the period of Romanisation to the Middle Ages, in addition to including numerous Assets of Cultural Interest. One of the heritage elements of special relevance in the environment is the Via de la Plata, an extension of the homonymous Roman road that became the southern access to the Jacobean Route (Camino de Santiago) in the Middle Ages. The layout of this road has been the basis of the main communication routes developed in the area later, such as the current railway line. In that course, their itineraries are crossed up to 11 times. Taking advantage of the works, improvements and conditioning were made in its path, as in the term of Taboadela and Ourense.

The result of this spectacular work is a significant reduction in travel times between the capital of Spain and the northwest of the country. This is a tremendous opportunity for not only the economic development of Galicia by connecting with Madrid and Castilla y León, but also the improvement of the proximity between the large Galician cities as a modern, safe, and sustainable mode of transport. All this, using the most innovative techniques to overcome the constructive challenges, as well as respecting and protecting the environment. The high-speed corridor to Galicia is a clear commitment to the railway that assuring social cohesion, connecting remote areas, and helping economic growth.

Juan Pablo Villanueva is a Civil Engineer from the Universidad Politécnica of Madrid. He completed his training with management development programmes at ESADE and Transport Economics at the Universidad Carlos III of Madrid. With more than 20 years of experience in the railway sector, after his time in the private sector as a Project Engineer, he joined the public company, developing his professional career with various roles of responsibility, from the beginnings as Construction General Director at Adif until he was appointed Construction General Director and Managing Director of Adif Alta Velocidad in 2018. 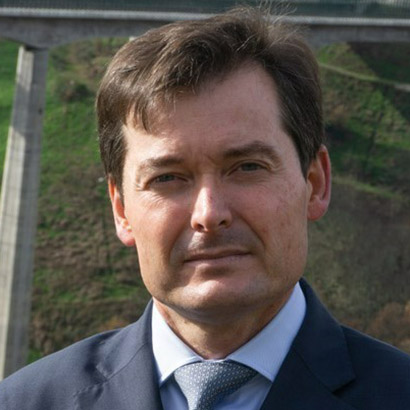