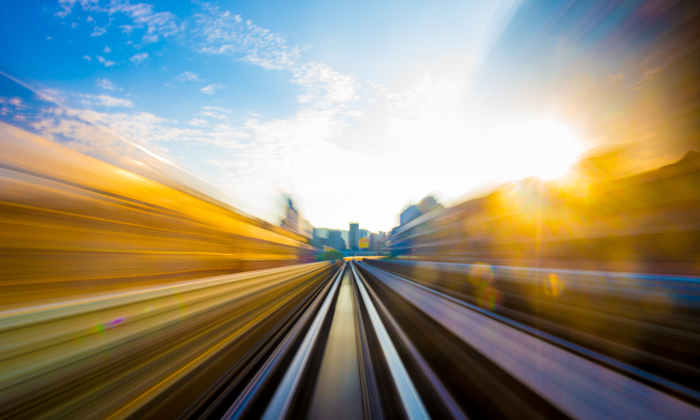 From the outset of the TGV development, it appeared that articulated train architecture would be the most suitable solution to satisfy the objectives of safety, comfort and cost-efficiency. Once the general architecture of the trainset was adopted, it was necessary to define the bogie architecture and its main characteristics.

Alstom high-speed bogies contribute to the TGV mechanical behaviour in the following fields:

This first test campaign led to the development of bogie architecture with the traction motor and the gearbox mounted under the carbody in order to optimise the mass distribution. The result of these studies was a prototype (named Z 7001) with a wheel base of 2.9m which allows high speed levels to be reached.

From then on, the TGV bogies were all developed with a large 3m wheel base allowing exceptional levels of stability, even at high mileages on a large track clearance concept with track laid at an incline of 1/20th, unlike other solutions which rely on bogies with short wheel bases with tight track clearances layed at an incline of 1/40th and which required very important anti-yaw torques between the bogie and the carbody to ensure stability.

Regarding the ride quality, the architecture of the TGV with the articulated trainset is also a great advantage because it allowed the achievement of optimum uncoupling between the bogie and the carbodies by the use of a pneumatic suspension with very low frequencies of about 0.75 Hz in the vertical and transverse directions. The damping of the system in the vertical and transverse directions was obtained by placing hydraulic dampers between the carbodies. The articulated trainset and the positioning of the bogies between the carbodies are also favourable to the installation of a bogie with a large wheel base.

Return from experience of 25 years of operation

The TGV high-speed bogies have been in commercial operation for 25 years. This experience has confirmed the very good stability of the bogie with the low evolution of the conicities. The evolution of the conicities shows mean values stabilised around 0.2 for mileages greater than 600,000km. At this conicity level, the critical speed remains significantly higher than 450 kph.

The high-speed bogies were designed to allow a dedicated and component-based maintenance organisation to meet the essential requirements of:

The bogie key components have all reached remarkably high life time potentials, which can be defined as follows:

The reliability of the axle box bearings is another element essential to the safety and availability of the trainsets. The current performances of these bearings are quite remarkable and can be defined as:

One of the constant areas of improvement in the design of high-speed bogies has been with weight reduction, which has been essential in order to reduce the bogie forces acting on the track. The main actions conducted to reduce the unsprung masses and the gross weights were aimed at the following main components: wheel and axles, transmissions and frame structure. It should be noted that between the TGV/ATL and the latest TGV Duplex bogies, the weight of the frame has been reduced by 200kg.

For the transmissions, the weight reduction has led to the use of light alloy for the motor axle and the gearbox. The studies defined the structures whose stress levels are consistent with the fatigue criteria of the material and they also consider the effects due to the temperature variations which generate geometrical modifications between the bearings and the bearing cases.

Perspectives for the future – distributed power

Progress made in the field of electronic power components has made it possible to considerably reduce the size of train traction systems. They can now be distributed below the floors of cars, rather than being concentrated in the lead and rear power cars, as in current TGVsTM.

The AGVTM, the latest generation of very high-speed trains developed by Alstom, does away with the concentrated power set-up, in favour of a system whereby power is distributed throughout the entire trainset. This design frees up extra space for passengers in the power cars. The result is 20% extra floor space, which can be used as operators see fit: either to increase the capacity of the train by installing extra seating, or to create dedicated areas such as lounges, business areas or leisure zones.

Distributed power also means that cars can be accessed all along the platform, as opposed to traditional trainsets, whose power cars take up the beginning and end of the platform (as well as the middle in the case of double trainsets).

Alstom’s power distribution set-up is based on the ‘triplet’ principle. Cars are arranged in groups of three: two cars have an engine unit attached to a ‘power’ bogie and are placed either side of a car featuring a transformer on a ‘trailer’ bogie. To form a trainset, ‘triplets’ are grouped together, with a car placed between each set carrying auxiliary equipment. The length of the train thus varies according to the number of triplets assembled.

The AGVTM features 20% extra space and offers a capacity of 300 to 700 passengers. Unlike the TGVTM, which must be made up of one or two trainsets of eight cars, the AGVTM can be configured in several versions, with seven, eight, ten, eleven, thirteen or fourteen carriages. This design offers operators a range of trains to meet every capacity requirement. The new design consumes 30% less energy than a TGVTM and by reducing the number of bogies when compared to traditional trains and by increasing passenger capacity, maintenance costs can be reduced by 30%.