The Koralm Railway (or Koralmbahn) is a new double-track line approximately 133km-long that will run between the Austrian cities of Graz and Klagenfurt and is part of the Baltic-Adriatic Axis which connects the Baltic Sea with the ports of the upper Adriatic. At the heart of the new railway line is the Koralm Tunnel (approximately 32.9km-long) and once completed it will be one of the longest tunnels in the world. 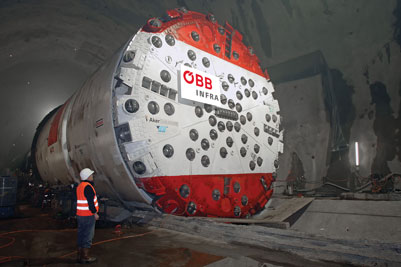 The Koralmbahn is designed for high-speed operations as well as for regional and freight trains. The layout of the line allows maximum speeds of up to 250km/h. Although full commissioning of the line is not until 2023, approximately half of the infrastructure is already under construction or in operation.

The first stage of tunnelling work on the Koralm Tunnel has been successfully completed, with a high-tech tunnelling machine carrying out exceptional work. The tunnelling machine’s drill head has a diameter of almost 10m which required the use of no less than 45 heavy transport vehicles to transport it.

The tunnelling machine is not only an enormous steel giant that pierces its way through the earth; it also holds sophisticated, cutting-edge technology such as hydraulics, electrics and state-of-the-art control software. Sitting in the cockpit of the tunnelling machine are technicians who control the components of the machine electronically via three computers. Wi-Fi connections and fibre optic cables are used to ensure that data is available at any time and that it can also be checked on ground level. The rotating drill head is equipped with ‘roller bits’ which break out bedrock from the mountains before crushing it. The resulting break away rock is loaded via its own openings in the shield onto a conveyor system and transported outside for further use.

In early-November 2013, drilling commenced on two tunnels through the mountain in the direction of Styria from Lavanttal. In the south tube the existing 7.6km-long exploratory tunnel is being upgraded by expanding it to the full section. Moreover, an additional 3.3km of new tunnel are being built in the full section using the ‘New Austrian Tunnelling Method’ (NATM). Tunnelling of the north tube (12.6km-long) is at an advanced stage. Construction will be on-going until the summer of 2020 and the contract value is approximately €300 million. The tunnel breakthrough in the south tube is expected in 2016. The tunnelling distances in the south tube in Styria are currently over 7km, with a daily tunnelling length of up to 38m.

The first few kilometres of the Koralm Tunnel on both the Styrian and Carinthian side will be constructed either by open cut or by blasting and excavator tunnelling. Until now the two Styrian tunnel sections have been, and still are, classic examples of the application of the so-called ‘New Austrian Tunnelling Method’ – a globally recognised technology that breaks away rock using blasting or excavating and the excavated areas are then immediately secured with shotcrete and tunnel arches, and then anchored.

Partial operation on the Koralmbahn

In 2011 alone (the first year of operation of the new line between Wettmannstätten and Graz (Styria)) there were over 1.4 million passengers. The travellers were able to benefit from a significant time advantage over the existing railway route or if they had decided to travel by car. And in 2012 and 2013 this trend continued. When the complete line is fully-commissioned, further increases to passenger numbers are expected, because on the southern section the available passenger potential is similar to that of the west route to Salzburg. The Koralmbahn also offers great benefits for freight transport as far as transport performance and speed are concerned.

The longest bridge of the Koralmbahn

A very special construction is underway near Stein – the Stein Drau Bridge. Once completed, it will be 600m-long which will be the longest bridge of the Koralmbahn and one of the longest railway bridges in the whole of Austria. The bridge is being built using the so-called ‘Incremental Launching Method’. Here structural components are concreted to the northern bank of the river and then pushed with hydraulic presses across the river. The four structural segments are constructed with reinforced concrete box girders and further reinforced with their own cables. In order to reach the correct position a ‘launching nose’ made of steel was attached to the structure, which reaches up to the next support points (river piers) at these feed rates. During the incremental launching operation special plain bearings are used to allow the launching operation.

When completed, the structure will be 600m-long and weigh 18,000 tonnes. In a total of 23 incremental launching operations, 15,500m³ of concrete and around 1,700 tonnes of reinforcing steel will be used. The longest span between two river piers will be 70m. A total of nine river piers and two abutments will be built together with the necessary earthworks. Construction in the shell is scheduled to be completed in October 2014.

As was the case for the previous contract sections of the Koralmbahn in Carinthia, a regional construction company called Massivbau from Ebenthal near Klagenfurt was commissioned to build the bridge. The degree of regional value added on the Koralmbahn is very high in Carinthia; approximately 70% of the construction and ancillary works, such as transportation services, were carried out by regional small and medium-sized businesses.

European Railway Review would like to thank Christoph Posch, Spokesman for Styria, Carinthia, East Tyrol and Southern Burgenland in the Corporate Communications and Marketing Department of ÖBB-Holding AG for submitting this article.