The Spanish high-speed network has provided the country with one of the most modern and advanced forms of transport to currently exist, placing it at the forefront and as a world benchmark on the matter for many different countries wishing to implement and develop similar railway systems or infrastructures. How and why is Spain regarded so highly? Pedro Fortea, Director of Mafex – the Spanish Railway Association, explores.

Spain has one of the largest and most modern railway infrastructure networks in the world. Development of this network has involved the direct participation of a world leading industry that is noted for its high degree of internationalisation and innovative technology.

n line with EU regulations in terms of both freight and passenger transport, the liberalisation of the sector is taking place in Spain, which will involve the participation of private companies in the operating of railway transport services in direct competition with the state-owned company RENFE. A series of private companies have already been working in the freight sector since 2007 and the process is now underway in the passenger sector

One of the most notable characteristics of the railway system in Spain is the coexistence of different track gauges over its network: the Iberian or conventional gauge measuring 1,668mm and currently in use over most of the Spanish railway network, the standard, UIC or international gauge measuring 1,435mm that is present on the highspeed lines, and the narrow track gauge, which includes all gauges below 1,435mm and that, particularly in Spain, is practically the metre gauge (1,000mm).

In light of this unique characteristic of our railway network, the Spanish industry, led by the main manufacturers of rolling stock nationwide, has developed variable track gauge systems that enable passenger trains to use the two main gauges: international and conventional. This is, without doubt, a successful solution at present and, therefore, can be exported to other countries where similar solutions may be required either internally or on their borders with neighbouring countries.

High-speed network: one of the most modern and advanced in the world

Another aspect defining the current Spanish railway network is its high-speed network. Following over 20 years of operations, with the first line connecting Madrid and Seville starting in 1992, this network has provided Spain with one of the most modern and advanced forms of transport today, placing our country at the forefront and as a point of reference for many different countries wishing to implement and develop similar systems or infrastructures.

At the end of 2014, the Spanish high-speed network had 2,322km of UIC gauge high-speed lines for commercial use and over 2,000km undergoing study, planning or construction, making it the most extensive in terms of operational kilometres in Europe and third in the world after China and Japan. Over 120 million people have travelled in the 300-plus high-speed trains serving almost 100,000 users every day, connecting around 80 Spanish towns and cities and acting as a key element in improving the structure of the country and the quality of life of its citizens.

All of this development in terms of high-speed has also made our industry a world benchmark on the matter in terms of the design, construction, management and maintenance of infrastructures and rolling stock thanks to the wide range of companies that, through the different products and services they offer, are now able to deal with any type of demand from the railway sector anywhere in the world, with the most guarantees of quality, reliability and price-quality ratio.

With regards to the signalling of railway infrastructures, Spain is the European country with the highest degree of implementation of ERTMS (the European Traffic Management System). ERTMS is a train command and control system designed to advance in terms of interoperability, streamlining the compatibility of signalling and communications between track infrastructure and on-board equipment. Over 2,000km of our network is equipped with this system, which is the most modern and advanced to date.

Spain also has the longest interoperable stretch in Europe. This is the route between Barcelona and Malaga, where rolling stock equipped with ERTMS runs along an infrastructure supplied by four different manufacturers.

Lastly, since December 2013, RENFE in cooperation with SNCF, has been operating the Madrid–Barcelona–Marseilles and Barcelona–Paris, Lyon and Toulouse lines, connecting 17 French and Spanish cities.

The Spanish railway industry has been involved in the development and modernisation of the Spanish railways since the very beginning, in some cases with companies over 100 years old, developing and evolving its capacities and solutions to meet the requirements and needs of the different players seeking railway solutions.

This has provided companies with a degree of technological development and has enabled them to increase their capacities and experience in all segments: medium and long-distance, conventional, high-speed and freight transport.

It is therefore essential to ensure the appropriate planning of investments in infrastructures, particularly in railways, to ensure the sustainable development of this form of transport in any country and, in turn, provide a competitive and state-of-the-art railway industry that stands at the forefront of not only the domestic market but also foreign markets.

The presence of Spanish railway companies in general and of Mafex member companies in particular in foreign markets has increased notably over the past decade. The experience acquired in the domestic market and the increase in the railways in comparison with other forms of transport to solve the needs of different countries, regions and major cities around the world have, without a doubt, favoured this increasing presence abroad.

Nowadays, Mafex member companies have taken part in, or are involved in, railway projects in more than 80 countries over the five continents. The signing of contracts associated to these projects often means that being physically implemented in different locations on a stable basis is a need or a must.

Insofar as the projects completed, countries such as Brazil, the USA, India, Turkey, Algeria and Chile are most noteworthy, where a greater percentage of companies to have developed or taken part in different contracts and projects are concentrated. Likewise, European countries such as Portugal, the United Kingdom, France and Poland are relevant destinations for Spanish railway companies.

The participation of Spanish railway companies in international projects covers all possible areas; from the most demanding from a technological point-of-view, such as high-speed projects, to urban, medium and long-distance, as well as freight transport.

These companies form an entire industrial sector of service providers that fully cover the value chain required by any railway project: from its initial, preliminary phases to the construction of the infrastructures themselves, their traffic management, signalling and telecommunications systems and the supply of the necessary rolling stock, complete network commissioning and its subsequent maintenance, renewal and/or expansion, depending on each case.

There are many different examples and success stories in which the Spanish railway industry has played a significant role, including:

These companies have been able to evolve towards a global business model, while adapting locally to the needs of each client. This local experience and the capacity to adapt to different international situations have made the Spanish railway industry a benchmark worldwide to be considered by any country wishing to have modern, sustainable, efficient and competitive railway infrastructures.

The ultimate aim of the Spanish companies is, therefore, to help create and implement a more sustainable, efficient transport system that best adapts to each market. The success of this objective is based on exporting the know-how acquired during the modernisation of the Spanish railway system, their extensive international experience and their continued support for the research and development of new technologies to improve world railway transport. 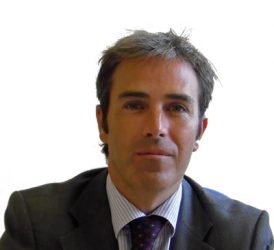 After spending some years as the Assistant Manager of Fundigex – the Castings Exporter’s Association of Spain – Pedro Fortea became the Director of Mafex in 2004 and has helped to develop its professional activity. Pedro studied at ESADE Business School, Escuela Universitaria (Cámara de Comercio de Bilbao) and Deusto University.