Accuracy, quality and speed; how Network Rail are using ‘high speed handbacks’ to reduce delays and save the British tax-payer money Hundreds of thousands of passengers and businesses across Britain are benefitting from the successful completion of Network Rail’s £150m Christmas investment programme as part of its Railway Upgrade Plan, resulting in better, more reliable […] 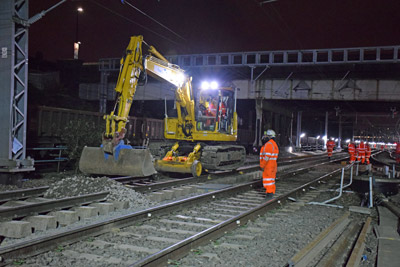 Accuracy, quality and speed; how Network Rail are using ‘high speed handbacks’ to reduce delays and save the British tax-payer money Hundreds of thousands of passengers and businesses across Britain are benefitting from the successful completion of Network Rail’s £150m Christmas investment programme as part of its Railway Upgrade Plan, resulting in better, more reliable train services and improved passenger facilities. An extraordinary amount of planning goes into preparing for large-scale engineering projects such as those delivered at Christmas. Planning starts months and sometimes years in advance, looking at train services, passenger impact, resources, equipment, availability of engineering and haulage trains, staff, safety concerns and costs – all interconnecting aspects that must be evaluated and considered to ensure a smoothly and successfully run project that finishes on time and on budget even as Britain was battered by a succession of Atlantic storms. Thankfully, that is exactly what happened this Christmas and the work was a resounding success, prompting transport secretary Patrick McLoughlin to “pay tribute to the men and women who have been working in challenging weather conditions for much of the time.” High praise indeed. A new, advanced approach to railway engineering, never before implemented on this scale, is one of the reasons for this success, helping to reduce delays for passengers and saving taxpayer-funded Network Rail hundreds of thousands of pounds by allowing trains to run at high speed following the completion of many of its railway engineering projects. Global Railway Review speaks with Steve Featherstone, Programme Director for Track at Network Rail, to find out how this was possible and get more insight into the techniques used. “The railway is the lifeblood of Britain, generating wealth valued at £12.8 billion a year. Every single day, over 4.5m journeys take place on the railway in Britain and this unprecedented growth is set to continue so that, by 2020, another half a billion rail journeys will be made each year.

It is Network Rail’s responsibility to run, maintain and develop Britain’s 20,000 miles of railway tracks and signalling, 40,000 bridges, tunnels, and viaducts, 6000 level crossings, and 18 key stations. But the rail network we’ve inherited is an ageing Victorian infrastructure, parts of which date back to Brunel’s days and are in desperate need of upgrade and modernisation; electrification, signalling replacement, track and ballast renewals, bridge repairs, switches and crossings upgrades, all of which are absolutely essential to running an efficient, safe and reliable railway that is experiencing ever increasing demands on capacity.

At Christmas and New Year over 20,000 engineers, fondly referred to as our ‘Orange Army,’ worked on over 500 projects nationwide in some atrocious weather conditions as part of the Railway Upgrade Plan to spend and invest £38 billion into the railway over the next five years to deliver better, faster, greener services, with improved punctuality, reliability and safety.

A mammoth strategic, logistical and operational task as it is, the work is further compounded as the upgrades must be completed while still maintaining an operational service to passengers. We must carry out our engineering at night when trains are not running, during bank holidays or weekends when traffic is low, or occasionally side-by-side a live network. Impact to passenger travel is always a top priority and we try to minimise disruption wherever possible. It’s a tricky balancing act of carrying out upgrades to improve future travel, without disrupting current services. Either way, the travelling passenger is always at the forefront of our thinking.

Typically, after major track upgrades are completed, we have to put speed restrictions in place for safety reasons – to allow freshly installed ballast to settle. These speed restrictions can cause disruption to passenger journeys and can cause us to incur significant compensation costs as a result of the disruption to train operators’ normal service. This Christmas, for the first time on this scale, a number of track upgrades were carried out under a new, complex methodology that allowed trains to start using the railway at high speeds – in some cases as fast as 125mph – as soon as they had finished, thanks to a series of new, advanced railway engineering techniques allowing us to focus on ‘high speed handbacks’. Higher speed handbacks were undertaken in the past by British Rail but had fallen out of use over the last 20 years. Network Rail has reinvented these with modern monitoring and installation practices which allow us to deliver higher speed handbacks in parts of the railway in which they had not been achievable in the past. The key to achieving a high speed handback is to ensure track is installed at each stage to its specific design tolerances, that care is taken while tamping to get the track to its final exact co-ordinates and that welding and stressing is completed as part of the core work where sufficient access is available, rather than scheduled for a later date, In short, it’s about getting it right first time.

This improved approach delivers significant benefits for passengers, suppliers, Network Rail, train operators and the millions of taxpayers who help fund the railway in Britain:

The increased focus on accuracy and quality and getting it right first time has been the key to achieving high speed handbacks and has led to improved asset reliability and reduced installation costs. A number of advanced engineering techniques have been developed to assist in implementing this approach, including: New track going in at Doncaster

We are still evaluating the benefits of these new methods now, but the numbers coming in so far are very promising and match our predictions. Using these techniques, we saved £417,000 in compensation payments to train operators for the switches and crossings, overhead line equipment upgrades and plain line renewal programme on the East Coast Main Line around Doncaster railway station alone. And at Langley on the London North East route, we saved around £175,000 in compensation payments to train operators following the high speed handback of 330 yards of plain line track renewal. These are just two examples, but we predict many more savings across the network as we look to roll out this method of working nationally.