Around 100 participants, coming from railway industry and the start-ups world, met to discuss links between rail digitalisation and freight & passenger services. 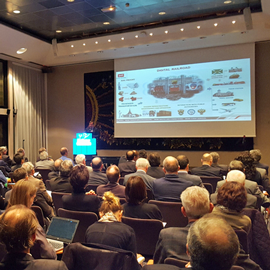 UIC organised the UIC DIGITAL Day on 7 October in Paris. Around 100 participants, coming from the railway industry and start-ups world, met to discuss links between rail digitalisation and freight & passenger services. Representatives came from Europe as well as beyond. In a rapidly changing work environment this workshop had the objective to build bridges between the different generations and between railway experts and digitally skilled young people who could, if they find a way of cooperating, together reinvent the railways.

Based on a business-oriented approach, the discussions aimed to show the participants in a practical way how digitalisation can bring added value to freight and passenger services, what kind of economic benefits members can expect from it, what its limits are, etc. UIC Director General, Mr Jean-Pierre LOUBINOUX, said: “With the emergence of new technology we have entered what Jeremy Rifkin calls the third industrial revolution: the Digital Era. Transport modes and railways as the backbone must take advantage of this new opening. After technical and administrative interoperability we must carry out the standardisation work of integration between informationisation and industrialisation.

“CDOs (Chief Digital Officers) are appointed among most of our members and UIC on behalf of the railway community decided at the last General Assembly to create a digital platform. This platform aims to share creative ideas, to ensure harmonisation, to support new developments and to boost innovation. It has identified three main areas of potential interest: security, services and productivity. More specifically, three workshops have been organised this year: in Washington in May on Safety; in Beijing next March on IoT input in Services and Infrastructure. […]

“I take this opportunity to thank Yves Tyrode, CDO of SNCF, for his chairmanship of the UIC Digital Platform. A new governance of the Platform will be announced during the next UIC General Assembly on 1st December in St Petersburg. […]

“In addition, a Digital Awards campaign has been launched with the thousands of start-ups that can boost the traditional creative process of rail companies with crowd-funding, crowd-sourcing, open sources and open data. UIC has also initiated the development of several prototypes known as Proof of Concepts: concrete answers to concrete questions such as the detection of shunting defects on track circuits. These prototypes, presented to our members, will be the basis for new IRSs (International Railway Solutions) which will then be passed on to industry.

“So to conclude this quick overview, if we know that by 2030 two billion people will be urbanised; two billion people have no access to any means of transport; two billion people live on less than one dollar a day; and that there will be two billion more people on earth if we realise that by 2030 the Internet of Things (IoT) will add 10 – 15 trillion dollars to global GDP; if we agree that transport is the mobility of goods and people and is therefore the key to social economic growth; if we share the opinion that rail is the backbone of a new optimised transport modal mix, then the question is not if or when we survive this third digital revolution, but how fast we catch up with it and become a vector and driver of it. […]

“UIC, on behalf of all its members around the world – some more advanced or developed than others – but all with the same concern and determination to be developing together, has already started to share, to open and to connect.”

Among key messages heard during this one day conference, we can note that there is a need to have a user-centred approach and customer centricity and operational excellence are major objectives – culture and speed of innovation are crucial factors.

Björn Westerberg, CEO of ASTOC (Association of Swedish Train Operating Companies) highlighted on the digital disruption which is happening all around us, and now. He said: “Digital is disrupting the way we need to think about delivering on our transportation mission.”

He followed by: “Progress is underway, but we must accelerate. We in the railway industry need to take advantage of the disruptions and capture the opportunities.”

The “UIC DIGITAL Day” gave also the opportunity for several start-ups to concretely present their projects at the benefice of the Railways, as for example the luggage robot Effibot currently tested at Paris Gare de l’Est Railway station.

This workshop also gave the possibility for Railways and start-ups to meet and learn from each other in order to maybe reinvent the Railways and mobility in the future. Beyond this workshop, the main ideas and messages exchanged during that day will feed the UIC Digital Progress Paper, a document published for the first time in May 2016 and which catalyses step by step useful inputs following an iterative approach to enrich the Railway community and partners.

Presentations from the DIGITAL Day can be viewed here: www.uic.org/digital.

By International Union of Railways (UIC)