Condition Based Maintenance for Japan’s railways

Since Japan’s first railway line between Shimbashi and Yokohama opened on 14 October 1872, Japanese National Railways (JNR) has been expanding the railway network and improving the technology it uses. For Global Railway Review, Kenzo Fujita, Senior Advisor at the UIC and Secondee from East Japan Railway Company (JR East), explores how moving to Condition Based Maintenance (CBM) for rail assets will help improve operational performance and reduce maintenance costs. 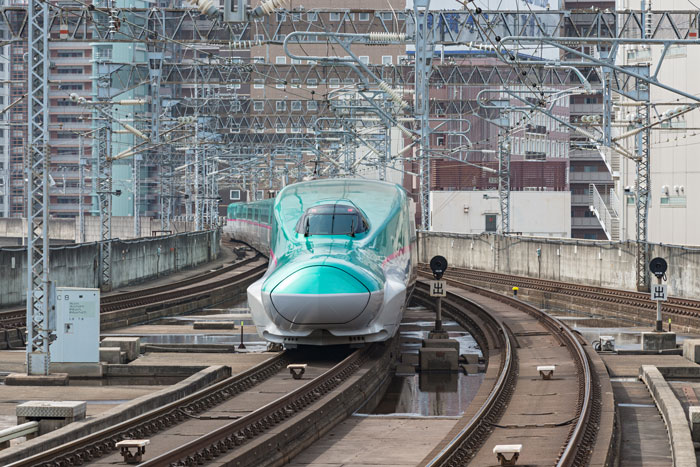 In 1987 JNR was privatised and divided into seven railway companies – six covering passengers and one for freight – and was called Japan Railways Group (JR Group). JR East is one of them and today its network covers 6,263.1km of conventional lines and 1,194.2km of Shinkansen (high-speed) lines. JR East employs approximately 57,580 people and transports roughly 17.3 million passengers per day on average. Japan’s decline in population can be considered to have greatly affected railway operations. Maintenance expenses make up just under a third of overall railway operation expenses. With future decreases in population, the number of passengers will probably decrease too, naturally resulting in a decrease in railway revenues. That and the anticipated increase in personnel costs that will result from a reduced workforce will necessitate a drastic overhaul of the business cost structure. It is for that reason that we must change the way we carry out maintenance of railway equipment.

Currently, the maintenance, inspection and repair of rolling stock equipment is carried out using the Time Based Maintenance method, whereby components are maintained based on distances travelled and operating times, regardless of deterioration level. However, Condition Based Maintenance (CBM) is the way forward, where deterioration levels and signs of failure can instead be identified by monitoring components to show their condition, ensuring maintenance is carried out accordingly.

Up until now, TBM inspections were conducted at regular cycles (once every three months for conventional lines) to obtain data on overhead line irregularities. Decisions on whether or not to conduct repairs were made based on this data, and decision-making was carried out based on predetermined rules where repairs are conducted when set criteria are exceeded. Such criteria were determined based on the maximum progression of irregularity taking into consideration the overhead line irregularity at which wear could occur from past data and the three-month inspection cycle. As failure of overhead lines is critical for safe rail operations, the repair criteria was set with much leeway, taking into consideration maximum progression of irregularity under the assumption that inspections are performed to a set cycle. CBM is based on monitoring large volumes of data obtained, rather than performing inspections at set intervals. For overhead lines, obtaining displacement data from trains in operation would allow such displacement data to be obtained every day. Analysing that data would allow us to identify the rate at which the overhead line deteriorates. Decisions can then be made regarding the optimum time to conduct repairs while accurately predicting overhead line irregularity by individual location, allowing very streamlined preventive maintenance.

Changing from TBM to CBM means a fundamental change in the justification for deciding the priority matter for maintenance – for example ‘when to conduct what sort of repairs’. The effects of repairs will also greatly improve by being able to obtain overhead line irregularity data on a daily basis. With CBM, the cycle shown in Figure 1 can be followed on a daily and dynamic basis. The cycle entails obtaining data, identifying the state of deterioration by data analysis, making decisions regarding time/method/location of repairs, conducting repairs, and confirming and evaluating the results of those repairs. The more data that’s accumulated, the smarter the important decision-making process in maintenance is.
Justification for decision-making in TBM is prescribed by rules (internal regulations, etc.), so there is inevitably little awareness or ability to review them on a daily basis. 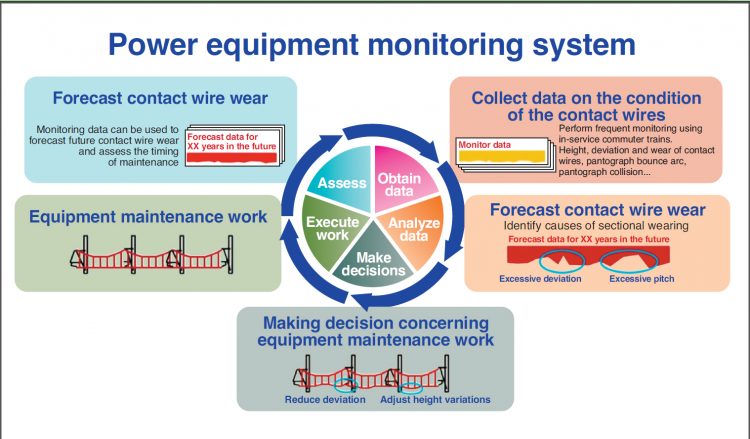 Figure 1: The cycle of maintenance work

With the introduction of EMU commuter trains (series E235) on the Yamanote Line in 2015, we were able to obtain tremendous volumes of big data that recorded the condition of various equipment. We are now aiming to introduce CBM that utilises said big data. We are also currently studying how CBM could be used for rolling stock in order to achieve more efficient maintenance. In this vision, CBM will help monitor the condition of individual rolling stock components and the big data obtained will be analysed, with maintenance for rolling stock planned and implemented based on the results. With CBM, the monitoring of track equipment came first, but it really could be applied to all equipment related to railway operations. Research and development (R&D) is taking place for items where development is completed and, where technically feasible, are being introduced and gradually expanded. Necessary maintenance data is accumulated for equipment set up continuously along lines (track and contact line equipment) by monitoring trains in commercial operation, and by sensors and communications technology for equipment set up in ‘points’ along the track (bridges, tunnels, substations, switches, etc.). By utilising the data obtained in real-time, we expect to be able to further improve safety and the reliability of rail transportation. This involves tasks such as identifying signs of rolling stock failure and acting on them in advance, as well as accurately judging the situation when rolling stock failures occur and dealing with those too. JR East exhibited the E235 system at the 2017 UITP Global Public Transport Summit. Some companies have already implemented similar maintenance, but the majority of visitors to our stand were interested in what we are trying to do and we were able to exchange information with each other.

Facing 30 years of company establishment, domestic and international social and economic circumstances have changed dramatically, and it is necessary to change our traditional methods of work. CBM is one of the new ways to perform maintenance. In Japan, it is said that the production-age population will decrease by 20% in 2035. In preparation for this circumstance, we will seek advanced technology and make further efforts in R&D with the aim of innovating railway systems.