Power grids are becoming more intelligent to keep energy consumption within a given band thus avoiding cost-intensive load peaks. The 50Hz energy market operates and optimises in 15-minute intervals, which is considered a lengthy period compared to the dynamics found in railway electricity grids. In the Swiss Federal Railway (SBB) power network, the highest peaks typically have a duration of less than one minute, but can be as high as 70MW. For Global Railway Review, SBB colleagues Raimund Feldmann and Andreas Fuchs showcase SBB’s first steps toward a railway smart grid by implementing ‘peak-shaving’. This is when a high performance IT system identifies peak loads, selects appropriate thermic energy consumers, and switches them off for just a short period of time. The authors also explore future potential steps, which may combine load balancing approaches with real-time information from SBB’s Rail Control System (RCS). 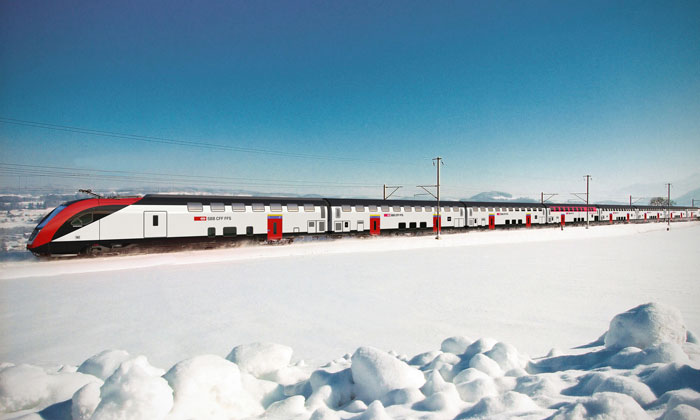 WITH 103 trains a day per main track, SBB operates the busiest conventional railway network in the world. Maximising inter-dependent aspects, such as utilisation of the track and electrical grid-capacity along with simultaneous energy efficiency, is a significant issue.

In railway companies, energy is a directly visible entity because it yields operational costs. Energy management is therefore a widely discussed topic. Adaptive train control – or ADL – links dispatching from the train operation centres with operations in the cab and SBB use the technology to minimise conflicts and boost the precision of rail services. An additional benefit is that ADL and EcoDrive save energy: In 2016, 50GWh were saved during a total of 467,000 train control operations, which constitutes a 19 per cent energy savings increase compared to 2015.

Power management is a relevant topic on all stages of planning, from timetable planning to minute-by-minute operations. For example, when using the Rail Control System (RCS) for train disposition, to the actual moment in real-time: Stochastic power demand peaks cannot be totally avoided and therefore real-time capable power demand control is required in addition to optimal planning.

Short power demand peaks happen when, on top of the power band for heating or cooling, stochastic, coincidental demand by electric engines occurs. The demand peaks last less than a minute and therefore the temperature of track switches and the train cars’ cabin air change only slightly when heating is suppressed for this small amount of time. Since the resultant heat loss is also small, there is no significant subsequent demand peak – known as ‘rebound’ – once heating is re-enabled.

SBB is currently implementing this first use of heaters for peak-shaving during these few high demand peaks of a year. At 0°C, heating demand at SBB is approximately 100MW. Now, by utilising this method, 70MW of this heat-band becomes flexible in near real-time.

Demand peaks necessitate the bands of reserve power guaranteed for every second of the year to be widened. Obviously, power capacity that is used for only seconds to minutes per year is extremely costly. Therefore, if reliable peak-shaving is available, reduction of the power reserve and the reserve’s back-up is possible – up to approximately 10 per cent of maximum power.

Agile development of the IT system for demand side management

The specific framework requirements of the IT system for peak-shaving – the first case of demand side management – became clear at the start and included the following:

A system of systems that require real-time operation

SBB’s Energy Management System provides the input data for the demand side management control system, which detects the peaks and selects the heaters to be switched off. The specific interface required runs on a distinct server. Once a peak is detected, a suitable set of heaters must be selected with turn-off signals generated within fractions of a second. Further interfaces and systems also come into play since heaters and switches of train cars have their own telemetry platforms.

Laying the ground for future extensions

Since peak-shaving with heaters is only the first step in SBB Energy controlling its power, the system needs to be sufficiently robust to cope with future business cases and system requirements.

The explorative character of the project meant that not all questions could be answered at the start as they required knowledge gained from practical experience.

We therefore decided against the classical project approach with fixed phases of high-level 63 design, low-level design, implementation and testing. An initial proof of concept helped to reduce overall risks by answering the most urgent questions required to select our basic system architecture. Thereafter, an agile approach was taken with several well-defined increments. Basic functions were quickly developed which allowed us to gain practical experience for adjusting the requirements and the development backlog. SBB experts and external development partners constantly adapted and re-prioritised the user-stories in close cooperation. This again minimised risks and helped keep the project within budget, whilst allowing new ideas to be either implemented or postponed.

Perspectives of demand side management

A railway company can benefit from load management in the following three areas:

If production and import/export into/from an electrical grid as well as demand can be controlled, the options to achieve stability of the railway electrical grid double. Business continuity measures such as putting heaters into sleep mode in case of power shortage are envisioned.

A power capacity reserve that is not utilised for the majority of time is very costly. Peak-shaving allows part of the corresponding power reserve to be reduced, increases the average duration of power park operation, or allows more trains to run on the same infrastructure. This leads to a higher degree of system utilisation and lower specific costs.

The next step is to smooth the electric demand curve by, for instance, influencing the engine’s traction motors or by predictive control of heaters and air conditioners. Smoothing the demand variations that stem from SBB’s coordinated timetable of regular-interval services creates greater freedom of operation for SBB’s energy trading, potentially being worth millions per year.

By implementing load management, SBB aims to cut peak electrical loads and thus counteract the projected peak load increase. This system entails purposely disconnecting loads or reducing their power drain during a peak period. Turning off heating power for typically less than a minute reduces power-demand on the traction power network but has no effect on customers’ travel comfort. The feasibility of controlling train coach heaters was confirmed in studies in the climate chamber and on a pilot train. SBB’s goal for load management is to regulate 150MW of power by 2025. The first stage with heaters is currently being implemented and will yield approximately 70MW of switchable load by 2023.

The professional depiction of future mobility being efficient in terms of both capacity and energy is a ground-breaking innovation for modern railway operation on extremely busy mixed traffic networks. Increasing energy efficiency is of great strategic relevance for SBB as it helps secure rail’s environmental advantage over road in the long-term. Thus, SBB plays a key role in implementing the federal government’s Energy Strategy 2050 and developing sustainable mobility in Switzerland.

RAIMUND L. FELDMANN has a Master’s degree in computer science with a minor in economics. He has worked as a consultant in Switzerland, Germany, and the USA, focusing on process and quality improvement, knowledge management and learning software organisations. Currently, Raimund works for SBB as a Project Cluster Manager in the IT Department for Infrastructure (SCI).

ANDREAS W. FUCHS has a PhD in climate physics and a Master’s degree in medical physics/medical technology. He has worked in the field of electrical energy technology, mechatronics, electrical drives and batteries, as well as in control of isolated or grid coupled energy systems. At SBB Andreas is responsible for conceptualisation, implementation and further development of the load management system, allowing demand response in the electrical grid for railway supply.