Ballast is the weakest link in rail superstructure. However, by mounting Under Sleeper Pads (USPs), ballast tamping requirements can be reduced and the availability of the track can be significantly increased. Here, Getzner colleagues, Dong Huiding, Ferdinand Pospischil and Harald Loy compare elastic and non-elastic track components, with details of results already witnessed on sections of China’s heavy-haul network. 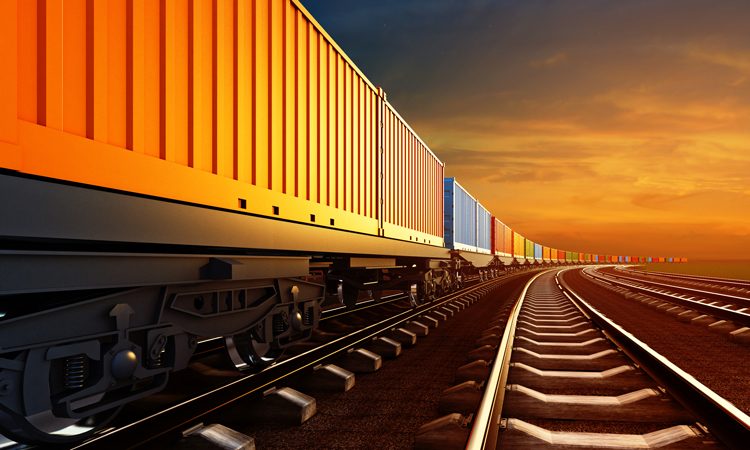 The heavy-haul network in China is expanding fast. With total mileage of 653km the Datong– Qinhuangdao (Daqin) coal line is the major corridor for transporting coal from the west (Shanxi and Shaanxi provinces and the Inner Mongolian Autonomous Region) to the east (Qinhuangdao, China’s largest coal-exporting seaport). 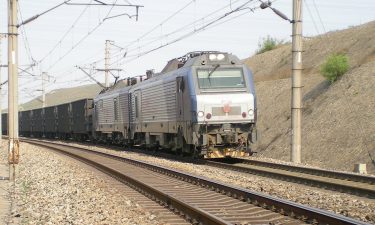 This double-track electrified line with an axle load of 25 tonnes, opened in December 1992 capable of transporting a total volume of 450MGT/year. To ensure these high numbers could be achieved, a wider than normal subgrade was used as well as stronger rails (75kg/m). The technology meets international standards: It was China’s first heavy-haul railway to use a micro-computerised centralised traffic control system and the first line in the country to use an optical fibre communication system. Drawing on the breakthroughs achieved on this line, China was able to make substantial progress in heavy-haul railway transportation.

With its demanding high frequency, the route’s freight operators require highly durable superstructure as damage to the components and increased wear will only reduce availability of the route, increase the maintenance requirements and drive up operating costs.

Destruction of ballast is common on heavy-haul freight lines due to the heavy loads that operate on them. This causes damage to many essential superstructure components such as breakage of rail clips and sleepers, as displayed in Figure 3. If the ballast remains intact, the high quality of the entire system is preserved and superstructure components such as rails and sleepers are subjected to less stress.

Along the Daqin coal line, two sections were selected and in 2016 the Taiyuan Railway Bureau applied polyurethane USPs to both tracks (loaded and unloaded directions). The loaded, padded section has a total length of 1.46km at the mileage of km 296+700 ~ km 298+160. The section is in a 12‰ gradient, a curve of R=700m L= 760.49m, three bridges (total length 375.9m) and three tunnels (total length 277m). To see the benefits of the elastic superstructure, this track sequence with frequent changes of subgrade (open track/tunnels/bridges) was predetermined. For this test site, the elasto-plastic SLB2210G and the slightly higher elastic SLB1510G USP types were selected according to the conditions.

Figure 4: Measurements of car data, standard deviation of the longitudinal rail level of the unloaded track, equipped with USPs between 283,700km and 285,000km

Durable elasticity for superstructure: No damages or maintenance 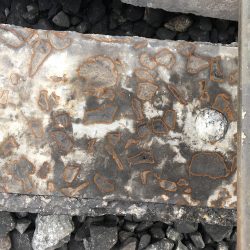 Figure 5: A turned-over padded sleeper shows the large contact area with imprints of the ballast

Fourteen months after the installation, the total tonnage was accumulated to 519MGT. Within this time the unpadded section had been tamped twice with major maintenance undertakings, whilst the padded section showed no need of tamping or maintenance1. Apart from this, no other defects such as the breakage of sleepers or rail clips, white spots or hanging sleepers could be found within the padded section. The track quality and geometry were kept at a high level. These findings are proven by the regular measurements of car data as shown in Figure 4. The rail joints have not been optimised, but even in these hotspots the deterioration rate tends to be much smaller compared to the unpadded adjacent ones. 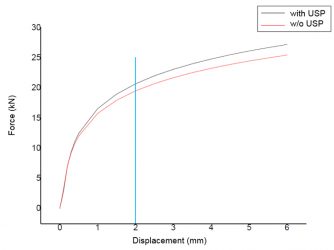 Next to this continuously taken track data, the Beijing Jiaotong University conducted in-track measurements and checked the superstructure components2. The overall track quality was stated as ‘good’ (even after two years) and no defects of sleepers, rail clips, ballast or other track components could be found. 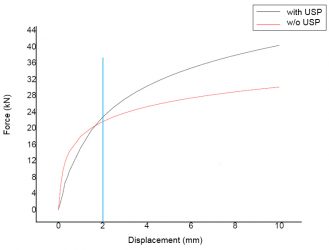 This embedment of the ballast within the USP has a positive influence on the lateral track stability, especially so for areas with costly wider subgrades as a better track stability is essential. To quantify this stability, the lateral track resistance and the longitudinal track resistance are decisive. For this measurement, single sleepers were separated from the rail and pushed sideward (or in the direction of the track) whilst the required force and movement is captured. For an easier comparison, the values of the force required for a two-millimetre displacement of the sleepers was compared. In this measurement, the use of USPs could improve the lateral track stability by six per cent, as illustrated in Figure 6 and the longitudinal resistance by five per cent, as in Figure 7. These values are comparable to other test tracks in heavy-haul applications but are mostly outbid.

With the installation of polyurethane USPs of types SLB2210G and SLB1510G on the Daqin coal line, maintenance activity was dramatically reduced. This saves money and significantly increases the track availability. Until today the padded track needed no tamping with USPs (compared to four times without), even after more than 800MGT. Track measurements which were carried out by the Beijing Jiaotong University showed the benefits of the elastic bedding for track stability. Resistance values could be increased by five per cent (laterally) and six per cent (longitudinally). The use of USPs in the track superstructure enables the operation of a durable low life-cycle cost track system for China’s heavy-haul network.

Statement from Mr. Quanxian Wang, Senior Engineer of the Taiyuan Railway Bureau: “By conducting comprehensive statistics and analyses to the track geometry, maintenance costs were reduced and positive effects arose since the application of Getzner USPs. The track elasticity has increased, which has effectively lowered the impact force from passing trains to the rails, sleepers and ballast bed, proving the ballast is properly protected. Track geometry is maintained and the quality has improved”1.

Dong Huiding graduated from Beijing Jiaotong University and acquired a Master’s degree in Civil Engineering in 2006. He worked for a sleeper manufacturer before joining Getzner China in 2013 as Railway Project Manager engaged in the elasticity of railway superstructure such as USP technology application in Chinese heavy-haul railways. He accompanied the field tests of both static and dynamic measurements of the ShiTai line and the Daqin coal line with padded sleepers.

Harald Loy is Head of R&D in the Railway Division at Getzner. He graduated from the Technical University of Munich in Civil Engineering and holds a doctoral degree in Railway Engineering from the University of Innsbruck. After being employed in the computer industry, he investigated in simulation laboratory testing and in-situ measurements of elastic track applications. Harald is the author of over 30 papers, patents of inventions and technical notes published in national and international journals. Furthermore, Harald works as a Postdoctoral Researcher at the Intelligent Transport Systems Unit within the University of Innsbruck.

One response to “Heavy-haul in China: Investigating durable elasticity for superstructure”