Passengers are being encouraged to ‘Sip, Save and Recycle’ in a bid to make stations greener. 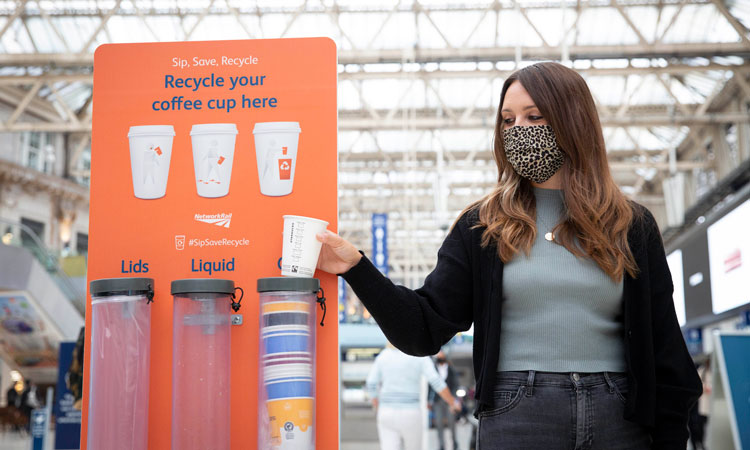 Network Rail is introducing coffee cup recycling bins in some of Britain’s biggest and busiest rail stations. King’s Cross, Leeds, London Bridge, Waterloo, Liverpool Street, Charing Cross and Cannon Street will be the first to have the new bins installed.

Passengers travelling by train or visiting the stations can make use of the bright orange bins to recycle any paper coffee cups purchased during their journey. The cups go on to be turned into upcycled reusable cups and other products, including tissue and packaging, as part of Network Rail’s initiative to make stations cleaner and greener.

The rollout comes as a new YouGov study commissioned by Network Rail revealed that consumers want to recycle cups but often do not know how. The poll showed that less than a third of Brits who buy coffee while travelling recycle their cup properly, using a recycling bin specifically for paper cups. Furthermore, the data revealed that 23 per cent of those who use a general recycling bin did not realise that these are actually unable to manage paper cups.

Gavin Ellis, Director and Co-Founder of Hubbub, explained: “Cups can be easily recycled but, because they have a plastic lining that stops hot drinks from leaking, they need to be collected separately from other recycling. There is now plenty of capacity to recycle cups in the UK; what is needed is more infrastructure to collect the cups in high footfall places, so train stations are the ideal location.”

Of those who don’t tend to recycle paper cups, just over half say it’s because there isn’t anywhere available for them to do so throughout their journey, while 21 per cent feel that public recycling facilities are inadequate.

“By installing accessible, easy-to-use cup recycling bins across our managed station network this year, we’re helping our passengers to reduce their waste with a simple message – ‘Sip, Save and Recycle’,” commented Network Rail’s Chief Environment and Sustainability Officer, Jo Lewington. “We believe the initiative will go a long way to supporting the circular economy and making our stations more sustainable.”