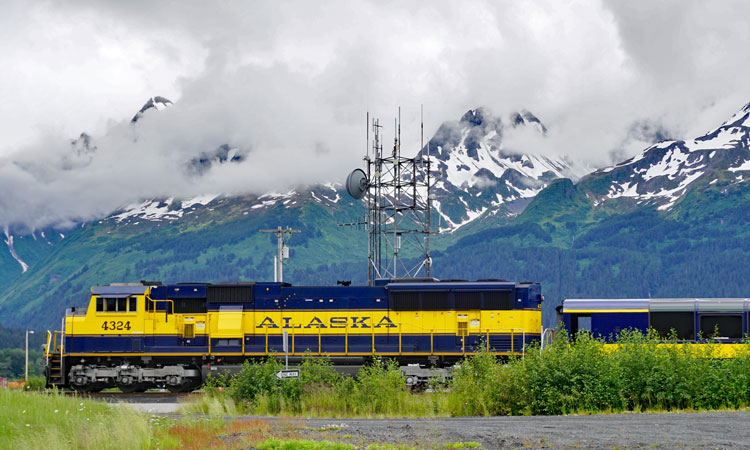 The U.S. Department of Transportation’s Federal Railroad Administration (FRA) has selected five projects in two states to receive more than $6.9 million in Special Transportation Circumstances (STC) Grants made available by the Consolidated Appropriations Acts of 2019 and 2020. This includes more than $1.2 million directed grant funding for two projects in Alaska, and $5,670,000 in directed grant funding for three projects in South Dakota.

The following projects were selected in Alaska:

The proposed rural rail project will procure, install, and put into service one wheel impact load detector on the northern portion of the Alaska Railroad Corporation (ARRC) rail system near Anderson, Alaska. The wheel impact load detector system continuously monitors rail vehicle wheel health by measuring vertical wheel forces via rail-mounted strain gauges, and then alerts maintenance personnel to high-impact forces caused by damaged wheels. These forces can further damage vehicles, cargo, and rail infrastructure. ARRC currently has this wheel performance management system in its southern region at milepost 121.3. This installment will allow ARRC to similarly monitor and collect data on trains that travel in the northern portion of the rail line.

The proposed rural rail project will upgrade an existing intermediate control signal to a complete control point at ARRC milepost 158.9 in Wasilla, Alaska, to halve a 13-mile gap in control points. Having a control point at this location will allow ARRC dispatch more operational options to keep passenger and freight trains moving while allowing maintenance-of-way work to continue with fewer disruptions since potential stoppages will impact a shorter section of track.

The following projects were selected in South Dakota:

This proposed rural Brule County freight rail capital project will construct a new, approximately 10,000ft rail siding east of Highway 45 near the Gavilon grain elevator on the Dakota Southern Railway mainline east of Kimball, South Dakota. The siding increases capacity and decreases delays. The siding will be located on property half of which is currently owned by the State. The other half of the project right-of-way will be acquired with funding outside of this grant. The grantee will clarify how this acquisition will be accomplished prior to grant obligation.

The Fixing America’s Surface Transportation (FAST) Act authorised the STC Grants, which provide directed grant funding appropriated for the Consolidated Rail Infrastructure and Safety Improvements (CRISI) Program and the Restoration and Enhancement (R&E) Grant Program for rail capital projects. The projects are specific to certain States that lack intercity passenger rail service or are not connected to the national rail system.

On 8 May 2020, the FRA announced in the Federal Register the STC Grants Notice of Funding Opportunity (NOFO). This NOFO made available directed funding for eligible rail capital projects, as follows: $1,242,600 for Alaska from the 2020 Appropriation and $5,671,974 for South Dakota from the 2019 and 2020 Appropriations.

The project eligibility requirements for the STC Grants are state-specific. For Alaska, an STC project must be a freight or passenger rail-related capital project. For South Dakota, eligible STC projects must be freight rail capital projects that are on a State rail plan developed under Chapter 227 and that provide public benefits as defined in 49 U.S.C. 22701(2).

Federal funding awarded for STC Grants must not exceed 80 per cent of the total project cost. The required 20 per cent non-Federal share may comprise public sector – State or local – or private sector funding, or both.