Dubbed ‘The Stegosaurus’ due to its striking profile, the roll-out of the MK2 prototype has now been given the green light and a further 29 wagons will be converted during 2021. 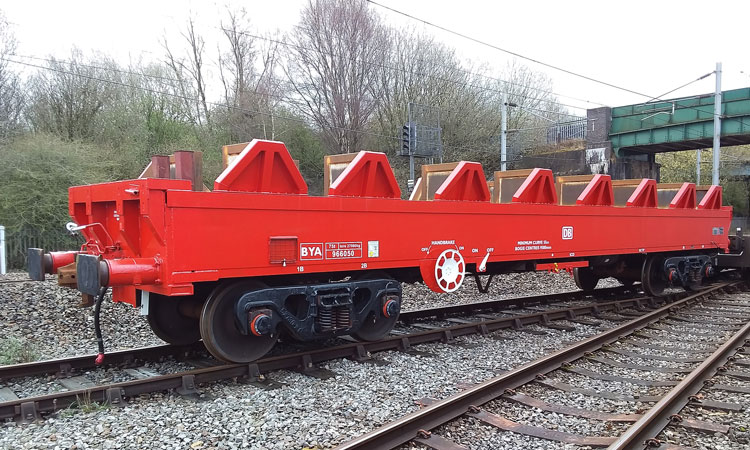 The company is breathing new life into 29 old and redundant BYA wagons after successfully trialling a number of prototypes with its customer Tata Steel.
Tata Steel has recently seen an increase in demand for open hot coil wagons, so DB Cargo UK set about exploring ways to optimise its existing fleet of covered wagons to ensure it could continue to fulfil its customer’s requirements.

The challenge was given to DB’s cross-business Wagon Innovation Group which came up with the concept of removing the doors from the BYA wagons and adapting the coil beds inside.

The MK1 prototype which was completed in early-2020, was sent for live testing with Tata Steel, receiving only mixed reviews.

To obtain a greater understanding of Tata’s needs, DB’s Sales and Production teams spent time discussing the design with Tata and fed back some of their queries and additional requirements to its Group Technical Services (GTS) Team. Armed with this feedback, GTS went back to the design board and the MK2 was developed.

For the new modular type set-up, the wagon ends were fully removed to give better access for cranes during loading. Robust dividers were also added into the well of the wagon, giving secure pockets for various sizes of coil dependent on what the customer was transporting.

Obsolete items were also removed from the wagon to maintain the tare weight and keep payloads at previous levels.

Along with this more in-depth transition to flexible coil transport, GTS also designed a set of dividers which could be swapped into the vehicles to allow the transport of steel slab.

The ability to utilise the same wagons on either open coil or slab traffic would have the benefit of increasing utilisation of the asset while reducing the reliance on older, life-expired steel wagons, as the BYAs were also some 30 years younger than the current open fleet.

The wagon – BYA 966050 – was returned to Stoke for rework which was completed to coil specification in April 2021. The wagon is now out in traffic with Tata and has received very positive feedback.

A full roll-out of the MK2 prototype has now been given the green light and Stoke will convert a further 29 wagons during 2021 with the ability to have either coil or slab spec as required.

Mike Richards, Depot Manager at Stoke, said: “The team at Stoke is very proud of the MK2 prototype and has nicknamed it the Stegosaurus due to the side-on profile. We worked closely with our colleagues in the GTS Team along with Procurement for the new modular items to enable significant improvements over the MK1 offering.”

The production line to convert all 29 wagons has now been established, with a number of additional staff recruited to fulfil the conversion.

Mike added: “Asset optimisation is a key strand of DB Cargo UK’s new strategy and this project demonstrates clearly that innovation and a determination to deliver for our customers is alive and well in our business.”