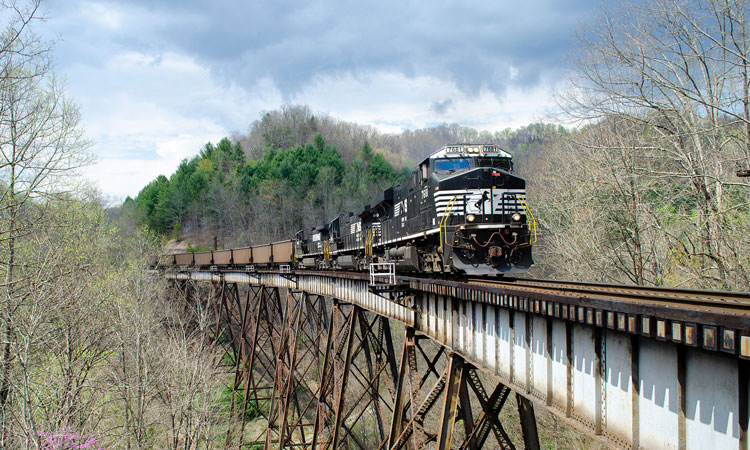 In 2020, Norfolk Southern became industry-leading with its sustainability efforts, as the company excelled as the first major North American railroad to issue green bonds. Norfolk Southern invested $500 million in eligible green projects that address climate change. Furthermore, the company also established a science-based target for a 42 per cent reduction in greenhouse gas emissions intensity. A target that aims to be as consistent as the Paris Agreement on climate change.

“From environmental stewardship to the safety and development of our entire team, we are in the business of a better planet, committed to bold leadership and deliberate action.”

In 2015, Norfolk Southern set a goal to improve fuel efficiency by 8.6 per cent by 2020. The company exceeded this goal in 2020, with a 9.4 per cent fuel improvement. As a result, this saved more than 130 million gallons of diesel fuel and avoided 1.3 million metric tonnes of emissions.

Furthermore, the company nearly doubled renewable energy usage to 18 per cent in deregulated markets as of 1 May 2021. Due to this success, Norfolk Southern established a new goal of using 30 per cent clean energy by 2030.

Josh Ralin, Norfolk Southern’s Chief Sustainability Officer commented: “We’re focused on driving change, being proactive, and managing for results. We’re going to continue looking for ways to drive efficiency in our business and lower our environmental impacts. It’s really about being the best steward that we can be of our assets, contributing to a better planet, and adding value for our stakeholders.”

Norfolk Southern also accomplished numerous other sustainable successes including: diverting 81 per cent of waste from landfills, minimising RCRA Hazardous Waste to 0.03 per cent of total waste generated, as well as, reclaiming over 6,200 tonnes of used oil. Along with remarkable recycling efforts and attainments such as: 100 per cent of old crossties and more than 90 per cent of steel used, and all 400 miles of rail replaced each year.

In addition to Norfolk Southern’s environmental support, the company has also had a large impact on the developments to the U.S. economy. During 2021, Norfolk Southern carried over 274,900 tonnes of asphalt shingles, 3.9 million tonnes of lumber, and 312,500 tonnes of drywall sheets, which is enough supply to roof, frame, and drywall 120,000 to 160,000 average single-family homes. The company moved more than 10.2 billion pounds of grain that poultry producers used as feedstock to raise 1.7 billion chickens and turkeys to help feed America. Finally, Norfolk Southern helped to create nearly 3,000 new customer service jobs.