HS2 Ltd has announced that over 20,000 people are now working on Britain’s high-speed rail project, one year on from the formal start of construction on Phase One from London to the West Midlands. 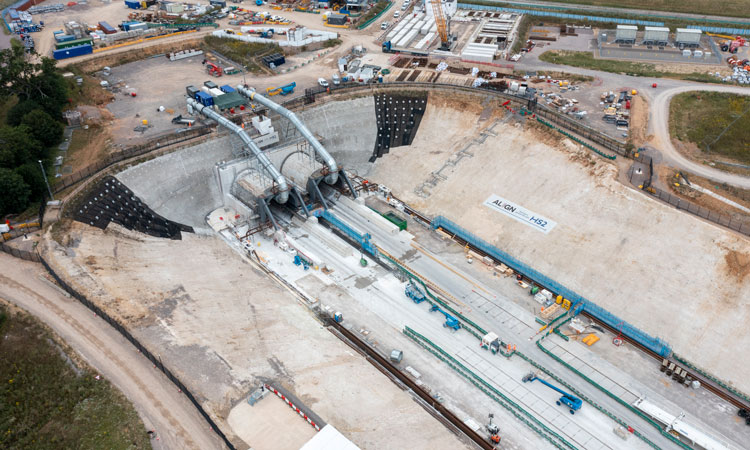 Aerial view of entrance to the HS2 Chiltern Tunnel at its South Portal in Hertfordshire (August 2021). Credit: HS2

Today (13 September 2021) marks one year since Prime Minister Boris Johnson visited the Interchange station site in Solihull to announce the formal start of construction on the London to Birmingham phase of the HS2 project.

The latest employment figures demonstrate the crucial role that HS2 is playing in the UK’s economic recovery, with work having continued throughout the COVID-19 pandemic. Companies right across the country are now forming part of HS2’s ever-growing supply chain. Contracts have already been awarded to over 2,200 businesses, 97 per cent of which are UK-based. A further £25 billion worth of opportunities are expected to flow out into the wider supply chain over the coming years.

Transport Secretary Grant Shapps MP, said: “While there have been some issues with the project in the past, hitting the landmark of 20,000 jobs underlines the unstoppable momentum HS2 now has. It’s been an incredible year of progress as work continues across the country to deliver a new backbone of Britain’s transport network, fit for the 21st century and beyond. Reaching this landmark is testament to the hard work and dedication of all those involved in the project.”

By providing work for tens of thousands of people in the UK right now, HS2 is helping the country to build back better after COVID-19, as part of the government’s Plan for Jobs.

HS2’s jobs boost is also benefitting those in need, with bespoke initiatives designed to upskill local people who are out of work with the training and accreditation they need to secure a job on HS2. Over 1,000 individuals who were formerly unemployed have now secured sustainable employment on HS2, and that number is expected to increase in the months and years ahead as the pace of major construction work increases and HS2’s journey extends north.

“We’re enormously proud of the progress we’ve made on HS2 since the Prime Minister gave us the go-ahead last year, and despite the challenges of the pandemic,” explained Mark Thurston, Chief Executive of HS2 Ltd. “We’ve already launched our first two tunnelling machines, with more to launch in the coming months, and construction of our stations and depots are well underway. HS2 is moving forward, creating jobs, enhancing skills, benefiting UK businesses and building a low carbon, high capacity railway that will change the way we travel in Britain.”

Darren Caplan, Chief Executive of the Railway Industry Association (RIA), commented: “It’s great to see so much having been achieved in only one year of HS2 construction, with the tunnel boring machines now working to connect London and Birmingham, and station sites being prepared all along the route. Congratulations to everyone involved, including HS2 Ltd and also the UK’s world-class rail supply sector involved in the scheme, on reaching this project milestone.”

Darren continued: “HS2 is now supporting 20,000 jobs, and the project is truly showing itself as a vital investment for the UK economy, at such an important time when the Government is seeking to build back better post-Coronavirus. The widest benefits of HS2 will only be realised if the scheme is delivered in full. So now let’s get on with delivering the Eastern Leg too, so the whole of HS2 can be built, and the strongest levels of economic growth, jobs and investment unleashed both now and in the future.”

Some highlights of project milestones over the past year, include: