The CHSRA has announced that the South Avenue Grade Separation in Fresno County has been completed and is now open to traffic, marking another milestone on the high-speed rail construction project. 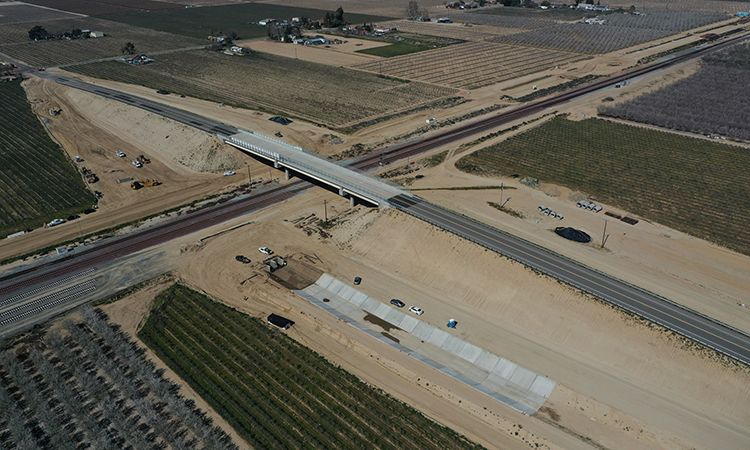 The California High-Speed Rail Authority (Authority) has announced that it has completed another structure on the nation’s first high-speed rail system. The South Avenue Grade Separation in Fresno County is now open to traffic, adding to the continued progress along the 65-mile segment known as Construction Package (CP) 2-3 in Fresno, Kings and Tulare counties.

The South Avenue Grade Separation, located between Cedar and Maple Avenues, is one of 36 grade separations being built in CP 2-3 to improve safety along the high-speed rail alignment, with the Authority anticipating that it will complete several additional structures throughout the rest of the year.

Grade separations provide major safety improvements, especially in rural areas that include Fresno County, by realigning roadways over or under a railway to eliminate potential safety hazards at intersections. In addition to improving safety, grade separations reduce noise from train horns and decrease traffic congestion.

“The completion of the South Avenue Grade Separation is another example of significant progress for California’s high-speed rail project and a testament to our efforts to deliver a safe and sustainable transportation project for the next generation,” Garth Fernandez, Central Valley Regional Director for Authority, said. “With more than a dozen completed structures across all 119 miles of construction, we continue to make daily progress in building high-speed rail.”

The South Avenue Grade Separation will ensure enhanced east-to-west mobility and safety for the travelling public while reducing the harmful greenhouse gas emissions from idling cars that would typically wait at the railroad tracks.