Network Rail will invest an extra £2 million into the railway line when it reopens to further improve its resilience after recent storm damage. 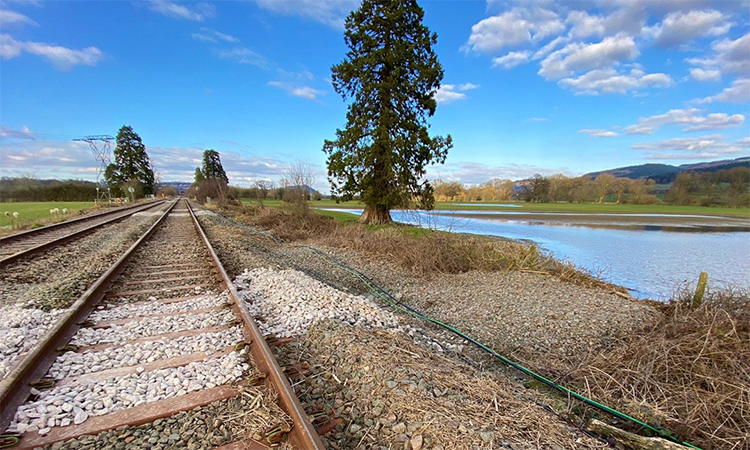 Network Rail has announced a multi-million-pound investment to help protect the railway from extreme flooding and passenger disruption. The Cambrian Line is planned to reopen by the first week of April, after three major storms in the space of a week forced its closure in February. Storms Dudley, Eunice and Franklin caused severe damage across Wales. On the railway, a section of the Cambrian Line, near Welshpool, which was hit hardest, with 33 track washouts over a half mile stretch of the railway. The flooding left gaping holes beneath the tracks, which Network Rail engineers have been working hard to repair, so trains can safely run again.

Meanwhile, Network Rail has announced an additional £2 million emergency funding to protect this section of the railway from extreme weather events in the future. Over the next few weeks, as well as repairing damage from the washouts, engineers will install more than 5,000 tonnes of rock armour on the embankment, alongside the railway. Before the rock armour can be installed, more than 10,000 tonnes of materials will need to be transported to site to build a temporary 700-metre-long access road.

Rock armour has been successfully deployed to combat flooding in other areas including the Conwy Valley Line and the Marches Line, near Abergavenny. When the railway floods, the rock armour acts as a barrier to stop the ballast (stones that hold the sleepers in place) from being washed away by reducing the speed of the water and restricting its flow. Protecting the railway in this way allows lines to be reopened far more quickly after major flooding events.

To reduce the impact on passengers, the resilience work has been fast-tracked to take place alongside the storm repairs, while the railway is already closed. Other work being carried out over the next few weeks includes refurbishing culverts (the drainage beneath the tracks), renewing the tracks and planting additional hedgerows where there are gaps along the railway, which help protect the tracks from flooding and provides a perfect habitat for nesting birds and small mammals.

“Climate change is happening here and now so building a more resilient railway for Wales & Borders is a top priority,” Bill Kelly, Wales & Borders Route Director at Network Rail said. “We know the Cambrian Line is a social and economic lifeline for the communities it serves. Building on our work to raise black bridge near Machynlleth and our £30m investment at Barmouth Viaduct, we are committed to protecting the future of this vital transport link.”

“We welcome Network Rail’s announcement of additional funding to enhance protection for the Cambrian Line,” Jan Chaudhry-Van der Velde, Managing Director of Transport for Wales, said. “We understand disruption caused by storm damage, although beyond our control, is incredibly frustrating for our customers so we are grateful to Network Rail for completing this repair work as quickly as possible and for carrying out further work to protect the line in the future.“