Towns and cities across the country have shown overwhelming interest in becoming the new home for Great British Railways. 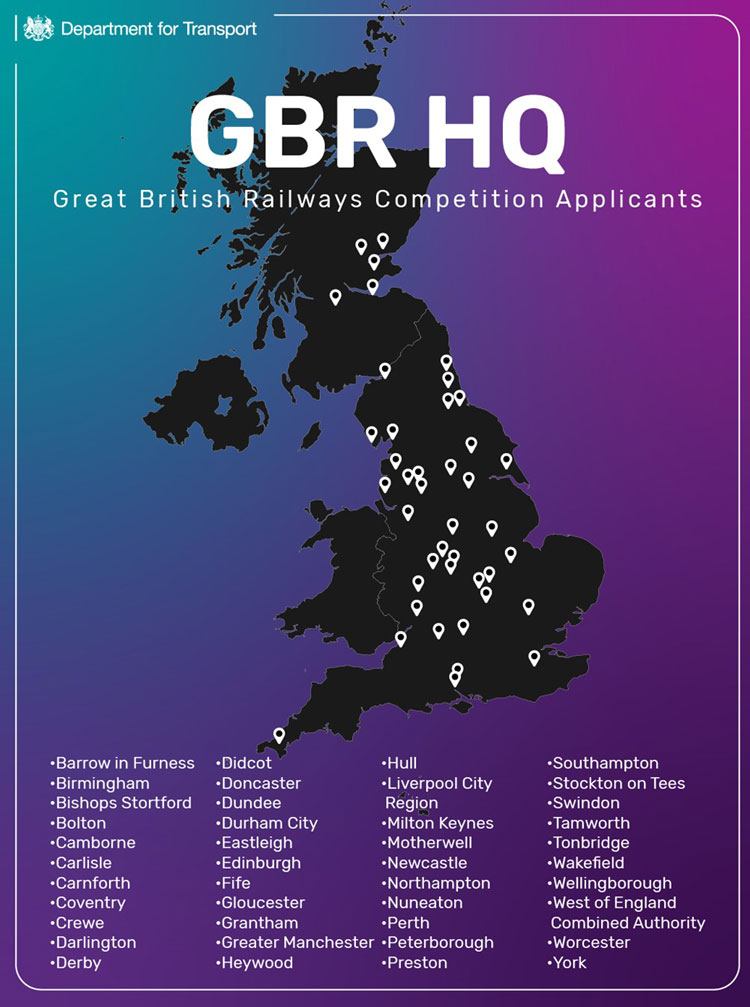 Towns and cities across the country have thrown their hat into the ring to become the new home of Great British Railways. The deadline for expressions of interest passed on Wednesday 16 March 2022, with applications received from the north, south, east and west of the country.

In February 2022, locations across the country with strong historical links to the railway were encouraged to make the case for why they should be the new home of GBR. The response has been extremely positive, with 42 towns and cities spread across the nations and regions expressing their interest.

The Great British Railways Transition Team, which is leading the design of the future GBR, will now review each expression of interest as part of a rigorous assessment process before publishing a shortlist in May. The public will then have their say with an online vote forming part of the criteria to help identify the new home for Great British Railways. The winner will be revealed this summer.

“It is brilliant to see so many places across the country come forward to be the new home of Great British Railways,” Grant Shapps, Transport Secretary, said. “All the entries show just how proud we should be as a nation of our long railway history. Now it is full steam ahead with building a short list for the public vote, as we unlock all the energy and enthusiasm British people have for trains, to find the home of GBR.”

The new GBR Headquarters will be based outside of London and bring a number of high-skilled jobs to the winning location. Local economies will be further boosted by a number of new regional GBR headquarters across the country, putting decision-making and investment at the heart of the communities that use those railways day-to-day.

The creation of GBR was announced as a major pillar of the once-in-a-generation reforms. GBR will be a single guiding mind that ends the fragmentation of the rail industry and drives benefits and improvements across the network for passengers and freight customers.

“We are going to make the railway simpler and better for everyone in Great Britain and to do that we must get closer to the communities we serve,” Andrew Haines, Leader of Great British Railways Transition Team, said. “This competition has clearly captured the imagination of people across the country who have a passion for the role trains play in their area. I’m excited to see what each town and city can bring as the HQ of GBR.”

Applications will be measured against the following six criteria, alignment to levelling up objectives, connected and easy to get to, opportunities for GBR, railway heritage and links to the network, value for money and public support.