Network Rail have announced the opening of the Midlands’ newest and longest railway bridge after the first freight train passed over the structure. 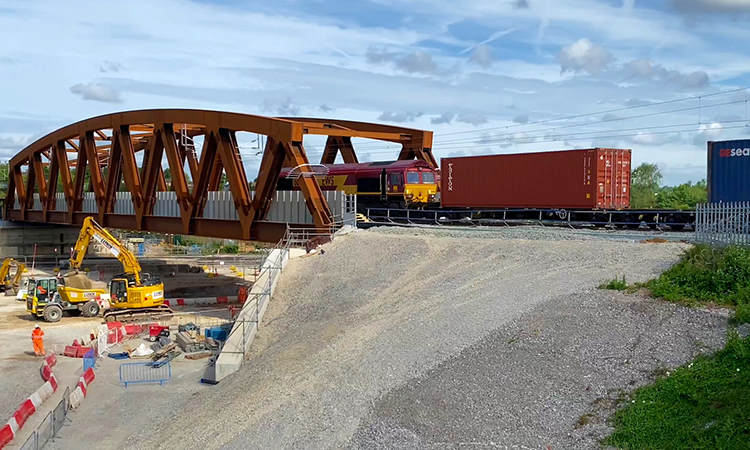 Network Rail have announced that the Midlands’ newest and longest railway bridge is now fully functional after carrying its first freight train. The tracks reopened on 23 May 2022, on the Stechford to Aston freight line in Birmingham, following the installation of a massive 2,600-tonne bridge built by Network Rail in partnership with HS2 (see the bottom of the page for a time lapse of the installation).

At 92 metres long, the steel and concrete structure becomes the longest single span railway bridge in the Midlands. It needs that clearance underneath so future tracks for Britain’s new zero-carbon railway can be built below for HS2 trains to access its Washwood Heath depot. The demolition of the old railway viaduct and installation of the new bridge has closed this connection to Birmingham rail freight terminal for 23 days. However, the first train has now passed over the new structure (see the moment in the video below), reopening the important rail freight route and marking a huge milestone for project contractor Skanska.

“Seeing the first train pass over this iconic structure is a proud moment for the hundreds of people who’ve worked throughout the pandemic to make this new bridge a reality,” Patrick Cawley, Director for ‘On Network Works’ for Network Rail and HS2, said. “It is also a key part of the jigsaw to ensure the existing railway network works in harmony with HS2.”

Building and installing the bridge, known as SAS 13, involved precision planning and engineering and the use of some heavy-duty equipment. The structure was driven into place by remote-controlled vehicles after being pre-assembled on site in a civil engineering project which has taken over two years. Building it on site reduced carbon emissions and cut the number of lorry movements on local roads, minimising impacts on the local community. A time lapse of the assembly is below.

“Installing a railway bridge over an existing railway line is a complex engineering project that requires a huge amount of skill and dedication from all those involved,” Rosario Barcena, Programme Director for Skanska Rail, said. “To have delivered this on time and despite of Covid-19 restrictions is a fantastic achievement and testament to the team involved.”

A time lapse of the installation is below.