Amtrak have released its FY21 Sustainability report to detail their progress against annual and long-term sustainability goals. 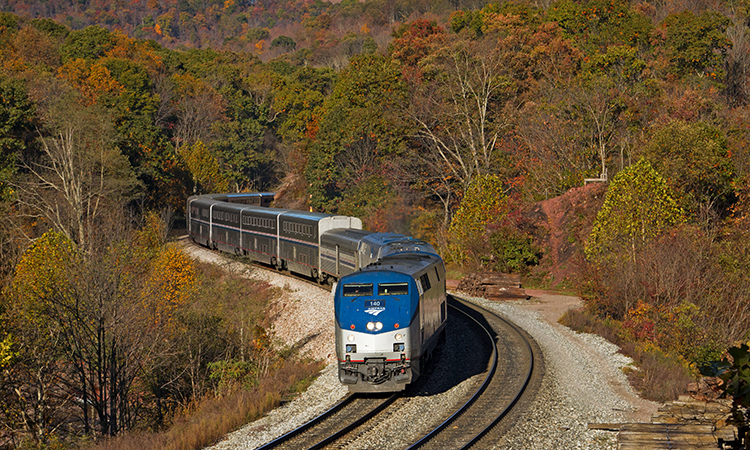 Amtrak has released its FY21 sustainability report that showcases sustainability projects across Amtrak’s regions and operations. Throughout the report are details of Amtrak’s measured progress against annual and long-term sustainability goals that encompass greenhouse gas emissions, diesel fuel and electricity usage.

“Driving sustainability at Amtrak means transforming the customer experience, reducing our carbon footprint and expanding service to new markets across America,” Stephen Gardner, CEO at Amtrak, said. “Recognising the urgency to act now, Amtrak is out to change the way our country moves.”

Intercity travel on Amtrak is cleaner and more sustainable than most alternatives. On average, an Amtrak service is 46 per cent more energy efficient than car travel and 34 per cent more efficient than domestic air travel. On the electrified Northeast Corridor, Amtrak travel emits up to 83 per cent less greenhouse gas emissions compared to car travel and up to 72 per cent less greenhouse gas emissions than flying. The fully electrified service also provides the environmental benefit of zero tail pipe emissions which improves air quality in the dense urban areas.

Highlights from the report include:

Cleaner, more climate-friendly equipment – A significant share of Amtrak’s Infrastructure Investment and Jobs Act (IIJA)-provided funding supports the procurement of new train equipment. On the NEC and various State-Supported routes, this equipment will include new trainsets, including some dual-power equipment that can run on electric or diesel and other dual-power equipment that can run on battery or diesel. On Long-Distance routes, IIJA funds will support the continued procurement of fuel-efficient, Tier 4-compliant ALC-42 locomotives, which emit 89 per cent less nitrogen oxide and 95 per cent less particulate matter than the diesels that they are replacing.

Expansion of energy-efficient passenger rail service – Large increases in population and travel demand, demographic shifts, congestion and changing travel preferences mean that Amtrak’s legacy route network does not fully meet the changing needs of the traveling public. For example, Texas and Florida, the nation’s second and third most populous states, have a combined population of just over 50 million, but those two states are served by just six Amtrak routes, some of which do not operate every day. In FY21, Amtrak released a corridor vision called Amtrak Connects US, to develop and expand intercity passenger rail corridors. Providing intercity passenger rail service to the 50 largest metropolitan areas, Amtrak’s vision aims to add service to 160 new communities, create 39 new routes and enhance 25 routes. A historic investment in expanding passenger rail, IIJA funding signifies the important role trains play in the future of sustainable transportation.

Improved capacity, reliability, and performance on existing routes – Guided by the Northeast Corridor Commission’s Connect NEC 2035 service development plan, the IIJA investments will make the Western Hemisphere’s busiest, highest-speed rail corridor an even more efficient, effective and resilient mode of transportation, taking countless cars off the road, driving down carbon emissions and showing what sustained, robust funding for rail could achieve in other parts of the country.

Acela solar-powered gates – In 2021, Amtrak designed and deployed innovative, solar powered technology to improve security on the Northeast Corridor (NEC) Right of Way (ROW), prior to the upcoming launch of the historic new Acela service, advancing safety and sustainability together.

“Providing high-quality, low-carbon rail service that takes people out of cars and planes is one of the most efficient ways to drive emissions reductions,” Dennis Newman, Executive Vice President of Strategy, Planning & Accessibility at Amtrak, said. “Through more and better service, we will give additional people a chance to pitch-in and fight the climate crisis by choosing rail.”