Following severe storms and flooding in early 2022, Network Rail and partners have successfully completed an extreme weather resilience project to minimise future delays and disruption on the Cambrian Line in Wales.

A multi-million-pound resilience project has been successfully delivered on the Cambrian Line in Wales, making passengers’ journeys more reliable in future.

A trio of storms in February 2022 forced the railway between Welshpool and Newtown to close for six weeks while engineers from Network Rail and AmcoGiffen worked around the clock to fix over a dozen washouts caused by unprecedented levels of flood water.

To minimise future delays and disruption, Network Rail quickly got to work installing 10,000 tonnes of rock armour along the bank of a-half-mile stretch of the Cambrian Railway line. The tried and tested extreme weather-buffer had already proved to be a huge success to reduce flooding in other parts of Wales – on the Conwy Valley and near Abergavenny.

Rock armour prevents the ballast – the bed of stones beneath the sleepers – from washing away during extreme storms. It has proven effective in other parts of the railway, such as the flood-prone section of the Conwy Valley railway and near Abergavenny. It means that the recovery of the railway following a harsh storm can take days, rather than weeks or months.

The railway remained open to full service during the resilience upgrades at Welshpool – which involved the installation of locally sourced stone from Cefn Mawr quarry, in Flintshire.

Network Rail is returning, in Autumn 2022, to plant short hedgerows in the gaps along the railway boundary, which will not only help in slowing flood waters in future, but also provide a continuation to nature’s corridors in the area. 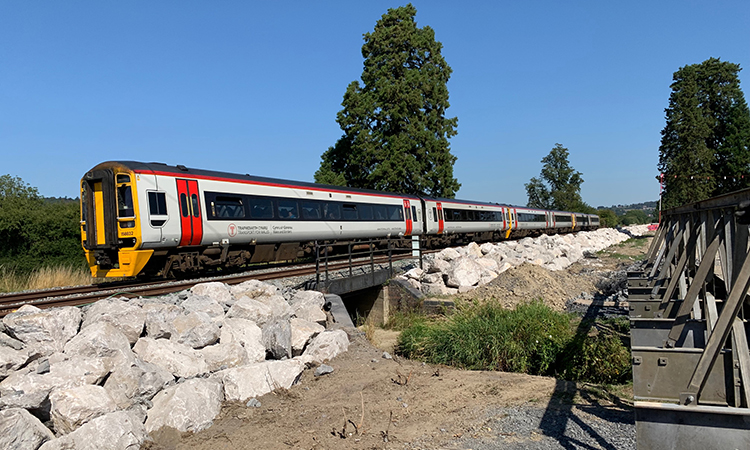 Nick Millington, Interim Route Director at Network Rail Wales and Borders, said: “It’s hard to remember how devastating those February storms were, after the record-breaking temperatures [in Summer 2022], but we’re always planning ahead to the next extreme weather event, making sure we are prioritising investments that will make our railway more resilient.”

“The Cambrian Line is a hugely important rail link for the communities it serves, and I am delighted that it’s now better protected from the impacts of climate change so that we can continue to provide a safe and reliable railway for many years to come,” he added.

Chris Howchin, Programme Manager at Network Rail Wales and Borders, said: “I would like to say a huge thank you to our teams at Network Rail and AmcoGiffen who’ve worked tirelessly in recent months to not only to repair the line, but to make it more resilient, which will help prevent long delays and disruption for passengers in future.”

Howchin continued: “I would like to thank passengers and the communities that we serve along the line for their patience as this significant investment was delivered.”

Colin Lea, Transport for Wales’ (TfW) Planning and Performance Director, said: “We welcome this investment by Network Rail in making the Cambrian Line safer and more resilient. The work to prevent damage and disruption from flooding will help to secure the future of this important route, which provides a vital link for communities in north and mid-Wales. We would like to thank the teams who have been working around the clock on site over recent weeks in difficult conditions.”