ABB have signed a new contract for a 25kV power solution that will help Lithuania electrify over a third of its rail network by 2030. 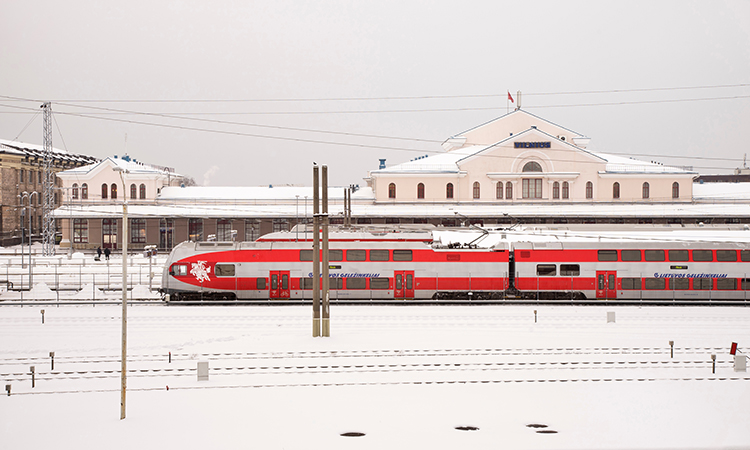 ABB has built upon on its track-record in sustainable rail innovation with a new contract for a 25kV power solution to electrify a 100 per cent carbon-neutral rail line for Lithuanian Railways. The landmark project represents the first deployment of ABB’s traction switchgear technology in Lithuania and ABB’s largest-ever 25kV rail electrification order in the European Union (EU) to date.

The Vilnius–Klaipeda rail contract, which is being partly-funded by the EU Cohesion Fund, forms part of a strategic focus to electrify 39 per cent of Lithuania’s total rail network by 2030, a figure which currently stands at 8 per cent. This will ensure greater interoperability with the wider EU rail network where overall electrification is estimated at 56 per cent. It will cover 730km (in overall length) of railway track and will complete the electrification of the busy corridor between the capital Vilnius and the seaport of Klaipėda. On completion, it is estimated that the rail line will be used by over three-quarters of all cargo and two-thirds of railways passengers in Lithuania and that the increased competitiveness of the railway operation, reduced costs and the economic benefits of reduced pollution could amount to as much as €1 billion in overall cost savings for Lithuania.

As part of the project, which is being delivered via a joint venture partnership between Elecnor and Inabensa, ABB will design and supply 25kV equipment packages for eight 230/25 kilovolt (kV) traction substations, eight autotransformer stations and three sectioning posts.

For a reliable and safe power supply, ABB will install its railway ZX1.5-R medium voltage gas insulated switchgear (GIS) which has been specifically designed for railway applications. The modular technology uses 70 per cent less space than other conventional products. It is also easy to install with no gas handling on site and features a ‘sealed for life’ installation panel for minimum maintenance, leading to reductions in total investment and operational costs.

ABB will also custom-build six variations of its Structure Mounted Outdoor Switchgear (SMOS) which integrates all the elements needed to safely protect and operate the supply sections of the overhead line. Designed to meet the unique requirements of outdoor rail applications, ABB’s robust, modular SMOS range is built to withstand arduous conditions while being easy scaled to facilitate narrow, restrictive environments. SMOS are assembled and pretested in the ABB factory. In addition, they are easy to transport within a standard gauge. This significantly reduces site works and commissioning time by allowing the handling of multiple sites in parallel.

“Extending railway electrification across Europe and beyond is key to creating a green transport network,” Antonio Colla, Global Railway Marketing and Sales Manager at ABB, said. “Our technology will ensure a reliable, safe, and efficient service while delivering sustainable mobility for the millions of passengers and freight who use this line every day. It supports our customers’ green ambitions and demonstrates what can be achieved through innovation and collaborative working. Lithuania is now well on track to electrify over a third of its rail network by 2030.”

The Lithuania project is indicative of ABB’s continued involvement in major rail infrastructure projects across the globe. Most recently, the business was awarded a landmark contract from Stadler Valencia worth $170 million to enhance Europe’s railway network. This follows recent high-profile installations with Swiss Federal Railways and Metro Trains Melbourne.