Webuild have been awarded a contract to design and construct the Nuova Enna-Dittaino, a new section of the Palermo-Catania rail line. 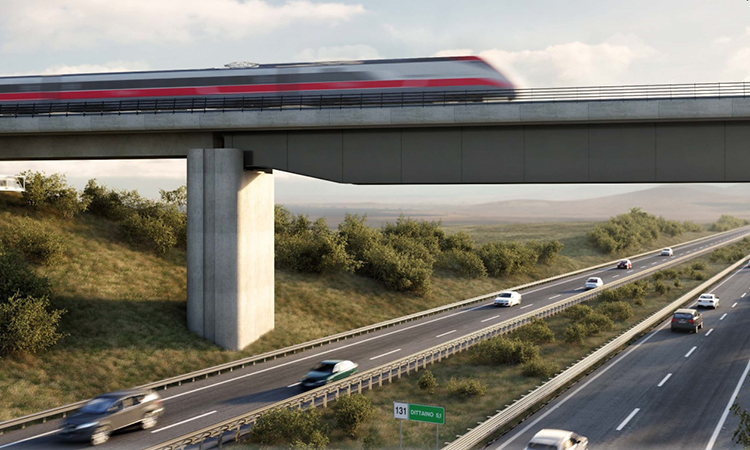 Webuild and its consortium partner have been awarded a €616-million contract to design and build a section of the Palermo-Catania rail line. The sustainable mobility contract will help make trains travel faster, safer, and more punctual between the two Sicilian cities. The section, known as Lot 4b, covers the design and construction of the Nuova Enna-Dittaino. Webuild will lead the consortium with a 70 per cent stake, with partner Pizzarotti having the remaining 30 per cent.

Commissioned by Rete Ferroviaria Italiana (RFI) of the Italian state railway operator Gruppo Ferrovie dello Stato Italiane (FS), the contract will also be financed from Italy’s National Plan for Recovery and Resilience, (PNRR in Italy). Works will start after design which is expected to begin before year-end. The construction of Lot 4b is expected to create 650 jobs, direct and indirectly, and involve a supply chain of 100 companies. Webuild is already involved in the construction of the Bicocca Catenanuova, another section of the same Palermo-Catania line.

Key features of the bid under consideration include the quality of the design and the sustainable solutions to minimise the impact that the construction of the section will have on the surrounding area. Processes that contribute to the principles of a circular economy are another feature, such as the reuse of 99 per cent of all the earth excavated, the recovery and reuse of rain and industrial water, energy consumption efficiency as well as the use of solar panels.

The Palermo-Catania railway belongs to an initiative within the European Union to develop a sustainable mobility network called the Trans-European Transport Network (TEN-T). Webuild is contributing to the development of the network in other parts of Italy on projects such as the Genoa-Milan High-Speed, High-Capacity Railway Line, (also known as the Terzo Valico dei Giovi Genova Junction), several important sections of the Brenner Base Tunnel in the northeast, and a number of sections of the high-speed railway between Naples and Bari in the south.